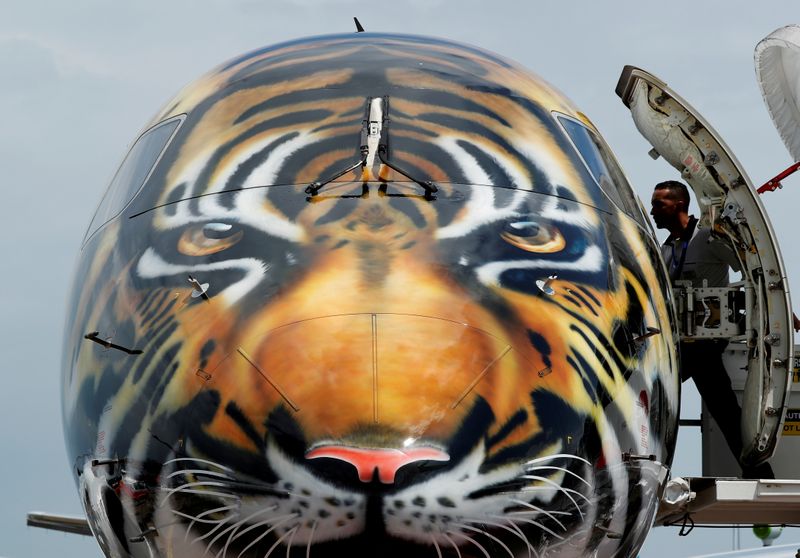 SINGAPORE (Reuters) – Some of the world’s biggest aircraft buyers are urging the European Union to clear Boeing’s tie-up with Embraer, fearing Embraer’s commercial aviation business would struggle on its own now Airbus has swallowed its main competitor in regional jets.

Airbus (PA:), Europe’s biggest planemaker, on Thursday increased its controlling stake in the A220 regional jet program – Embraer’s main rival – as Canada’s Bombardier (TO:) sold out of the project it had set up.

That deal leaves Embraer looking increasingly exposed, despite its long history as an independent manufacturer, and ratchets up pressure on the Brazilian company and U.S. giant Boeing to complete a similar tie-up, buyers and analysts said.

Their $4.2 billion deal would in part see Embraer (SA:) cede 80% of its commercial arm to Boeing. It has been slowed by an EU competition probe expected to last until the end of April.

The EU is worried that whirlwind consolidation triggered by Bombardier’s decision to exit the market over losses would leave airlines too little choice, cutting the number of key suppliers from four to three, and then just two if Embraer is swallowed.

But in an unusual twist – as buyers typically favor greater choice of suppliers – airlines and lessors contacted by Reuters backed the Boeing-Embraer deal, expressing fears whether Embraer would be able to offer an indefinite alternative to a jet now backed by a much larger manufacturer.

“Now you have got the heavyweight boxer in the ring with someone who is about seven divisions lighter – there is only one outcome,” said Aengus Kelly, chief executive of leasing giant AerCap (N:), the world’s largest buyer of commercial planes.

Kelly urged the European Commission to back the deal.

“I think it’s a must: if Embraer don’t do it, it’s likely that Airbus will corner part of the narrowbody market which will be poor for the consumer,” he said in a telephone interview.

“It just won’t happen that Embraer is a viable long-term competitor, standalone, against the power of Airbus.”

Embraer and Airbus had no immediate comment. Boeing (N:) declined to comment. The EU is expected to restart its probe into the Boeing-Embraer deal next week after halting the process while waiting for data, a person familiar with the matter said.

While the top planemakers have been severely tested by crises over Boeing’s grounded 737 MAX and a bribery scandal at Airbus, their duopoly in the market for large jets is intact as evidenced by big displays at this week’s Singapore Airshow.

Competing just below them in the market for 100-150-seat regional jets are the upgraded Embraer E2 family and all-new Bombardier CSeries, renamed A220 under Airbus.

The financial firepower required to develop a jet proved too much for Bombardier and accelerated matchmaking between Boeing and Embraer, which risks being left in the cold if it fails to come under Boeing’s wing, analysts said.

“They’d have a future, but it would get harder and harder to stay competitive as Airbus uses its muscle to lower A220 costs and prices,” said Teal Group analyst Richard Aboulafia.

“That was always the problem for both smaller jet makers: they could never get costs in line with the big two, because they never had volume to negotiate aggressively with suppliers.  That’s changing for the A220, and must change for the E2. Otherwise, they’d lose market-share, profits, or both.”

If he is worried, Embraer’s ebullient commercial aviation chief John Slattery was not giving anything away as he marketed the E195-E2 at the Singapore show.

He declined to comment on the implications of the EU review beyond saying Embraer would cooperate.

But others say uncertainty over the fate of the Boeing deal leaves a sword hanging over the Brazilian planemaker.

“It’s distracted running a process rather than a business. Let these two grown-up players work it out,” said Martin Moller, founder of the world’s largest regional aircraft lessor Nordic Aviation Capital, which owns or manages 175 Embraers.

“Let the free market rule. My favorite airplane is the right plane for the mission,” he added.

Though the Boeing-Embraer deal would cut the number of plane suppliers, airlines say the unique barriers to entry and winner-takes-all mentality of aviation mean playing off the two ultra-competitive industry giants in negotiations can lower prices to levels that standalone smaller competitors cannot match.

“I prefer to have two players really competing than two and a half players failing to do so,” said Antonoaldo Neves, chief executive of airline TAP Portugal.

Price is not the only factor. Credit costs, maintenance and performance guarantees are all likely to be better under Boeing than Embraer can offer by itself, Neves told Reuters.

Not everyone agrees the deal should go ahead. Brazilian prosecutors on Thursday asked local regulators to reconsider their approval, citing omissions in the arguments.