Home
Stocks
Need to Know: Hedge funds late to the party as gold breaks key $2,000 level
Prev Article Next Article
This post was originally published on this site

So the question is whether the gold rally can last.

What has fueled it so far is the aggressive fiscal and monetary policy action, in the U.S. and across the world, which has helped cushion the economic blow from COVID-19 and sent interest rates lower but also led to a rise in inflation expectations. 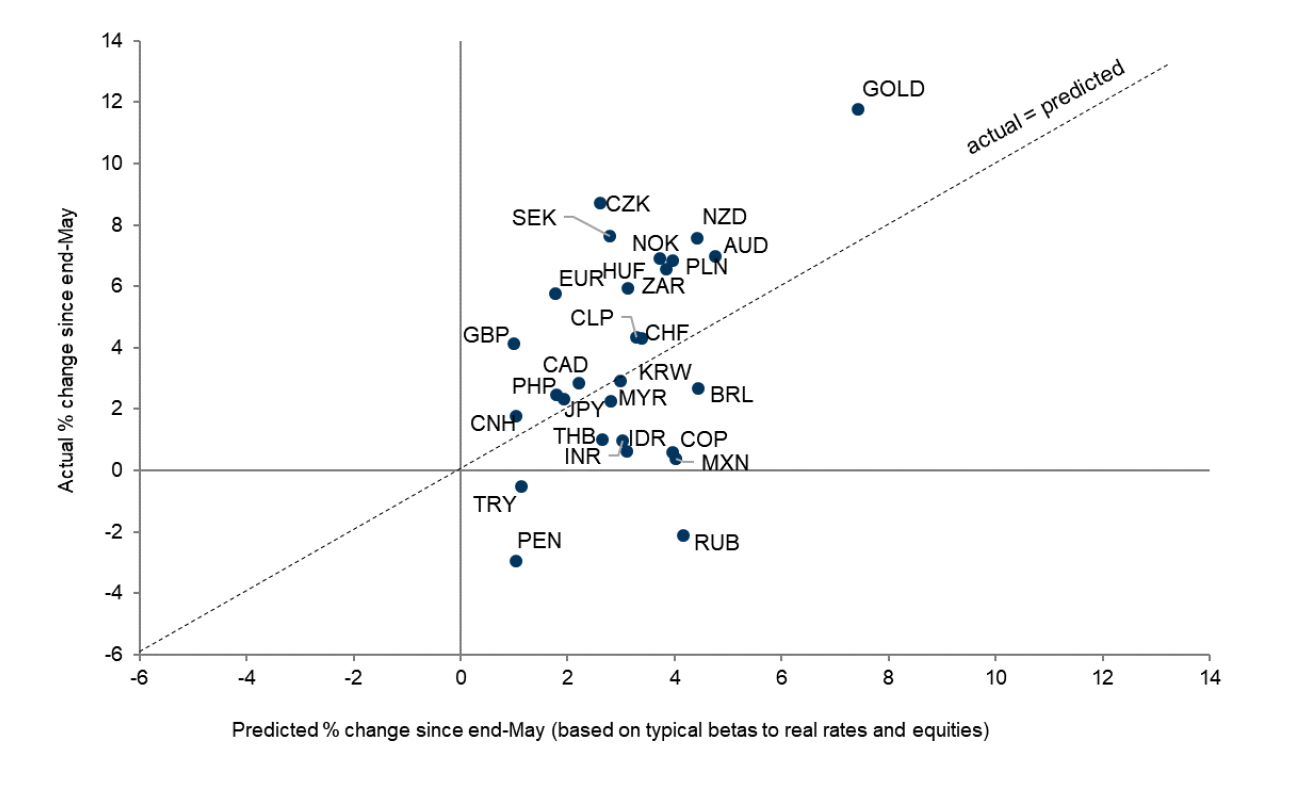 Gold has been outperforming the dollar alternatives, according to Goldman Sachs commodities analysts.

Still, gold of late has caught its own momentum apart from its fundamentals. Analysts at Goldman Sachs point out gold has broken away from real, or inflation-adjusted, interest rates, and it is outperforming dollar alternatives. 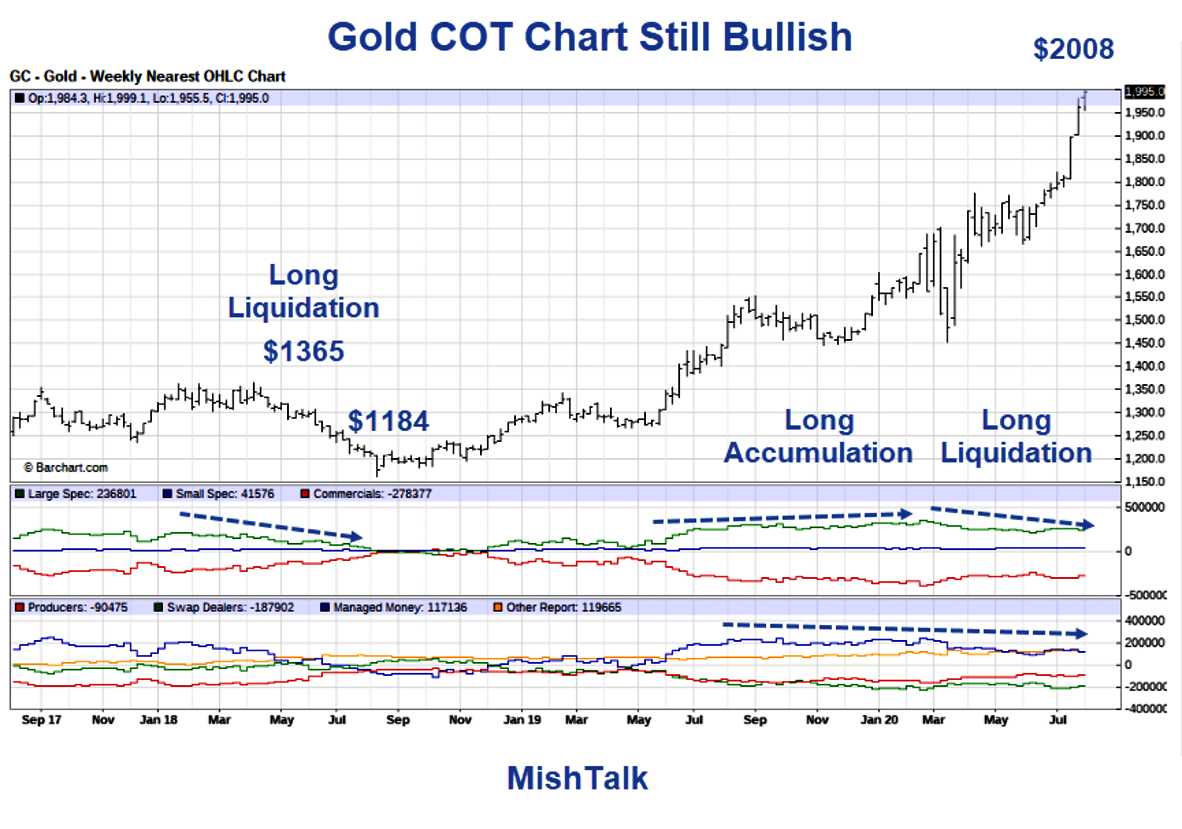 Mike Shedlock, the Mish Talk blogger and investment adviser at SitkaPacific Capital Management, points out that hedge funds have largely sat out the gold rally. He bases that on Commodity Futures Trading Commission data on futures positions.

“There is ample room for Fear of Missing Out to kick in as the managed money and big spec hedge funds sat out much of the recent rally,” he writes. “And with 105,025 short contracts there is plenty of fuel for a short squeeze too.”

Stimulus talks will continue to steal the spotlight. White House chief of staff Mark Meadows said Tuesday’s session was “probably the most productive meeting we’ve had to date,” as Senate Minority Leader Chuck Schumer said both sides made compromises.

There was a number of corporate earnings releases on Tuesday night. Walt Disney Co. DIS, +0.80%, the entertainment giant, said it was profitable during the quarter once a $4.95 billion impairment charge was stripped out, and it announced it will release its live-action “Mulan” on pay per view to its Disney+ service.

Payments company Square SQ, +1.50% reported a faster-than-forecast 64% revenue rise, Nikola Corporation NKLA, +6.44% didn’t pin down when its battery-powered electric truck will be released, and Beyond Meat BYND, +5.90% reported a wider-than-forecast loss as the plant-based-food maker kept its financial guidance suspended. There also was a wave of corporate earnings from overseas, with U.S. supermarket operator Ahold Delhaize AD, +6.68% lifting its annual guidance.

Teladoc Health TDOC, +5.17% is buying Livongo Health LVGO, +5.78% for $18.5 billion in cash and stock, in a deal combining digital providers of health advice.

The economics calendar includes the ADP private-sector payrolls report for July, the trade deficit for June, and the July reading of the Institute for Supply Management’s nonmanufacturing index. The final reading of the eurozone services purchasing managers index came in weaker than the flash estimate, but still higher than June levels. China’s services PMI missed estimates and was lower than June.

Rep. Roger Marshall defeated former Kansas Secretary of State Kris Kobach in the Republican primary for an open Senate seat, which is seen as improving the Republicans’ chances to hold their majority in the upper chamber. Also of note, Missouri voted to expand Medicaid access to low-income adults, becoming the 38th state to do so. 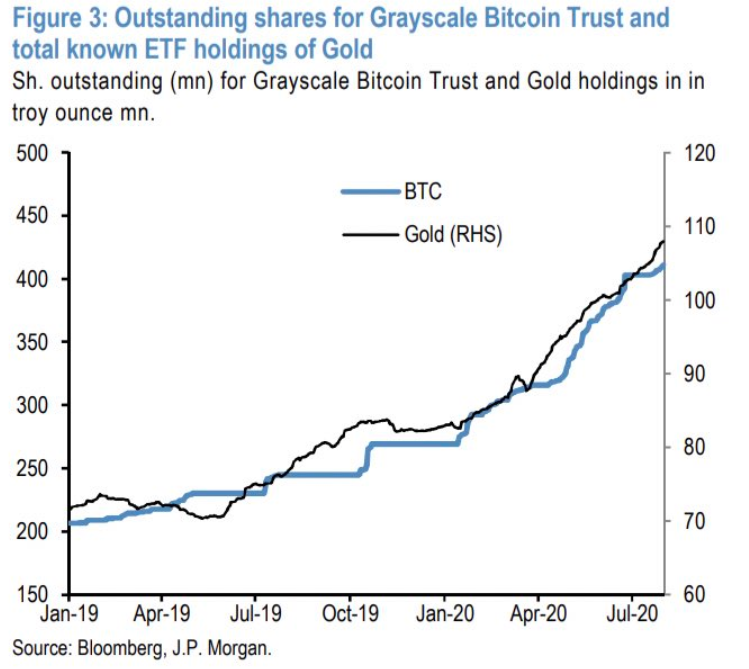 JPMorgan strategists led by Nikolaos Panigirtzoglou say while older people are flocking to gold, younger investors led by millennials are turning to bitcoin BTCUSD, +1.96%. Both gold and bitcoin exchange-traded funds have seen strong inflows over the last five months. It should be noted Panigirtzoglou says bitcoin is now trading at a premium, rather than a discount, to the cost of production.

The explosions at Beirut port on Tuesday struck Lebanon, which is mired in its worst economic crisis for decades and a currency collapse.