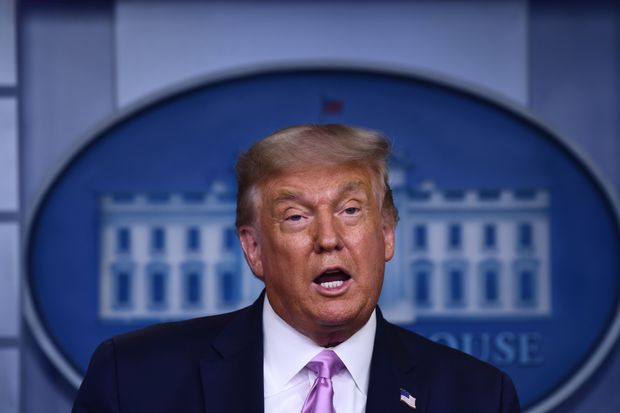 President Donald Trump speaks to the press Tuesday at the White House.

“She was my No. 1 draft pick,” Trump said. “She did very very poorly in the primaries, as you know.”

Harris dropped out of the Democratic primary in December, before any votes were cast. Trump referred to Harris as “one of the most liberal” senators, calling her a “big tax raiser” and a “slasher of funds for the military.”

“I thought she was the meanest, most horrible, most disrespectful of anybody in the U.S. Senate,” Trump said, referring to Harris’ comments during Brett Kavanaugh’s Supreme Court nomination hearing.

“I like Vice President Mike Pence much better,” Trump said. “He’s solid as a rock.”

Biden, the presumptive Democratic presidential nominee, named Harris as his running mate after months of speculation. Harris is the first Black woman nominated as vice president by a major U.S. party. She said on Twitter that Biden “can unify the American people because he’s spent his life fighting for us.”

“And as president, he’ll build an America that lives up to our ideals,” she added. “I’m honored to join him as our party’s nominee for Vice President, and do what it takes to make him our Commander-in-Chief.”

Trump appeared at the briefing for around 30 minutes. He touted U.S. progress on fast-tracking COVID-19 vaccine candidates, including a Tuesday deal with Moderna for the U.S. to purchase 100 million doses of the company’s vaccine, upon approval.

Trump also repeated his claim that testing is the reason that U.S. coronavirus cases are higher compared to the rest of the world. He began the briefing discussing protesters in cities like Portland, New York and Seattle, arguing Democratic politicians were not doing enough to stop “anarchists.”

“They want to pass federal legislation gutting and hamstringing every police department in America,” Trump said.