Home
Stocks
FA Center: These 15 stocks are ready to ride the bull market’s next leg up
Prev Article Next Article
This post was originally published on this site

Investors looking for stocks that will shine as the bull market continues would do well to focus on market liquidity. That’s because there are certain stocks that suffer a lot when liquidity dries up, like it did this past March, but then outperform the market the rest of the time.

Liquidity is the ability to buy or sell a large number of shares without impacting price. When liquidity is plentiful, you can get into and out of stocks with hardly any impact. When liquidity evaporates, your trading costs can balloon.

The insight that stocks behave in predictable ways to changes in market liquidity traces to a 2003 study by finance professors Lubos Pastor of the University of Chicago and Robert Stambaugh of The Wharton School of the University of Pennsylvania. While their research is widely known, at least on Wall Street, exploiting it is difficult because there is no publicly available database that lists each stock’s sensitivity to changes in market liquidity — its liquidity beta, in other words.

This lack of information is perhaps one reason why liquidity beta continues to play a powerful role in explaining why certain stocks perform better than others. Indeed, Stambaugh has told me that this liquidity effect that he and Pastor discovered has been stronger since they published their original research. This is noteworthy because it’s all-too-common for Wall Street patterns to weaken, or disappear altogether, after they are discovered.

To illustrate the potential of focusing on liquidity, consider a package of 10 stocks with high liquidity betas that I listed in one of my columns earlier this year for Barron’s. Entitled “Stocks to Buy When the Bear Market Is Finally Over,” the column happened to be published on the exact day of the bear market low — March 23. Since then (through Aug. 18) those 10 stocks have produced an average gain of 70.9%, versus 52.6% for the S&P 500 SPX, +0.34% . (Dividends were included in these calculations.) (See the chart below.) 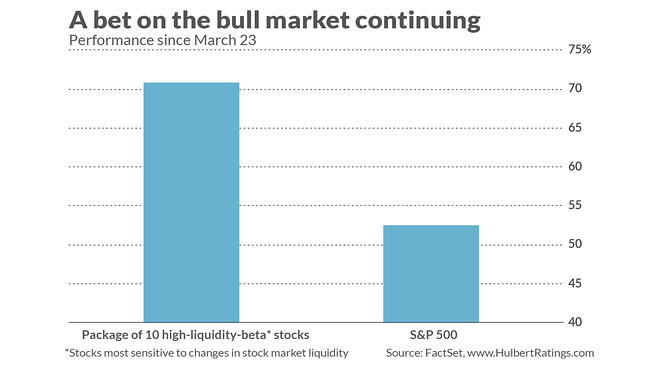 Keep in mind that high-liquidity-beta stocks aren’t a completely free lunch. Their above-average return during bull markets is compensation for the risk of losing a lot during liquidity crises. So you shouldn’t consider investing in such stocks if you have a low tolerance for that risk. If you do have such tolerance, or if you are confident that a liquidity crisis is unlikely any time soon, then you might want to consider high-liquidity-beta stocks.

Accordingly, I have updated my analysis from earlier this year, taking into account how stocks performed when liquidity dried up in March. I calculated the liquidity beta for each of the stocks in the S&P 500, using the formula the professors employ in their study. Below are the 15 stocks with the highest liquidity betas, listed in descending order:

One word of caution: Even though liquidity betas are important, they are not the only factor you should consider when constructing your portfolio. So consider these and other high-liquidity-beta stocks only in the context of the other indicators you already use.

More: You’re loving high-flying growth stocks now, but your money should be in these companies, this market pro says

Plus: ‘A tale told by an idiot’ — CNBC’s Jim Cramer urges investors not to be fooled by new highs in the stock market