Home
Market
'All girls, buy it!' In China, Perfect Diary gives cosmetics world a makeover with live streams, low prices
Prev Article Next Article
This post was originally published on this sitehttps://i-invdn-com.akamaized.net/trkd-images/LYNXMPEG7P07V_L.jpg 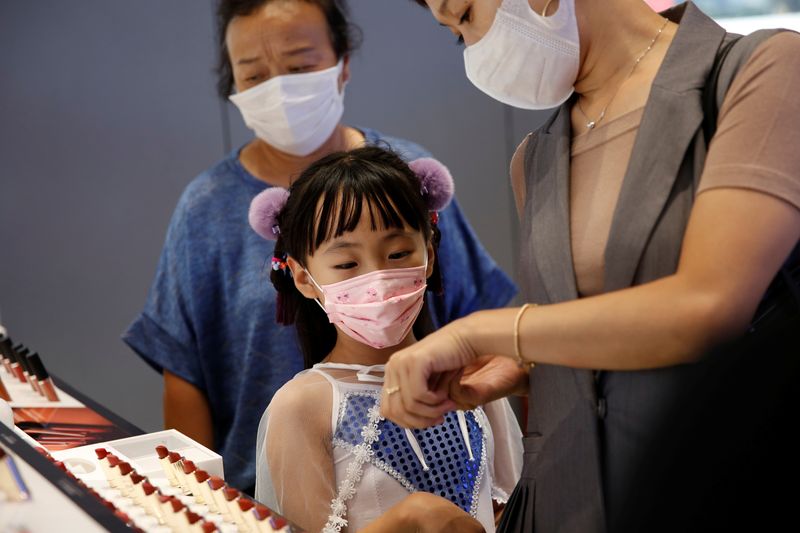 BEIJING/HONG KONG (Reuters) – With chat groups, video streams and low prices for foundation, China’s Perfect Diary has emerged from nowhere four years ago to become a cosmetics giant for the digital age, trailing only L’Oreal and LVMH in the world’s no. 2 market for make-up.

Wen has ditched Western brands like NARS and Revlon and devotes her annual budget of 3,000 yuan ($434) to Perfect Diary cosmetics like eyeshadow palettes. Most cost less than 100 yuan and are made by the same contract manufacturers that supply Western brands.

She converted to Perfect Diary after a room-mate’s tip. “The foreign brands have a large variety of foundations that often confuses me and I can’t tell which one is best on me … The Chinese brand knows what is good for local consumers.”

Though still a global minnow compared with powerhouse L’Oreal, Perfect Diary now has 4% of the Chinese market for colour cosmetics, according to Euromonitor 2019 data. That ranks it joint third with Estee Lauder (NYSE:EL)’s MAC, beaten only by luxury giant LVMH’s Christian Dior and three L’Oreal brands that stack up to more than 20%.

The research firm estimates the overall market more than doubled from 2015 to nearly $8 billion in 2019 – and will mushroom to almost $15 billion in 2024 as China’s middle class expands.

Perfect Diary’s rise has been fuelled by blending low prices and social media platforms like Douyin – TikTok for China – and WeChat, collecting customer data it can use to design and roll out new products rapidly, helped by charismatic influencers with huge online followings like ‘Lipstick King’ Li Jiaqi https://www.weibo.com/u/1968758563?is_all=1.

“Gen Z is growing up in a prosperous China,” said Mei Xin, analyst at Huatai Securities. “Unlike the older generation, they don’t believe the moon in the West is rounder than in China.”

A spokesperson for L’Oreal in China didn’t immediately respond to a request for comment on the growth of homegrown brands, but said L’Oreal typically welcomes healthy competition.

Founded by entrepreneur Huang Jinfeng’s Yatsen E-Commerce firm in 2017 as an online, China-focused operation, the company now also has more than 150 stores in China – with a target of 200 this year – as well as international aspirations.

“Yatsen E-Commerce has always had a vision of creating a domestic beauty brand with true international influence,” Huang told Reuters.

In recent months, it has opened its own online store for Southeast Asia countries including the Philippines, Singapore and Malaysia. It also has an official store on Lazada, Alibaba’s Southeast Asia arm.

“We listen to users and we immediately carry out research on products they want,” said Huang, citing the example of data gathered during the coronavirus pandemic that resulted in a new pressed face powder.

Perfect Diary currently uses contract manufacturers including Milan-headquartered Intercos，which has a factory in China that supplies L’Oreal and others. Since March it been building its own plant in Guangdong, due on line by end-2021.

Already backed by investors like Hillhouse Capital, Sequoia Capital, Tiger Global Management, Boyu Capital and Chinese Culture Group, Yatsen is currently raising a pre-IPO round that values it at around $4 billion, according to two people with direct knowledge of the matter.

It has also appointed Goldman Sachs (NYSE:GS) and Morgan Stanley (NYSE:MS) to lead a Hong Kong IPO that aims to raise up to $500 million by the end of 2020, according to two separate sources.

The people declined to be named because the information was not public. Perfect Diary declined to comment on IPO plans.

“I don’t care much about the originality of a brand,” she said.

“I didn’t know Perfect Diary was a Chinese brand the first time I bought it. But now I know, I have a natural good feeling about using a domestic brand.”