Home
Stocks
Your Digital Self: New Tesla rival Polestar loads up on digital technology and sustainable materials
Prev Article Next Article
This post was originally published on this site

Even if you don’t care much about cars, chances are that concept models will at least make you go “ooh” with delight.

They are often made to showcase cutting-edge technology, a new direction in design or some other radical move the car maker is considering. Displaying the cars at auto shows serves to gauge potential customers’ reaction, which in turn helps manufacturers discern if new ideas will be accepted by the target demographic. More often than not, concept models are scrapped, though pieces of tech and design get embedded in commercial models.

The Polestar Precept was supposed to be one such concept vehicle. Presented by Volvo’s ex-head of design and Polestar CEO, Thomas Ingenlath, the Precept is an indicator of what future Polestar cars will look and feel like.

Polestar, Volvo’s standalone performance and electric-vehicle brand, is planning on building three cars: Polestar 1, Polestar 2 and Precept. (Polestar is jointly owned by Volvo and Geely Holding Group of China.) Tesla TSLA, -0.19%  gets most of the electric-car press for new technology, but Polestar is aiming to change that. 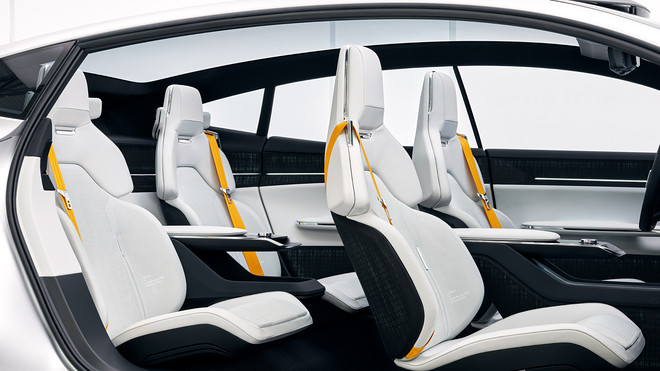 The Precept interior, with seating for four.

Knowing that your car is built on sustainable foundations is a big factor for many modern buyers. While Polestar (and the rest of the automotive industry) has not found a way to make lithium-ion electric-vehicle (EV) battery production less harmful for the environment, it has done an extraordinary job at making other components as eco-friendly as possible.

The company has utilized a flax-based natural composite material so extensively that its use reduces the car’s interior component weight by 50%, with an 80% reduction in plastic, compared with the weight of materials traditionally used by the car industry.

The seat covers are 3D-knitted from 100% recycled PET bottles in a single thread, made exactly to size with no waste or off-cuts. Recycled plastic bottles are used for the headlining textile, while the carpets are woven from Nylon 6, recovered from reclaimed fishing nets.

Finally, waste and recycled cork from the wine industry are converted into a cork-based vinyl for seat bolsters and head rests. Because of the lower weight of materials and fiber-reinforcement technology, vibration is reduced, and safety in crashes is enhanced.

The Precept extensively relies on Android Automotive, the native infotainment system of Alphabet’s Google GOOG, -1.14%   GOOGL, -1.12%, which translates to superior voice recognition with support for a growing number of languages, dialects and accents, as well as enhanced integration of Google maps with the vehicle’s ADAS (advanced driver assistance systems). These systems provide notifications, warnings and assistance with braking and steering. Google maps enhances the features by offering traffic data, which enables safer maneuvering and visualizing the combined data in the driver display.

Speaking of displays, Precept has two. 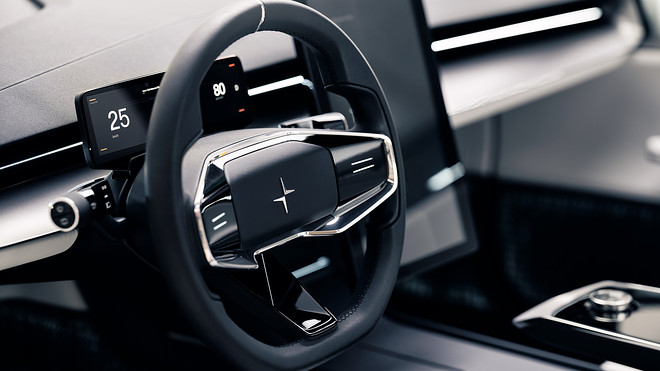 The main nine-inch horizontal driver display features vital information, enhanced by eye-tracking technology. Eye-tracking monitors where the driver is looking, and adjusts the way notifications are shown; they are more detailed when driver is focused on the display, and larger and brighter when he is focused on the road.

A secondary 15-inch vertical display is also enhanced, this time with proximity sensors that recognize hand proximity. It switches to show relevant information. For example, if the screen displays album art of a song that’s currently playing and a driver or a passenger reaches toward the screen, the display will switch to volume and navigation buttons, enlarging them for easier use.

One peculiar thing is access to video streaming for infotainment purposes, which Polestar envisions to be available only during charging or while the car is parked.

The Precept does not have mirrors in a traditional sense. Instead, rear and side cameras feed into digital interior mirrors. Instead of being hidden, the rest of the sensors are featured as premium design elements (dubbed SmartZone), and special attention was paid to implementation of the Lidar pod (light detection and ranging sensor). Although the sensors are often clunky and usually hidden on vehicles, Polestar decided to prominently feature the pod on the roof of the car.

The Lidar pod is an important element, since it’s vital for the navigation of self-driving cars. While it hasn’t explicitly said Precept will be such a car, Polestar has acknowledged that the pod is here to support the “future advanced driving technology.”

The Polestar Precept is a beautiful car. Its minimalism and futurism are unified in one high-tech chassis boasting unique materials and slippery aerodynamic efficiency. Chrome, leather and wood are ousted — both from the exterior and interior. Instead, the design relies on an interplay of gloss and matt surfaces using sensors and lighting technology as premium details.

Because the car features side and rearview cameras, there was no need for a rear window. Instead, the back is reinforced, providing the structural foundation for a glass roof as well as a larger tailgate opening.

Aerodynamics are achieved through multiple design features: a front wing integrated into the car hood, and air ducts in front and behind the front and rear wheels, which enable better brake-heat dissipation and enhanced laminar flow around the Precept, to taillights going down the full width of the car, embedded into vertical air blades. This reduces drag and resistance and increases the EV’s range.

Overwhelmingly positive feedback pushed the Chinese-owned company into setting up full production for the four-seat electric GT. The car will be produced in China, and we can expect to see it on the market in about three years. This makes sense: The Precept, although futuristic, isn’t so far removed from reality that it looks unwieldy or otherworldly. Its futuristic, yet restrained, design fits perfectly the image of cars we want to see in near future, and it’s built on principles we want to see adopted in the car industry.

What do you think about Precept? Let me know in the comment section below.