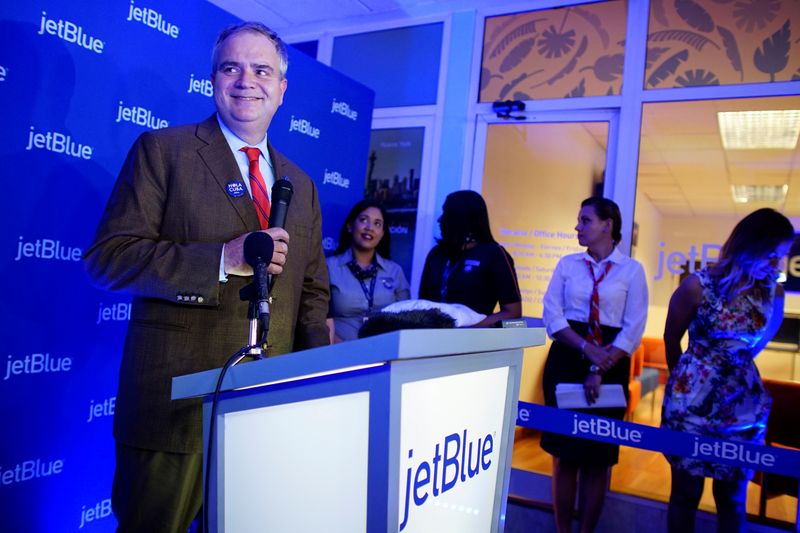 (Reuters) – JetBlue Airways (O:JBLU) will continue limiting the number of seats it sells on each flight into early next year, Chief Executive Robin Hayes told Reuters on Wednesday, citing the role the policy plays in customer confidence.

The decision sets it apart from low-cost peer Southwest Airlines (N:LUV), which last week said it would stop blocking middle seats on Dec. 1, referencing recent medical research showing that the risk of contracting the coronavirus on airplanes is very low.

“Our view is that over the course of time the seat caps will go, but right now it’s a very important issue for customer perception,” Hayes said in an interview.

Hayes warned, however, that the policy is “incredibly expensive, especially in an industry that’s struggling.”

JetBlue posted on Tuesday a $393 million net loss in the third quarter as a slump in travel demand due to the pandemic hit revenues. Like other airlines it is burning millions of dollars of cash every day.

Hayes said he expects JetBlue’s business to be “largely recovered” by the end of next year given the low-cost carrier’s focus on domestic leisure travel, which is expected to recover before corporate and international travel.

Business travel accounts for less than 20% of JetBlue’s flying, he said.

JetBlue, which is currently capping its seating capacity on flights at 70%, will review the policy in the first quarter of 2021, Hayes said.

Among other airlines, Delta Air Lines (N:DAL) and Alaska Airlines (N:ALK) will continue restricting seating capacity on their planes through at least Jan. 6. Hawaiian Airlines (O:HA) is also blocking seats, while American Airlines (O:AAL) and United Airlines (O:UAL) are not.