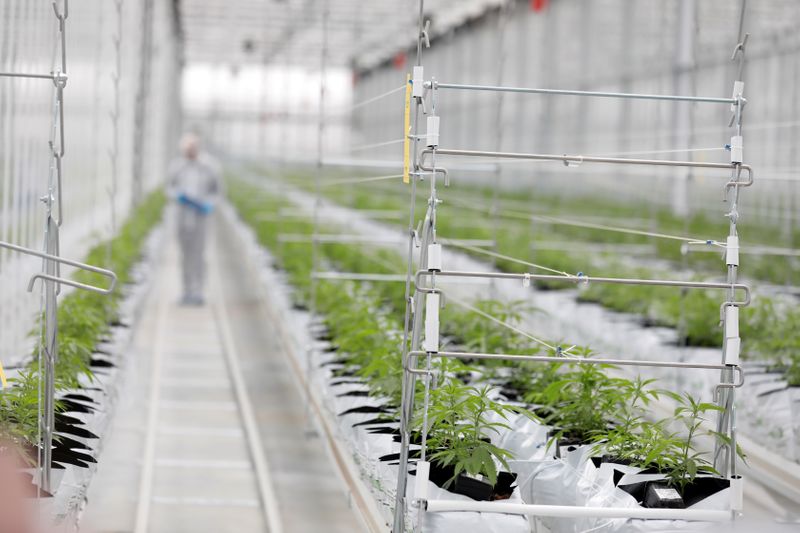 (Reuters) – Votes to legalize marijuana on Tuesday by a handful more U.S. states should spur further development of the industry and possibly bring changes at a federal level, even if pro-decriminalization candidate Joe Biden loses his bid for the White House, according to industry executives and analysts.

Consumer demand and the promise of tax revenue are leading more states to embrace pot, which then leads other states to follow suit, making what happens at the local level more important, they said.

Shares of U.S. companies with footprints in multiple states, including Curaleaf Holdings (OTC:CURLF) Inc (CD:CURA), Cresco Labs Ltd (CD:CL) and Green Thumb Industries Inc (CD:GTII), were all up on Wednesday after voters in Arizona, Montana, New Jersey and South Dakota chose to legalize recreational use.

The votes should add steam to an industry now pushing hard for new federal legislation.

“As long as there is strong consumer demand, the industry will continue its upward growth trajectory and the pathway to legalization will likely speed up regardless.”

For example, approval in New Jersey is expected to open up other eastern states, such as New York and Pennsylvania, said Salvator Armenia, vice president of business development at producer C21 investments (CD:CXXI). Those states and nearby Connecticut already allow marijuana sales for medical purposes.

Tuesday’s votes takes the tally of U.S. states where recreational use will be legal to 15 plus the District of Columbia. Mississippi voters also backed legalizing cannabis for medical use, while Oregon voters approved legalizing the psychoactive substance psilocybin found in “magic mushrooms.”

The “total addressable market” in those five states alone is considered to be as large the entire Canadian cannabis market, worth a potential $5 billion to $9 billion annually, Armenia said.

The path to federal legislation that would allow cannabis companies to bank and trade freely is still unclear, with Republican Senate Majority Leader Mitch McConnell a major opponent. Republicans appear poised to retain control of the senate.

Michael Underhill, chief investment officer at Capital Innovations, cautioned that several bills would need to pass before U.S. companies found themselves on the same regulatory playing field as their Canadian counterparts.

“Each election cycle cannabis comes closer to federal acceptance, and this election is pivotal to those goals,” said Cynthia Salarizadeh, founder and president of House of Saka, a cannabis-infused beverages business.

Cannabis sales have surged with people stuck at home during the coronavirus pandemic. In California, sales data for August showed a 26% jump over the past year, while sales in Nevada were up 34%, according to BDS Analytics.

Alcohol and tobacco companies have taken notice, with some investing in the sector. Drinks maker Constellation Brands (N:STZ) has a stake in Canopy Growth Corp (TO:WEED) (N:CGC), while Marlboro maker Altria (N:MO) has a stake in Cronos Group Inc (TO:CRON).

Still, federal decriminalization, or legalization in more states, would not be without challenges, investors said. Many point to Canada as an example.

Though the country became the first G-20 nation to legalize recreational use of cannabis in 2018, regulatory hiccups in Canadian dispensary rollouts, slow international legalization, and a lack of profitability sent investors packing over the next year. That left most companies at a fraction of their market values by the beginning of 2020.

Shares of Canada-based pot producers and distributors, including Canopy, Cronos, Aurora Cannabis (N:ACB) and Tilray (O:TLRY) all fell on Wednesday as the chances of a swift victory for Biden faded.