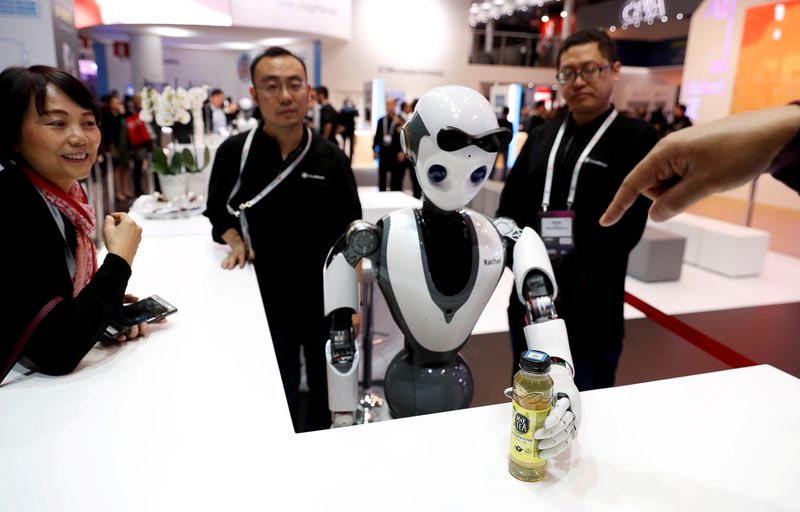 TOKYO (Reuters) – The U.S. unit of SoftBank-backed robotics startup CloudMinds has changed its name to distance itself from the blacklisted China-based firm, two people with knowledge of the matter said, and is selling face-scanning temperature monitors through T-Mobile US (NASDAQ:TMUS).

The unit is selling its cloud-connected products under the new name at a time of heightened concern in the United States about the national security risk of Chinese firms collecting and using the personal data of U.S. citizens.

Documents filed in California showed the unit became Wright Robotics in August, after the United States in May added CloudMinds to its so-called Entity List citing the risk of the firm procuring items and technology for China’s military.

The United States can restrict sales to blacklisted firms of goods made domestically as well as goods made abroad containing U.S. technology.

It expanded the definition of military end use in April to include any firm that supported the maintenance or production of military items even if they primarily did commercial business.

CloudMinds has since been bailed out by a state-backed fund in Shanghai as part of Chinese government action to prop up such firms, said two other people familiar with the matter.

It has also been on a promotional drive by marketing its technology as a coronavirus countermeasure, with the U.S. re-branding to Wright Robotics an attempt to avoid negative baggage associated with the CloudMinds name, the first two sources said.

Wright Robotics markets its temperature scanners as designed in California. Advertised features include facial recognition, data management, remote monitoring and, with its most advanced models, the ability to scan large numbers of people at locations such as transport hubs and shopping centres.

It is not clear how much personal data the devices can collect. Neither Wright Robotics nor CloudMinds – which is incorporated in the Cayman Islands but has the bulk of its workforce and revenue in China – responded to requests for comment.

In support of the devices, a testimonial on Wright Robotics’ home page from “Sheila H.” reads, “We decided to get this one because their company is in California. I saw other products have an issue with tech support or after-sales because the sellers are in China.”

Temperature scanners are a far cry from CloudMinds’ ambition to offer an “end-to-end cloud robot system”. Attempts to sell a modified version of SoftBank’s Pepper were hampered by technical problems and the firm struggled to find a market outside of China, Reuters previously reported.

The firm was blocked from exporting U.S. technology to China last year before the blacklisting, and laid off most of its U.S. staff. During a failed attempt to list in the United States, it identified its local unit as CloudMinds Technology Inc.

The unit partnered with Sprint, owned by SoftBank until the April closure of the wireless carrier’s merger with T-Mobile US Inc. SoftBank retains a stake in the merged entity.

Wright Robotics touts its scanners as “T-Mobile 4G LTE ready” and sells them through the T-Mobile IoT Marketplace.

Weeks before the blacklisting, but after Reuters reported its export restrictions, CloudMinds was granted a $1 million to $2 million loan under a pandemic aid program, showed Treasury data from August.