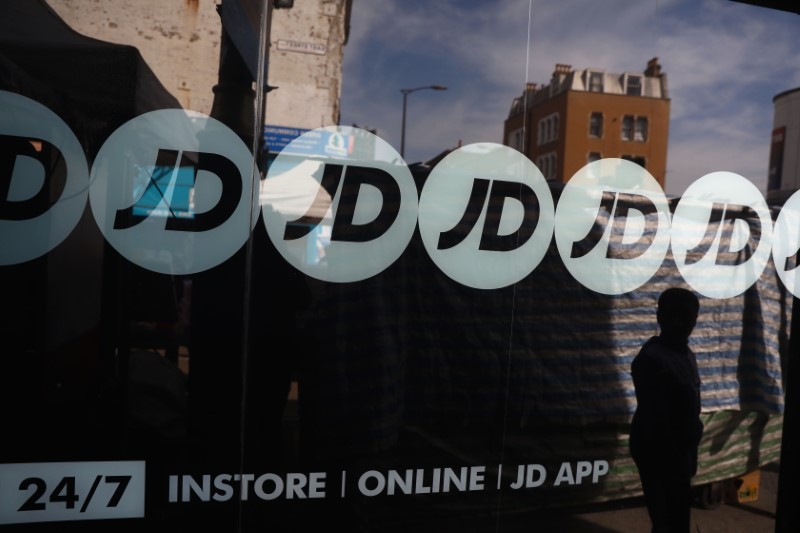 Investing.com — Two separate reports out of the U.K. threw a harsh, if predictable, spotlight on the outlook for the retail sector this year.

JD (NASDAQ:JD) Sports Fashion (OTC:JDSPY) hit an all-time high with a 4.6% rise after upgrading its profit forecast for the year ending January 31 and, more importantly, predicting another solid increase in profit in the coming year.

The latter part of that guidance is remarkable for two reasons. First, it suggests that there is no end in sight to the trends that drove retail stocks in 2020: an ever-accelerating transition to online channels (which JD has managed with obvious skill), and an increased share in overall retail spending for sports and leisure gear over more formal dress.

Second, it marks a big contrast from the first wave of the pandemic, when all but the boldest companies completely suspended their guidance. In JD’s home market of the U.K. right now, new cases of Covid-19, hospital admissions and deaths are all running at levels well ahead of the 2020 peak, and yet JD appears to have no qualms about forecasting results 13 months ahead.

JD said profit before tax for the current year will be over 400 million pounds ($540 million), more than one-third above the street consensus. Such a big revision so late in the fiscal year is a powerful statement as to the underlying momentum of the business.

It also said it expects pretax profit to rise by between 5%-10% in the coming year, despite assuming that its U.K. stores will remain closed for the next three months.

But investors should avoid rushing to conclude that the broader retail sector is out of the woods. British Land (OTC:BTLCY), the U.K.’s largest commercial landlord, said on Monday that it collected only 46% of rent due from its retail clients in December, as the U.K. government’s pre-Christmas lockdown hit, breaking what had previously been a steadily improving trend.

The company had had to forgive 12% of rent due from retailers in the spring, a number that fell to only 6% in the three months through September and nearly nothing in the subsequent three months. However, as of last Friday, less than one-third of the retail stores in its portfolio were open, and that seems unlikely to improve any time soon, given that the country’s chief medical officer Chris Whitty warned on national radio Monday that “The next few weeks are going to be the worst weeks of this pandemic.”

That all suggests that more distress on Main Street is likely in the short run – a factor that JD, among others, appears to have anticipated already last month by abandoning its plans to rescue Debenhams, a fashion retailer in long-term decline.