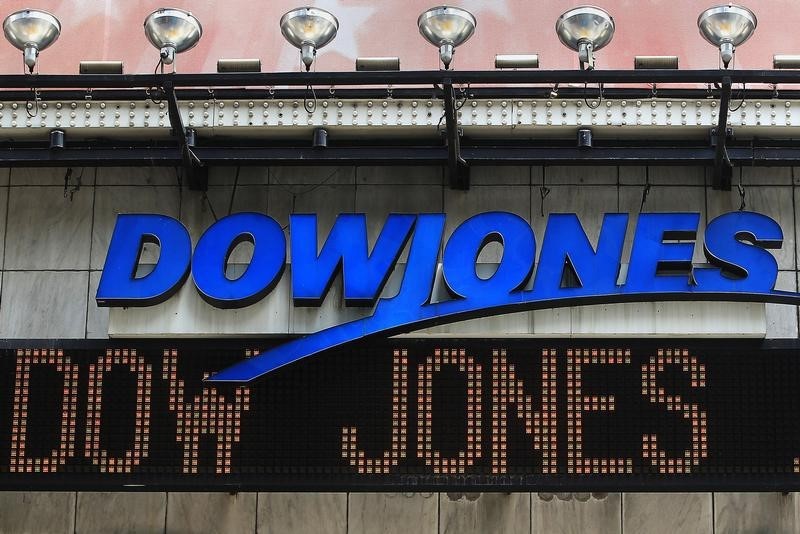 Investing.com – The Dow slumped Friday, snapping its three-week win streak as a tepid rebound in tech and a sea of red across energy and financials soured investor sentiment.

A fabulous February in which the major indexes hit record highs turned sour in the final days of the week. Cyclicals like energy and financials, the darlings of the February, despite a wobble on Friday ended the month sharply higher.

Energy was among the steepest decliners, paced by drops in Kinder Morgan (NYSE:KMI), TechnipFMC (NYSE:FTI) and EOG Resources (NYSE:EOG), with the latter down over 8% despite better-than-expected fourth-quarter results. Profit taking was also attributed to the energy’s steep losses into the month end as the sector has racked up 22% in February.

Financials, another pace setter for cyclicals in February with gains of 11% for the month, fell 2% as banks bore the brunt of the selling. JPMorgan Chase & Co (NYSE:JPM) and Goldman Sachs Group (NYSE:GS) fell more than 2%, while Wells Fargo & Company (NYSE:WFC) slumped 3%.

Tech, pared some its losses from a day earlier, to end the month in positive even as big tech stumbled and semis were abandoned for a 5% loss in February.

Apple (NASDAQ:AAPL), Microsoft (NASDAQ:MSFT) remained in the red, while Amazon.com (NASDAQ:AMZN), and Alphabet (NASDAQ:GOOGL) ended the day in the green following a rout a day earlier on rising U.S. yield jitters.

While another round of stimulus will likely boost prices, massive inflation is not necessarily a foregone conclusion. Against the backdrop of tepid recovery and elevated joblessness, some consumers are more likely to “save than spend any additional stimulus funds received [and] could more likely lead to stagnant, or at the very least, very minimal price pressures over the next 12-24 months,” Stifel added

The rise in yields has been exacerbated by a growing inflation jitters, with the 5-year forward breakeven rate, a measure of long-term inflation expectations, “rising from a low of 0.86% at the onset of the crisis to 1.94% as of Feb. 25,” Stifel said.

Elsewhere in tech, Salesforce.com (NYSE:CRM) fell 6% after its missed Q4 estimates and guided margins to be flat in fiscal 2022.