Home
Stocks
Coronavirus Update: Almost half U.S. population is partially vaccinated against COVID-19, but Asia remains a hot spot
Prev Article Next Article
This post was originally published on this site 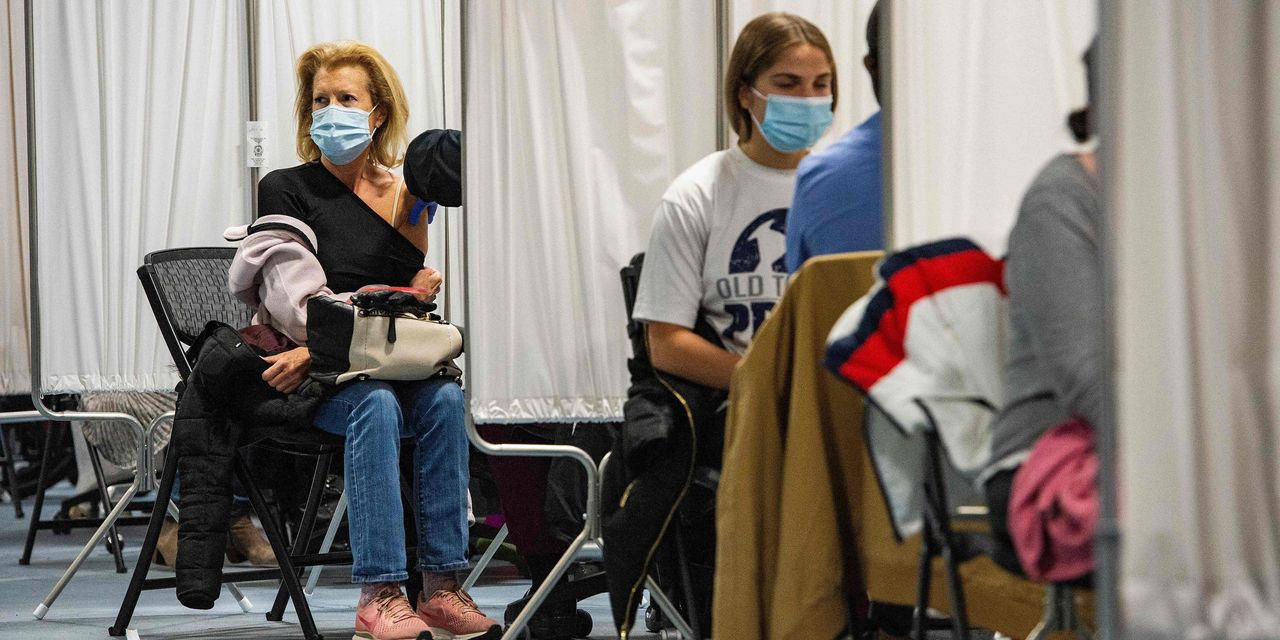 The U.S. COVID-19 vaccine drive is showing marked progress in reducing infections, hospitalizations and deaths with new cases down 32% in the last two weeks, according to a New York Times tracker, and almost 50% of Americans are partially vaccinated.

The Centers for Disease Control and Prevention’s vaccine tracker is showing that as of 6.00 a.m. ET Sunday, 157.5 million people of all ages had received at least one vaccine dose, equal to 47.4% of the population.

A full 123 million people are fully vaccinated, equal to 37.1% of the population, meaning they have received two shots of the two-dose vaccines developed by Pfizer Inc.
PFE,

and Moderna Inc.
MRNA,
,
or one shot of the Johnson & Johnson
JNJ,

vaccine has not been authorized for use in the U.S.

Among Americans 65 years-and -older, 39.8 million people are fully vaccinated, equal to 72.9% of that group. More than 46 million people in that age bracket have received a first jab, covering 84.8% of that population.

“They say that ‘April showers bring May flowers,’ and COVID statistics in the U.S. seem to follow that mantra,” said Chris Meekins, healthcare analyst at Raymond James. “High volumes of April shots have brought extremely hopeful May statistics– average daily identified case counts are below 31.5K, the lowest we have seen since June 23, 2020 (and remember daily averages in early January of this year were above 250K).”

The positive news of the expanded emergency use authorization for the vaccine developed by Pfizer Inc. and BioNTech SE to include 12-to 15-year-olds should have been the biggest news story of the past week, but it was overshadowed by the CDC’s relaxation of rules surrounding face masks, which continued to dominate headlines over the weekend.

Public health experts took to TV news shows to explain the sudden policy switch, which came just days after CDC head Dr. Rochelle Walensky had defended the agency’s strict mask guidance in front of a Senate committee where some Republicans on the panel described the CDC’s guidance as “unworkable,” as the Associated Press reported.

“I’m delivering the science as the science is delivered to the medical journals. And it evolved,” CDC Director Rochelle Walensky said on Fox News Sunday. “I deliver it as soon as I can when we have that information available.”

Under the new guidelines, fully vaccinated people — those who are two weeks past their final dose of a COVID-19 vaccine — can quit wearing masks outdoors in crowds and in most indoor settings and give up social distancing. Partially vaccinated or unvaccinated people should continue wearing masks, the agency said. The guidance also still calls for masks in crowded indoor settings including buses, airplanes, hospitals, prisons and homeless shelters.

“I would imagine within a period of just a couple of weeks, you’re going to start to see significant clarification of some of the actually understandable and reasonable questions that people are asking,” Dr. Anthony Fauci, head of the National Institute of Allergy and Infectious Diseases and President Joe Biden’s chief medical officer, said on Face the Nation.

Outside of the U.S., there are continued concerns about hot spots, which now include India, Brazil and Taiwan. Cases are falling in India’s capital New Delhi, and its financial center, Mumbai, after huge surges in recent weeks. On Monday, new cases fell below 300,000 for the first time in weeks, according to the AP, although official numbers are deemed to be undercounted given a shortage of tests and severe stress on healthcare systems in rural areas.

See: COVID-19 pandemic was a ‘preventable disaster,’ made worse by a lack of global coordination and dithering, independent panel finds

Combating the spread in the countryside, where health infrastructure is scarce and where most Indians live, will be the biggest challenge. “The transmission will be slower and lower, but it can still exact a big toll,” K. Srinath Reddy, president of the Public Health Foundation of India, told the AP.

Taiwan, which was widely praised for its success in containing the pandemic early in the outbreak, reported a record single-day rise of 203 cases on Sunday, CNN reported. The government imposed new restrictions for Taipei City and New Taipei City beginning Saturday. That meant shutdowns for leisure and entertainment venues: singing and dance venues, bars and clubs, hair salons, bowling alleys, gyms and fitness and recreational centers, along with internet cafes and other venues.

Taiwan counted 335 new cases on Monday, all but two of which were locally transmitted, according to the island’s Central Epidemic Command Center. The Taiwan Centers for Disease Control and Prevention said 155 out of 158 cases in the capital were linked to hostess teahouses.

• U.K. Prime Minister Boris Johnson called on the population to exercise “a heavy dose of caution” as restrictions ease further on Monday, with people allowed to be served indoors in bars and restaurants, attend movie theaters and hug family and friends, MarketWatch’s Pierre Briançon reported. The new step in the government’s “road map” to ease the economy out of lockdown also allows mixing indoors, lifts restrictions on outdoor meetings for groups of fewer than 30 people, and removes mandatory mask-wearing in schools. A top scientific adviser to the government, however, cautioned on Monday that the restrictions could return if the spread of a highly transmissible variant detected in India leads to another wave of the pandemic.

• Disneyland Paris will reopen on June 17 with enhanced health and safety measures, the theme park said on its website Monday. Disneyland Park, Walt Disney Studios Park, Disney’s Newport Bay Club Hotel and Disney Village will all be reopened that day, and Disney’s Hotel New York – The Art of Marvel will open on June 21.

• The head of UN agency Unicef urged rich countries to donate shots to the COVAX vaccine-sharing scheme to bridge the gap in supplies caused by India’s decision to curb vaccine exports, German broadcaster Deutsche Welle reported. Executive Director Henrietta Fore urged G-7 countries and the European Union to donate jabs to the COVAX program, which aims to ensure poorer countries get their share of vaccines. Richer countries can afford to donate more than 150 million vaccines to nations in need without hurting their own vaccines drive, she said.

Opinion: For just $25 billion, the U.S. could jump-start a project to quickly vaccinate the entire world against COVID

• A proposed “travel bubble” between Singapore and Hong Kong has been deferred again amid a surge of cases of COVID-19 in Singapore, the Guardian reported. The bubble was supposed to allow travelers between the two countries on May 26. It was already suspended in November of 2020, because of a surge in cases in Hong Kong at that time. The Singapore government said recent increase in “unlinked community cases” has resulted in the city state not being able to meet the criteria for this initiative.

• More than 80% of Japanese oppose hosting the virus-postponed Olympics this year, a new poll published Monday showed, with just under 10 weeks until the Tokyo Games, the Japan Times reported. The latest survey comes after Japan expanded a coronavirus state of emergency Friday as the nation battles a fourth wave of virus infections. The weekend survey by the Asahi Shimbun daily found 43% of respondents want the games canceled, and 40% want a further postponement. Those figures are up from 35% who backed cancellation in a survey by the paper a month ago, and 34% who wanted a further delay.

The global tally for the coronavirus-borne illness climbed above 163 million on Monday, according to data aggregated by Johns Hopkins University, while the death toll rose topped 3.38 million.

India is second worldwide with 24.9 million cases and third with 274,390 deaths, according to its official numbers.

China, where the virus was first discovered late in 2019, has had 102,748 confirmed cases and 4,846 deaths, according to its official numbers, which are widely held to be massively underreported.

The Empire State Manufacturing Index slipped to a reading of 24.3 in May from 26.3 in April, which was the highest in three-plus years, the New York Fed said Monday, MarketWatch’s Greg Robb reported.

Economists surveyed by The Wall Street Journal expected a reading of 24.8.

Both price indexes hit records in May. The prices paid index rose 8.8 points to 83.5 while prices received rose 2.2 points to 37.1. Expectations for business in the next six months slipped 3.2 points to 36.6.

The Empire State report gets market attention because it is seen as a leading indicator of national trends. The measure has steadily increased from a reading of 3.5 in January.

In April, the Institute of Supply Management’s manufacturing index, seen as the best gauge of factory activity across the country, slipped to 60.7 from a reading of 64.7. Economists think a growing U.S. economy will keep factories humming but perhaps not at the levels seen in April.

were lower Monday as technology shares again came under pressure.