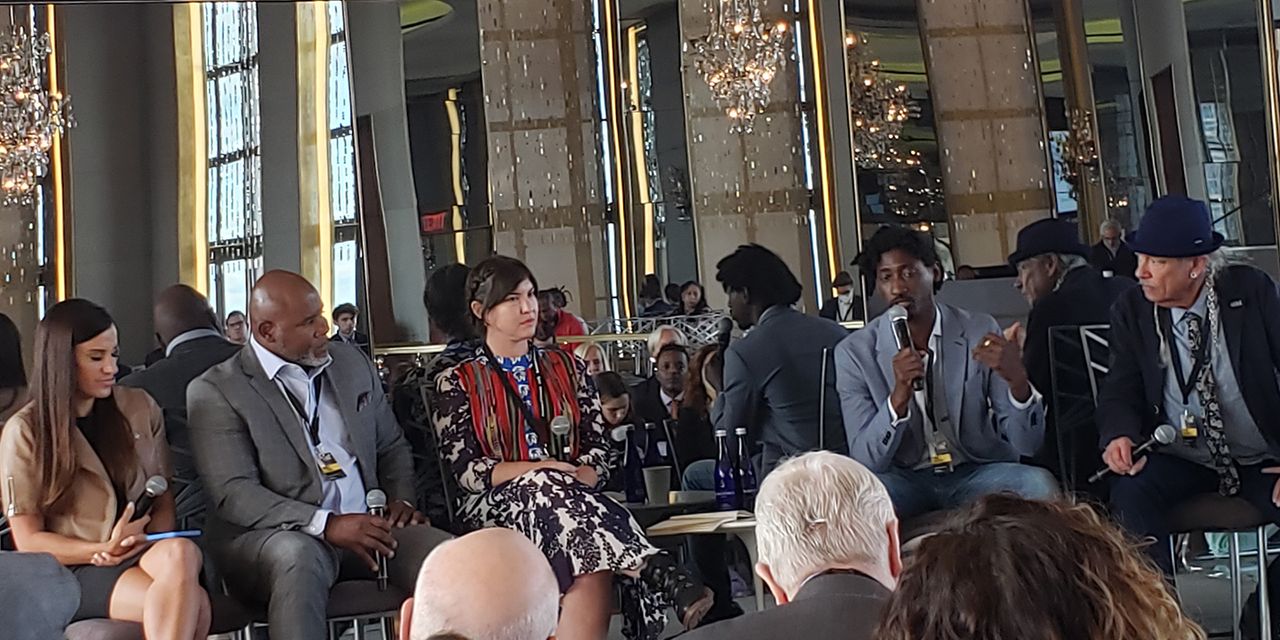 Concern about opportunities in legal cannabis for African Americans, indigenous people and people of color loomed large in an industry gathering focused on the emerging adult-use business in New York state this week.

About 300 advocates, financiers and prospective cannabis business founders gathered at the Business of Cannabis: New York event on Wednesday in New York City’s Rainbow Room to listen to discussions and network, as the Empire State joins others around the country in rolling out an adult-use cannabis program.

Bronx native and retired NFL player Ruben Lindo supported plans under the New York law to award cannabis business licenses to neighborhoods impacted by cannabis prohibition, but said people who have already been in the industry deserve more than a carved-out allocation of permits.

“‘It’s about giving the rightful ownership of an industry to people who bore the brunt of incarceration. We operated in the space at risk of life and liberty.’”

“It’s about giving the rightful ownership of an industry to people who bore the brunt of incarceration,” said Lindo, who is also CEO of Phoenix Nutraceutical Inc. and founder of Blak Mar Farms. “We operated in the space at risk of life and liberty.”

Lindo and others called on the state’s new Office of Cannabis Management to move forward quickly with an application process for social equity licenses.

With more than 19 million people, New York ranks as the fourth largest state by population in the U.S after California, Texas and Florida. It’s also home to the world’s biggest financial center, Wall Street.

Estimates on the potential size of the legal cannabis market in the state range from $3 billion to $6 billion, after the state legislature and former Gov. Andrew Cuomo legalized cannabis for people 21 and over in March.

Speakers said New York should avoid some of the pitfalls of legal cannabis in other states. In California, the illicit cannabis market has continued as a competitor to legal sales, partly because of high state taxes that make regulated pot less competitive. In Massachusetts, social justice licenses have been awarded but few applications have been approved thus far.

Mitch Baruchowitz of Merida Capital, which is taking cannabis company Leafly Holdings public through a SPAC deal, said New York could become the Eastern pole of the cannabis business, along with California in the West.

“There’s going to be a lot of entrepreneurs here,” he said. “The chance to talk to people and hear their own origin stories doesn’t feel like work.”

Cannabis may be the first product to be normalized before it was legalized because millions of people used it despite prohibition, he said.

“The challenge is, what are you going to do to new people who violate the law? What happens to people who don’t join the legal industry?” Baruchowitz said.

She called on investors and employers in the space to work with minority entrepreneurs, who have to this point been mostly left out of the state’s existing medical cannabis business.

“There are plenty of minorities that have resources and are experienced,” Littlejohn said. “When dealing with folks that are less funded, look for the meaningful opportunity, and include the people whose backs we’ve built this industry on.”

See now: If you want to get rich with marijuana stocks, you need to know the crucial difference between U.S. and Canadian companies

John Hudak of the Brookings Institute said municipalities that opt out of the cannabis businesses are similar to town folk in the movie Footloose who tried to ban dancing by forbidding it.

“These municipalities are afraid of people of color coming into communities and doing these scary things that the ‘War on Drugs’ propaganda has told us,” he said.

Kirstin Jordan of real estate firm Park Jordan LLC said residential property values around dispensaries have not suffered, which is “quite the opposite of what opt-out proponents have been predicting.”

State Sen. Liz Krueger, who authored New York’s Marijuana Regulation and Taxation Act (MRTA), said she was motivated to take on the issue more than seven years ago when she learned that about 50,000 young people per year were getting busted for low level marijuana offenses.

“They were not busting white kids in my district [but] everybody’s kids use marijuana at about the same rate and it’s insane — I wanted to fix the law,” Krueger said.

Roger Thomas, the African American CEO of Bronx-based cannabis startup Mello Tymes, said he found the event helpful to his plan to applying for a social justice cannabis business license.

“All we want is a chance,” said Thomas. “I think New York is going to give us a shot.”

New York Gov. Kathy Hochul has recently named members of the Office of Cannabis Management, which will move ahead with the licensing and regulatory activity to set up legal cannabis sales in New York by some time in 2023.

has gained 2.7% in the year to date, while the AdvisorShares Pure US Cannabis ETF
MSOS,