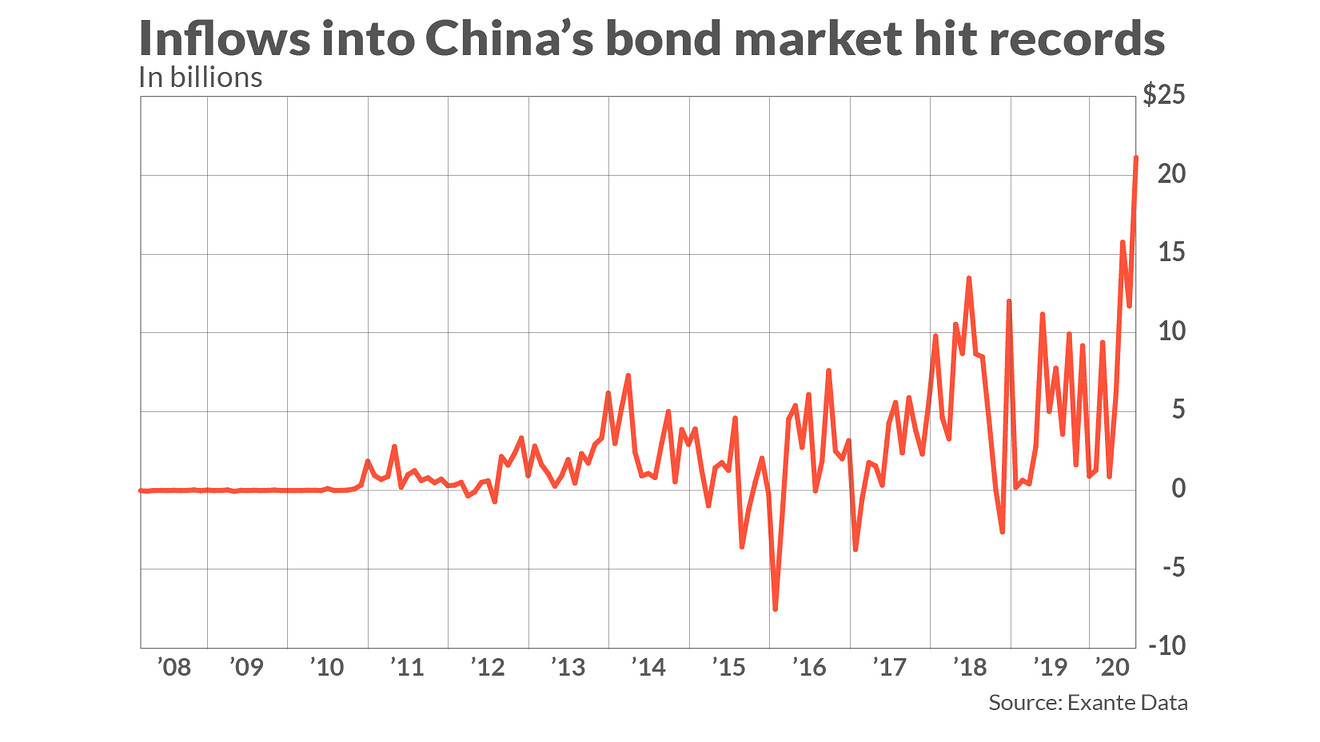 Global investors are overcoming their long aversion to China’s bond market as they take up a larger share of global benchmark bond indexes.

Debt from the world’s second largest economy historically has been overlooked by foreign investors as it’s closed capital markets prevented outside money managers from taking funds in and out of the country at will.

But Chinese bonds have been forcing their way slowly into the holdings of overseas funds based in New York or in London, thanks in large part to recent initiatives by Beijing to open up its financial markets to the outside world and its resulting inclusion into passive investing indexes – which carry significant sway over how, and where, portfolio managers allocate their cash.

“In years gone by, China might have been an interesting story, and it might have been something you were curious about. But it didn’t need to be assessed that seriously,” said Jonathan Orr, a portfolio manager at Goldman Sachs Asset Management, in a webinar on Tuesday.

But this view has waned among overseas investors who increasingly realize that the decision to avoid China’s bond market could leave them at risk of under-performing their competing indexes and their peers. Put another way, index-based investors “now have to take a view on China,” said Orr.

To be sure, the pressure to invest in Chinese debt has intensified among global bond buyers, in part, because of its strong performance relative to other debt markets.

The FTSE China government bond index has returned an annual 4.2% in the last 12 months as of July 31, compared with a 3.7% return for the J.P. Morgan’s flagship dollar-denominated emerging market bond index EMB, +0.04% over the same stretch.

Foreign inflows to Chinese bonds reached an all-time high in the second quarter of $33.5 billion. And in July, inflows reached $20 billion alone, its highest month on record, according to Exante Data, which tracks the movement of capital across the world.

Since 2019, Bloomberg and FTSE Russell have been slowly phasing in China’s inclusion into benchmark bond indexes. This reflects the favorable response to Beijing’s efforts to open up direct access to its bond markets for foreign investors.

For example, the Hong Kong-based Bond Connect, started in 2017, allowed investors who weren’t domiciled in mainland China to buy as many of the country’s bonds they wanted, without having to deal with the lengthy hassle of registering an account in the country and applying for a quota.

“Similar to what occurred with the equity indices, the bond index providers have recognized these reforms and moved to include China as a result,” said Nicholas Borst, director of China research at Seafarer Funds, in e-mailed comments.

Beyond passive inflows, China’s bond market also has become attractive in its own right.

In a yield-starved world, the country’s government bonds offer the richest income in comparison to other developed debt markets, said Alex Etra, a senior strategist at Exante Data.

Even as the Federal Reserve cut interest rates to rock-bottom this year, the People’s Bank of China only trimmed its benchmark loan prime rate to 3.85% from 4.15% at the start of 2020.

And the widely-watched 7-day rate to borrow funds in the bond repurchase market, a barometer of China’s monetary policy stance, has risen to above 2% after hovering around 1.5% in May.

Moreover, investors note that China’s government bonds march to the beat of their own drum, and have not followed the direction of government bonds from the U.S. and Europe, even though they shared similar safe haven characteristics with those markets, said Rob Waldner, head of macro research for Invesco fixed income.

Those qualities have drawn investors who prize diversification into Chinese debt as stocks and bonds across global sectors and countries move increasingly in sync, offering fewer places to shelter from a sudden market selloff.

Even with record inflows this year, there could be scope for additional funds to pour into China’s bond market as money managers still often remain underweight, according to Exante Data.

Orr cited estimates that another $250 billion of inflows could arrive into China’s bond market due to their recent inclusion into the three major indexes provided by JP Morgan, FTSE Russell and Bloomberg.