Home
Stocks
Deep Dive: Value stocks, which trade lowest to growth stocks since 2001, look like a smart play as the economy rebounds
Prev Article Next Article

Value stocks have started to perform better than growth stocks.

Some investors argue that marks a trend. Growth stocks, springing mainly from the technology industry, now have sky-high valuations after a robust rebound since the March lows. Value stocks are getting a second look as beleaguered industries rise out of the doldrums brought about by the COVID-19 recession.

Diane Jaffee, a senior portfolio manager at TCW Group, said in an interview that “valuations for value stocks, as represented by the Russell 1000 Value Index, are the most attractive they have been, relative to the Russell 1000 Growth Index, since 2001.”

She was talking about a comparison of forward price-to-earnings ratios for the indexes. Here’s how those ratios have moved over the past 20 years: 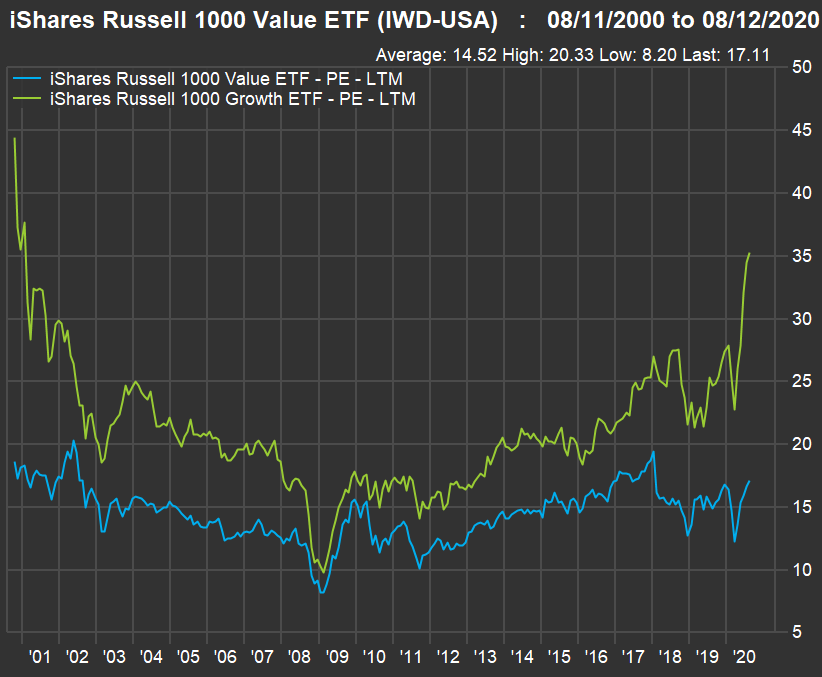 To illustrate Jaffee’s point, we can divide the value P/E by the growth P/E, producing 59%. By this measure, the value group indeed hasn’t traded this low, relative to the growth group, since 2001: 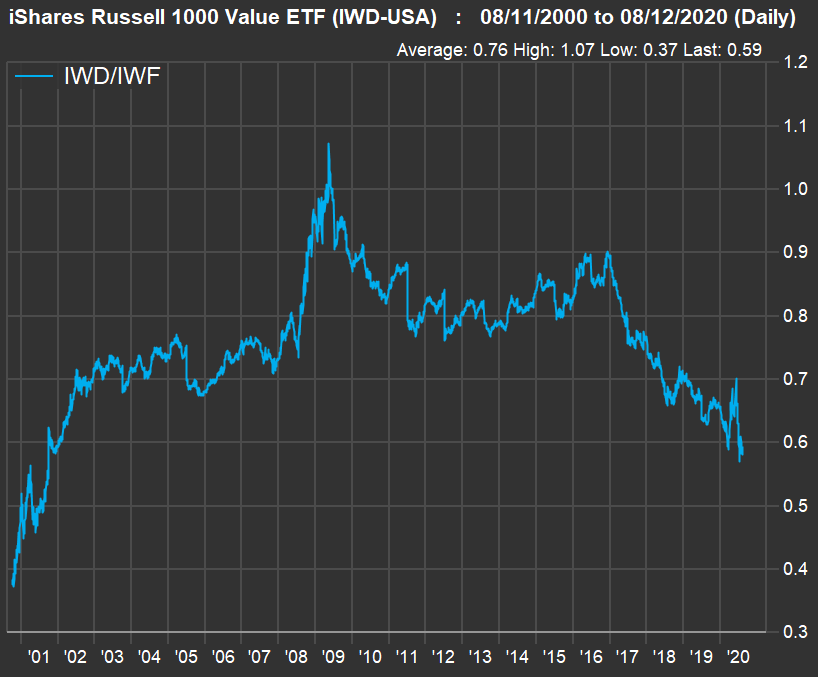 Jaffee pointed out what may be another silver lining for the value group: If we go out two years, the value group’s earnings for the 12-month period ended June 30, 2022, are expected to increase by 20.9%, from the previous 12-month period, compared with an 18.5% increase for the growth group, based on consensus estimates among analysts polled by FactSet.

“If we can get the health crisis resolved, investors will look forward to companies’ future earnings potential. That is a hallmark for value companies,” Jaffee said.

She highlighted concentration risk in the Russell 1000 Growth Index, with technology companies making up 40% of the market capitalization, by her estimate.

For the first two TCW funds listed above, Jaffee and her team cull the entire Russell 1000 Index by looking at price-to-book and P/E ratios, but they also review price-to-sales ratios, price-to-cash-flow ratios and dividend yields.

Jaffee said the Russell 1000 Value Index “has blinders on,” because different valuation measures have different levels of importance, depending on the industry. As examples, she said retail stocks are generally best valued by price-to-sales ratios, while managed-health-care companies are best valued on price-to-cash-flow ratios.

Jaffee said she and her team will then narrow the stock list further by focusing on “catalysts for cash flow,” such as cost-cutting, restructuring or improving operating margins, and also on R&D spending and the quality of management, as indicated by returns on equity, assets and invested capital.

The Large Value fund seeks to beat the performance of the Russell 1000 Value Index. The Dividend Appreciation Fund has income as its first objective, with capital growth secondary. The Mid Cap Value fund is designed to outperform the Russell Midcap Value Index RMCCV, -0.48%. 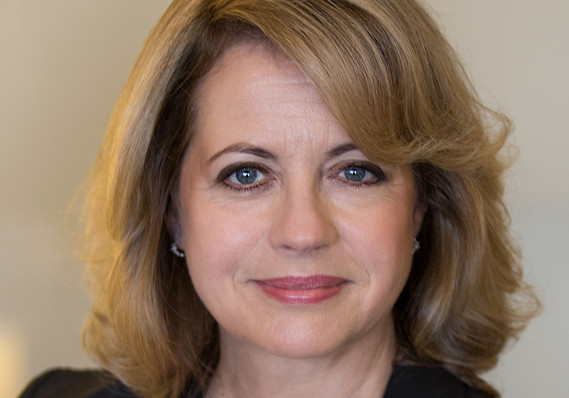 Jaffee provided three examples of value stocks held by the funds she manages:

“This is really the only pure play in Medicaid services, among managed-care companies,” Jaffee said. The Affordable Care Act was signed into law by President Obama in 2010. Since then, 37 states have expanded their Medicaid services, with federal subsidies.

“Molina was a family-run business,” Jaffe said. “They finally brought in management from outside,” when the company hired Joseph Zubretsky, a former CFO at Aetna, to become Molina’s CEO in October 2017. Jaffee said the company’s quality scores have improved, which is critical for the company to maintain and hopefully expand contracts to administer states’ Medicaid plans.

United Parcel Service Inc. UPS, +0.17% trades at a forward P/E of 21.3, which is relatively high. Then again, the company is thriving in the pandemic environment, with second-quarter revenue rising 13.4% from a year earlier. The stock’s dividend yield is 2.59%. UPS was the eighth-largest holding of the TCW Relative Value Dividend Appreciation Fund as of June 30.

It’s fortuitous to be in a seller’s market for services. During the company’s earnings call on July 30, UPS CEO Carol Tomé said “there’s an opportunity here on the pricing side to do what we need to do,” according to a transcript provided by FactSet.

Tomé took over as CEO on June 1, and Jaffee was particularly pleased, citing her work as CFO at Home Depot, and her long service on UPS’s board of directors. “They are increasing the fuel efficiency of their air fleet. They are making their ground game much more effective during this time when everybody is ordering everything,” Jaffee said.

You can click on the tickers for more about each company. You will need to scroll to the right to see all the data.

Here are the largest 10 holdings (out of 44) of the TCW Relative Value Dividend Appreciation Fund as of June 30:

It’s clear that value stocks as a group look like bargains now. But there’s no denying how poorly value stocks have fared against growth stocks in recent years. Here’s a 10-year chart comparing the performance of the Russell 1000 Value Index and the Growth Index: 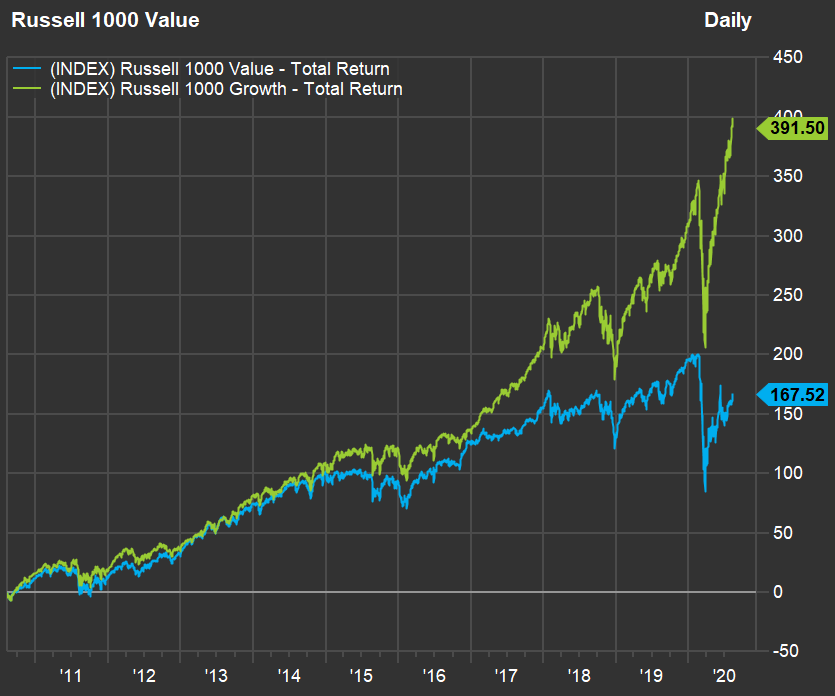 Here are total returns for the indexes for various long periods:

And here are average annual returns for the same periods:

The value index has performed better than the growth index only for the 20-year period, which includes the bursting of the dot-com bubble from September 2000 through October 2002.

When asked if the technological transformation of the economy means things are different this time and maybe growth strategies will continue to run ahead of value strategies for years, Jaffee said, “everything is cyclical.”