Home
Stocks
Mark Hulbert: Here’s a pandemic stock tip: Buy on the rumor of a COVID-19 vaccine, sell on the news
Prev Article Next Article

The stock market may fall when a COVID-19 vaccine formally receives FDA approval. I know I’m getting ahead of myself, since it’s not guaranteed that an effective vaccine will ever be produced. But with eight vaccines now in Phase III trials, and with Russia claiming bragging rights by being the first to register a vaccine, it’s not too early to begin thinking about how you should react when formal FDA approval for a vaccine is forthcoming.

To be sure, I am reminded of the old proverb that it is difficult to make predictions, especially about the future. I nevertheless began my speculation by searching through U.S. history to measure how the stock market in the past reacted to long-awaited good news. I found only four in the 20th Century that I deemed to be as fateful and significant as a COVID-19 vaccine could be: The end of World War I (Armistice Day), V-E and V-J days at the end of World War II, and Jonas Salk’s announcement of a successful polio vaccine.

Be my guest to suggest other events for my subset. But the four I picked were unquestionably momentous. Following the formal ends of both world wars, for example, millions across the Allied nations poured into the streets in celebration. Life magazine wrote that Americans, after hearing of Japan’s surrender, began celebrating “as if joy had been rationed and saved up for the three years, eight months and seven days since Sunday, Dec. 7, 1941 [the day of the attack on Pearl Harbor].”

I also focused on the announcement of the successful polio vaccine because it is arguably the closest analog to an eventual COVID-19 vaccine. Polio epidemics were common during the first half of the 20th Century.

However wonderful each of these events was, the Dow Jones Industrial Average DJIA, -0.28% fell on the news — as you can see from the chart below. 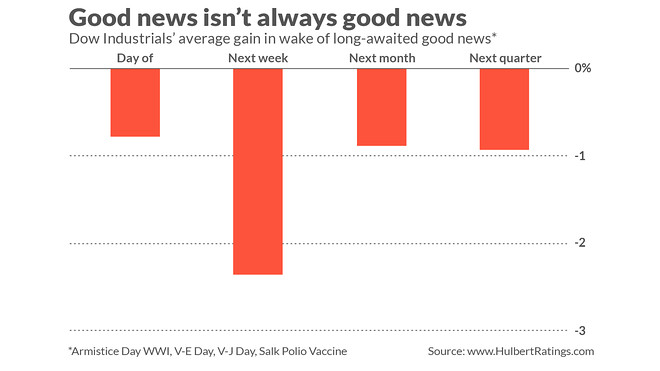 There are several explanations for this surprising result.

1. Discounting the future: The stock market discounts the future. Though each of these four events was unambiguously good news, none was entirely unexpected. We can easily overlook that from our decades-later perspective. In both world wars, for example, the military tide had been turning in the Allies’ favor for some time prior to the formal surrender declarations. And work on a polio vaccine had been progressing for many years.

As a result, the stock market prior to these four announcements had already reflected the good news.

This process of the market discounting the increasing probability will probably be even truer in the weeks leading up to an eventual FDA approval of a COVID-19 vaccine. The news media today obsessively reports every medical development and the results of each trial, and biotech companies are willing co-conspirators in this. FDA approval of a vaccine, when it comes, could be more of a non-event than we think.

One possible scenario is that the market rallies as it becomes increasingly clear that vaccine approval is close. When that approval finally arrives, retail investors could very well jump into the market with both feet. In contrast, institutional money managers and professional traders — the smarter money — will likely use that occasion to start selling.

This isn’t a new phenomenon. It is common enough, in fact, that Wall Street has an aphorism to describe it: “Buy on the rumor, sell on the news.”

2. Political considerations: Another reason an FDA approval announcement might not be met with a Wall Street rally is the widespread distrust of the process by which vaccines are being hurriedly developed. The FDA has already set a relatively low bar — just 50% effectiveness — and many already are voicing concern that whatever vaccine gets approved will not have received the same degree of rigorous safety testing that previous vaccines have received.

Regardless of whether these concerns have merit, they have economic consequences. The slow adoption of a marginally effective vaccine will not lead to a quick end to the pandemic or to a particularly strong and quick economic recovery. As one institutional money manager told me on background, FDA approval of a vaccine might “be the last bit of good news possible, and selling would be a correct decision.”

It’s worth mentioning in this regard the stock market’s reaction to Russian President Vladimir Putin’s announcement that Russia has registered the first COVID-19 vaccine: The S&P 500 SPX, -0.20% fell 0.8% on the day.

The bottom line? While we can only make an educated guess what the market will do if and when the FDA finally approves a COVID-19 vaccine, don’t be surprised if the market falls rather than rises.

More:CDC director warns America is in for the ‘worst fall…we’ve ever had’

Plus: Stocks could be melting up like they did in the Roaring ’20s, strategist says — we all know what happened next