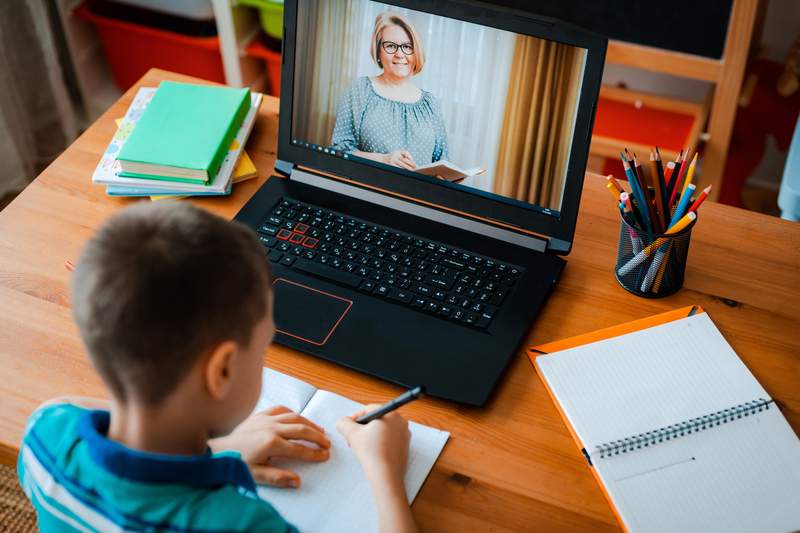 Investing.com — Try to find a reason to not buy Chegg (NYSE:CHGG). It’s a tough one.

The online textbook, tutoring and skill-accelerating company has delivered sales growth of 25% or more for seven-straight quarters. That number this past quarter was a whopping 63%, showing that Chegg is not just weathering the pandemic but flourishing. As further proof it bumped its guidance for 2020, citing U.S. schools that remain shuttered for the fall semester and skyrocketing international demand.

Even BMO Capital’s Jeff Silber, who has one of the two hold-equivalent ratings on the stock, is optimistic.

“There is a tremendous amount of growth ahead for them,” Silber said in a phone interview. “The valuation is the biggest issue. This stock just keeps going up.”

Silber is an outlier among his peers. Ten of the 12 analysts that cover the stock rate it a buy, according to analysts tracked by Investing.com. That’s despite the fact that Chegg has more than doubled in 2020, and its forward price-to-earnings ratio is currently at about 60. Compare that to Alphabet’s (NASDAQ:GOOGL) 35, Facebook’s (NASDAQ:FB) 33 and Apple’s (NASDAQ:AAPL) 34. The company said it doesn’t comment on valuation.

While Google, Apple and Facebook have pretty much conquered the world, Chegg still has a ways to go. Case in point, says Chief Business Officer John Fillmore, the total addressable market consists of millions of students worldwide.

“There is just so much opportunity in the core of what we do,” Fillmore said in a video interview on Aug. 12.

Last year, Chegg’s sales grew almost 30% in 2019 compared to 2018. And then Covid-19 struck, closing schools and forcing students from kindergarten through college to study from home. At the same time, international demand has exploded, from Turkey to South Korea.

“That’s been a runaway train for us in terms of continued growth, and we expect that we are really just scratching the surface,” Fillmore said.

Fillmore cites STEM (science, technology, engineering and math) materials that are already taught in English as an easy entry into countries where English is not the native language.

“That’s a huge tailwind for us in terms of international expansion,” Fillmore said. Chegg will focus on investing in the international market, including in content translated into local languages. Its foreign students are largely not studying at U.S. institutions.

“Only 1% of our international customers actually went to school in the US. So these are all new customers to us,” said Chief Executive Officer Dan Rosensweig on the second quarter earnings call earlier this month. “So I know there has been some speculation as to whether or not these were international customers that went home and then subscribe at home, but we obviously monitor those things and frankly we are picking up brand-new customers around the world and over 99% of them are brand new to Chegg.”

To be sure, Chegg is not alone in its mission to serve students worldwide. The Santa Clara, California-based company competes against Course Hero, Varsity Tutors, Quizlet and Bartleby, not to mention burgeoning locals that may have an advantage being already versed in their native language and culture.

Fillmore shrugged off the competition, saying that no other company offers the full suite of services that Chegg does.

“One reason we’ve seen extraordinary growth is that we are unique,” Fillmore said.

One of their main challenges isn’t unique though. Like Netflix (NASDAQ:NFLX) and others, Chegg has an admitted challenge when it comes to the sharing of passwords among students. While it’s improved now that most users have dispersed and returned home, it remains a problem.

Fillmore admitted that the onus is on the company to continue to work on that issue, and Rosensweig noted that it’s a priority for the company.

“We are implementing systems to address account sharing and investing in device management control,” Rosensweig said on the earnings call.

The other big area of focus for Chegg is in skills-accelerating via their 2019 purchase of Thinkful, which provides courses in data science, software engineering and digital marketing. Students aren’t going to school just for an education, Fillmore said. About 80% of them go to college because they want a job, but the traditional college journey isn’t for everyone. Fillmore argues that many end up in jobs that didn’t need a college degree to begin, and, of course, graduate swimming in debt.

Add to that tech giants like Alphabet saying potential employees don’t need a four-year degree, and more and more people will pass on a costly and lengthy four-year college education in favor of an efficient course to beef up on necessary skills and get to work.

“The beautiful thing is unlike the college you may or may not change their curriculum, we can always have the most relevant curriculum for the most in-demand jobs and that’s what Thinkful is all about,” Rosensweig said. “So we’re super excited about the future of Thinkful right now.”