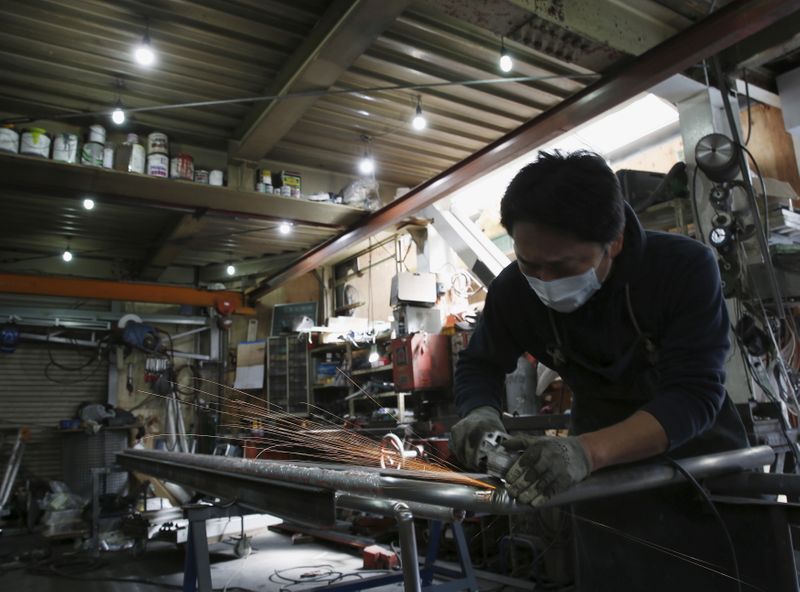 TOKYO (Reuters) – Japanese manufacturers of metals, including steel and aluminium, saw their output plunge in the April-June quarter as automakers temporarily shut factories to curb the spread of the COVID-19 virus and to match slumping demand.

They expect a gradual pick-up in metals used in automobiles and other industries toward next March, but not enough to bring demand back to pre-pandemic levels, suggesting a smaller annual import of raw materials such as iron ore, coking coal and primary aluminium ingots.

“Demand for steel used in automobiles will recover from the July-September quarter as automakers are stepping up output, but it won’t be back to 100% by March,” Junichi Akagi, general manager of JFE Steel, Japan’s second-biggest steelmaker, said earlier this month.

Crude steel output at the world’s No.3 steel producer plunged 31% in the April-June quarter versus a year earlier to 18 million tonnes, according to the Japan Iron and Steed Federation, with orders of ordinal steel from automakers slumping 58% to 920,000 tonnes, the lowest quarterly level since 1971.

The nation’s production of aluminium rolled products slid 15% in the quarter, the Japan Aluminium Association said.

With the auto segment accounting for about 20% of steelmakers’ local demand, and 15-18% for suppliers of rolled aluminium products, a recovery in car production is a key for the suppliers’ recuperation from devastated earnings.

“Our steel output in the October-March second half will rise 20% from the April-September half as industry activities, centred in automobiles, are expected to rebound,” JFE Holdings (T:5411) President Koji Kakigi said last week.

JFE Steel may restart one of the two blast furnaces which were temporarily suspended to cope with the COVID-19 crisis, in October, Kakigi said.

Nippon Steel (T:5401) President Eiji Hashimoto, also the head of the steel federation, has warned Japan’s crude steel output may fall below 80 million tonnes this financial year, the lowest since 1968.

UACJ Corp (T:5741), Japan’s biggest aluminium roller, also forecast a recovery in demand from automakers after June, but cited “uncertainty” over the outlook.

If a recent resurgence in Japanese coronavirus infections prompts restrictions in industry activities, a further reduction in imports of these materials is likely, industry experts say.