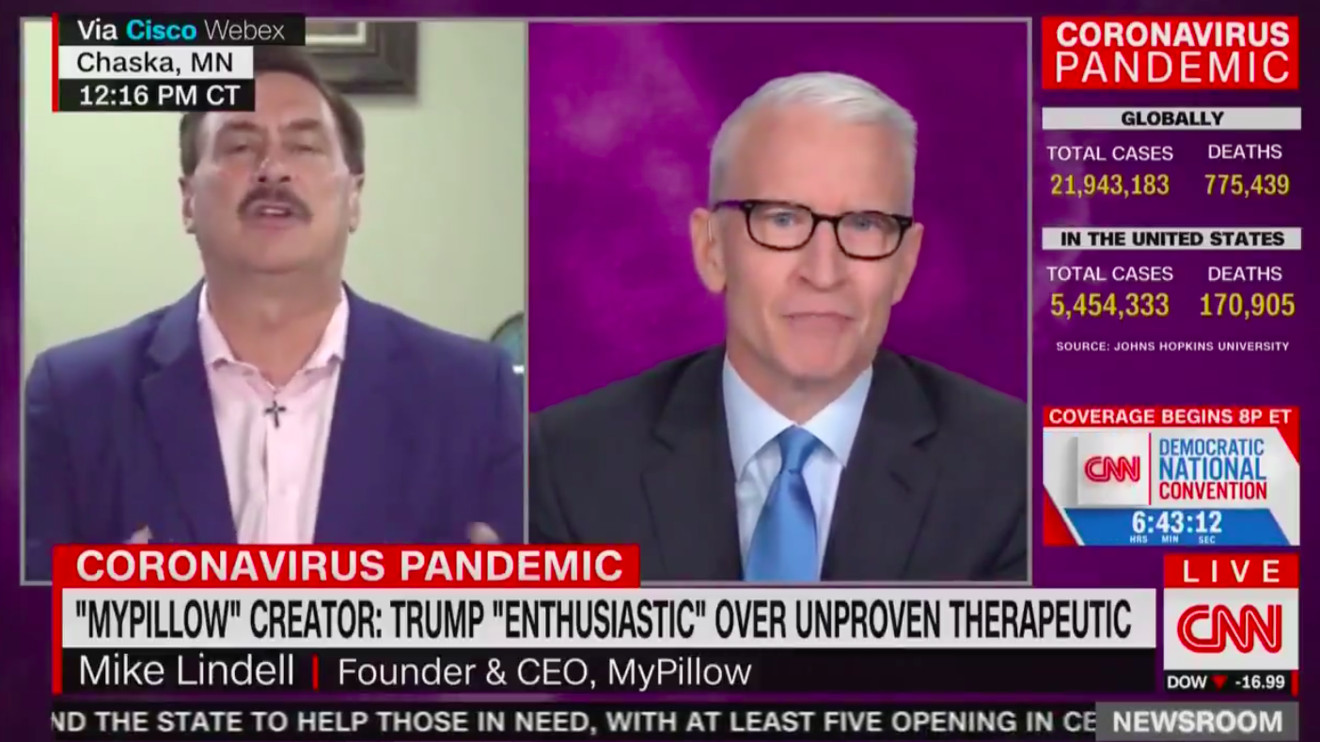 This interview certainly won’t put you to sleep.

CNN’s Anderson Cooper and MyPillow CEO Mike Lindell got into a heated argument on the air Tuesday afternoon over oleandrin, the extract from the highly toxic oleander plant that the pillow salesman joined Housing and Urban Development Secretary Ben Carson in pitching to President Trump in July as a potential coronavirus cure.

Reports of this oleandrin push in the White House have raised eyebrows this week, as there is no evidence that oleandrin works to treat COVID-19 in humans. While oleandrin has been developed to treat cancer, it is still considered an “investigational new drug” that is not an approved cancer treatment in the U.S. What’s more, both oleandrin and the plant it is derived from are toxic to humans and animals; eating one oleander leaf can kill an adult.

In fact, emergency medical physician Jake Deutsch, who appeared on Cooper’s CNN show after Lindell was finished, said that it’s “more likely someone would die from taking oleander than from COVID.”

While a July study out of Texas showed that, in test tubes, oleandrin could inhibit the coronavirus in monkey kidney cells, this study has not been peer-reviewed or published yet. And there are no published reports that oleandrin has been tested to treat COVID-19 in animal or human hosts. In fact, the United States Army Medical Research Institute of Infectious Diseases (USAMRIID) also conducted some preliminary testing of oleandrin against SARS-CoV-2 (the novel coronavirus causing the disease COVID-19) recently. It stopped because the results were “inconclusive.”

Yet Lindell argued on Tuesday that oleandrin is “the miracle of all time,” and that “the tests are out there.” Indeed, he said he was contacted about it as far back as Easter Sunday, when he recalled that he “told the whole country to pray for the end to this pandemic.”

But the more Cooper grilled Lindell over any proof that oleandrin is effective against COVID-19, and that it has been tested for this purpose in humans in rigorous peer-reviewed, clinical trials, the more flustered Lindell became. “There has been studies the FDA has not published yet,” Liddell insisted. He repeated that one involved “a thousand people,” but he could offer no details about when or where it was done, or why the public hasn’t seen this report yet.

Watch some of the back-and-forth here:

Cooper summed up their exchange toward the end of the interview: “You have no medical background. You have no science background at all. You have a financial stake in this company. … You can’t give any details about an alleged study of a thousand people that you allegedly have read, yet you remember nothing about it. This has not been tested anywhere outside one lab in a test tube … yet you say this is the cure of COVID.”

“ ‘How are you different than a snake oil salesman? … This is shameful, what you’re doing.’ ”

“If there is a published, peer-reviewed study that shows efficacy for this treatment, believe me, I want more than anything for there to be a cure for this. We are all sick of this. We are all tired of this,” Cooper added.

When Lindell then tried making the case that they were on the same page here, the CNN host shot him down. “But we’re not in this together, because you’re making money off this,” said Cooper.

Cooper questioned Lindell’s integrity, noting he has had to pay “massive settlements” over misleading health claims made in his late-night infomercials. MyPillow agreed to pay almost $1 million in civil penalties in California in 2016, for example.

Lindell countered that he settled because he was being attacked by “frivolous lawsuits” after supporting President Trump, whom he called “the greatest president this country has ever seen.”

“I hope he’s watching so you get another meeting,” Cooper responded.

Viewers ate the exchange up, with many sharing some of the most pointed barbs on Twitter TWTR, +0.09% on Tuesday afternoon, leading both men’s names to appear among the trending ranks:

Lindell accused the media of “trying to take away this amazing cure” and told Cooper that “you’ll probably want to take it yourself” if the FDA approves it.

“I guarantee you I will not,” Cooper replied.