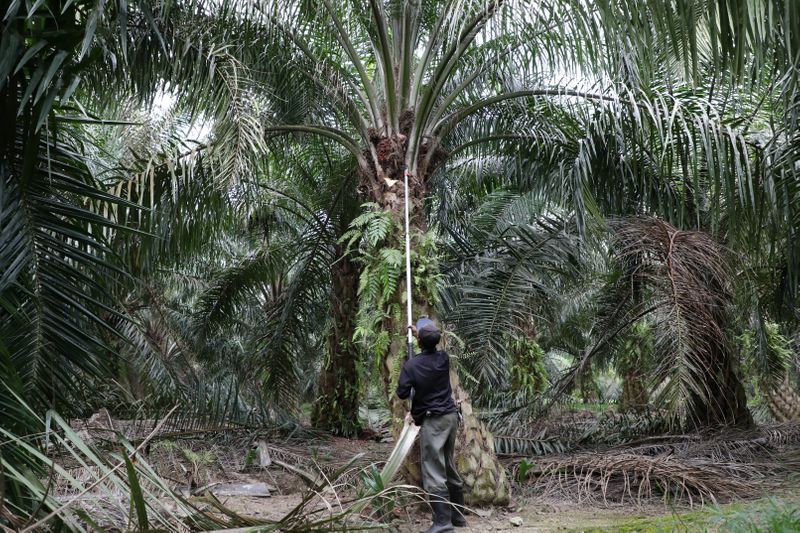 KUALA LUMPUR (Reuters) – Malaysia’s palm oil producers are embarking on a rare recruitment drive to hire locals and accelerating industry mechanisation as they grapple with a severe shortage of foreign labour due to the coronavirus pandemic.

As the September-November peak production season approaches, companies are erecting banners near plantations and posting online job advertisements boasting free housing, free water and other perks of estate life in a bid to lure workers to do everything from driving tractors to harvesting.

Already, travel and movement restrictions have left the world’s second-largest palm oil producer grappling with a shortage of 37,000 workers, nearly 10% of the total workforce. The Malaysian Palm Oil Association (MPOA) believes this could blow out to 70,000 workers once borders reopen.

The industry fears the labour crunch will hurt palm oil production this year by delaying the harvest of perishable fruit, giving an edge to bigger rival Indonesia which has no such labour problems.

Malaysia’s average cost of production is already slightly higher at about $406-$480 a tonne, according to analysts, compared with Indonesia at $400-$450 a tonne.

Countries like Indonesia and Bangladesh provide nearly 85% of plantation workers for palm companies such as Sime Darby, IOI Corp and United Plantations.

While employing more Malaysians could save on recruitment fees and levies needed to fly in foreign workers, planters worry that local workers, who typically shun plantation work as dirty and dangerous, won’t commit to the industry or take on the most difficult jobs.

“It’s possible that recruiting more locals could bring down the cost of production, but provided these locals are also as productive as them (migrant workers),” said MPOA chief executive Nageeb Wahab. “That is a big question mark.”

Despite a rising unemployment rate, Imran said most of the interest at the recruitment day was for general duties, such as driver or mechanic, rather than the taxing and crucial task of harvesting.

With more foreign workers leaving, some severely understaffed smaller firms, which are less able to retain migrant labour, have resorted to poaching workers from competitors.

“It is bad, but I need to do this to survive,” said an official of a mid-sized estate in Sarawak who declined to be named.

The labour shortfall is adding urgency to long-standing plans for industry mechanisation.

It’s also turning to remote sensing and artificial intelligence to drive “precision farming”, making the most efficient use of farm inputs and field workers.

IOI said it has a “revitalised mechanisation plan”, and aims to mechanise fertilising and pesticide spraying as well as automating mill operations, while FGV Holdings plans to mechanise an extra 30,000 hectares over the next three years.

Malaysia on average allots one worker for every 8 hectares, but the MPOA wants a “quantum leap” in technology that would double the land area for each worker to 16 hectares. This would reduce reliance on labour, which accounts for around 30% of production costs.

“Imagine inventing a drone that can fly under the canopy of palm trees, with a scanner to detect ripe fruit bunches and a laser attached to cut the bunch,” said M.R. Chandran, a veteran industry official turned consultant.

“By totally modernising plantations with drones, artificial intelligence and robotics, we can also make plantation work more attractive for locals.”