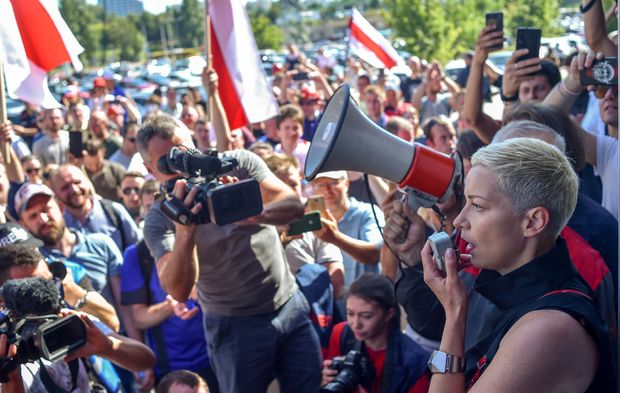 Opposition leader Maria Kolesnikova speaks during a rally in Minsk on Monday.

MINSK, Belarus (Project Syndicate)—Aug. 14 marked a symbolic breakthrough in Belarus, once a part of the Soviet Union. Thousands of people gathered at Independence Square in Minsk in front of the National Assembly, including many women and workers—the coalition that saved the opposition in its most difficult moment, when it looked like police violence might succeed in repressing the protest movement.

For the first time, the authorities didn’t intervene, even though this is an area where protests in the wake of the rigged presidential election on Aug. 9 had been strictly prohibited.

Also read: Here’s why the Belarus protests and the re-election of ‘Europe’s last dictator’ matter

The 50 army soldiers who were present symbolically set down their shields. Women adorned them with flowers and embraced the soldiers, further discrediting President Alexander Lukashenko’s regime and providing a moving example for other members of the security services to witness.

The next breakthrough came the following day. The staff of Belarusian state television (primarily technical staff, but also some presenters), an entity that had previously been utterly subservient to the government, began to show solidarity with the protesters.

The television staff gathered in front of their headquarters. When protesters joined them in the evening, Natalya Kochanova, chairwoman of the Parliament’s upper chamber, showed up, but was unable to mollify the crowd. On Sunday, state television reported on the protests for the first time. Soon after, Belarusian diplomats began to break with Lukashenko, beginning with the ambassador to Slovakia, followed by the chargé d’affaires in Switzerland.

More from Sławomir Sierakowski: The Struggle for Belarus

Lukashenko tried to break the opposition’s momentum by holding a rally at Independence Square, with some 5,000-7,000 bused-in supporters. Exactly one week after he had stolen the election, Lukashenko sought a show of strength and to restore the red-green flag as his country’s national symbol. One day earlier, the white-red-white flag favored by the opposition had flown above Grodno’s city hall.

The crowd comprised soldiers and officials, but also workers, musicians, children, and guests from Ukraine and Georgia—so-called ordinary people, about 10 of whom spoke. Their messages were inconsistent, which seemed to reflect the authorities’ own uncertainty about what to do.

Those not personally dependent on Lukashenko and not directly involved in the crimes of his dictatorship talked about peace, often with tears in their eyes. An artist from Ukraine, recalling the Orange and Maidan revolutions, said: “We broke as a nation; we split in two.”

The speakers were met with varying receptions from the crowd. One overly conciliatory soldier was booed. But there were frequent acknowledgments that not everything was as it should be in Belarus and that not everyone was satisfied with the current situation. Throughout the rally, there were two clearly competing messages—a dichotomy that was evident when Lukashenko spoke.

The most frequently repeated words were mir and mirnyi (peace and peaceful), but the most important slogan was, “Belarus’ eto my!” (“We are Belarus!”). On one hand, the authorities clearly feared civil war and responsibility for starting it; on the other hand, the sympathies of ordinary people at the rally were with the opposition: they want a normal life and are afraid of violence. The closer any of the speakers was to power, the more belligerent their tone.

A muscular lieutenant colonel from the OMON riot police spoke before Lukashenko, declaring in a threatening tone that he loved his country and would never surrender it. Lukashenko then announced that he was stationing troops at the border with Poland, near Brest, and stated that even after his death, he would not give up Belarus. His lack of self-confidence was clear; this was no composed leader in control of the situation.

The people listening to him were mostly from outside of Minsk. At first, they hovered around the rows of buses that had brought them, clearly feeling lost in the city. Finally, they were taken to the square, which had been blocked off in the morning and surrounded by groups of undercover policemen.

The pro-regime demonstrators were easily distinguishable from the opposition protesters, and there was a sense of tension on the square, reflecting the demonstrators fear for the future and their need to hear their leader, who would restore their confidence. When I started speaking Polish while reporting on the events for TVN24, I noticed hostile glances, and some people started shouting at me.

The opposition’s response to Lukashenko’s rally, like so much else in this civic uprising, had been prepared in advance. Demonstrators convened at Victory Square, in front of the Minsk Hero City Obelisk, where the election day demonstrations began a week earlier.

Some 200,000-500,000 people turned out—the largest gathering in the history of the country, with columns of demonstrators stretching for miles. It was a great show of strength. Lukashenko had intended to shore up his position, but his crowd was numerically overwhelmed.

A week ago, the security services were able to drive the opposition out of the square with beatings, killing one protester. For this massive rally, the riot police, unable to do anything, didn’t even bother to show up.

The opposition was not afraid of a potential confrontation.

Even though several thousand Lukashenko supporters appeared, many of them undercover policemen, anyone leaving the pro-regime rally melted into a sea of white-red-white flags, which took over the entire expanse of Independence Avenue. In front of the headquarters of the KGB, which holds many detainees, protesters shouted, “Let them out!” At the end of the day, the once menacing dictator and his thugs were completely drowned out.

Sławomir Sierakowski, founder of the Krytyka Polityczna movement, is director of the Institute for Advanced Study in Warsaw and senior fellow at the German Council on Foreign Relations.

This article was published with permission of Project Syndicate—The Cracks in Belarus’s Regime Are Multiplying.