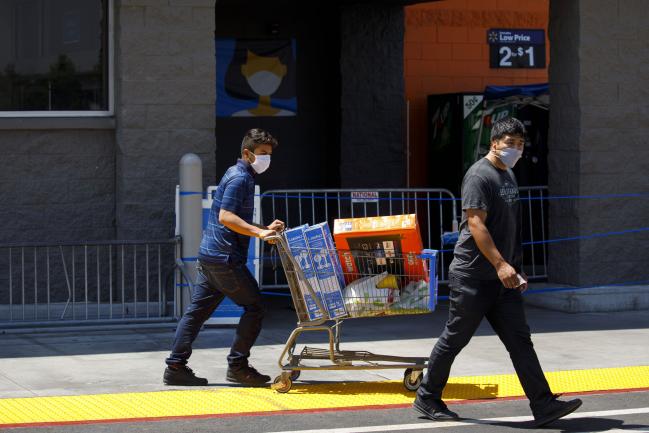 The retailer’s comparable sales growth slowed last month as the impact of the government relief program waned, according to Chief Financial Officer Brett Biggs. A consumer survey from analysts at Stifel found that three out of four Americans have already spent a chunk of their stimulus checks.

“Comps were not as strong in July as stimulus dollars likely had been spent by then,” Biggs said Tuesday in an interview after the company reported second-quarter earnings. “Consumers are still spending money but not at pace they were in the middle of the quarter.”

Walmart, like other essential retailers who remained opened during the pandemic, has enjoyed a tailwind from stimulus checks that Americans started to receive in mid-April, which they spent on everything from bicycles to board games while stuck at home. But as Congress continues to debate the size and timing of further stimulus spending after the initial round ended last month, Walmart’s lower-income customers could get squeezed.

“The outsized gains experienced over the last few months may be starting to ebb,“ RBC Capital Markets analyst Scot Ciccarelli said in an note.

The slowing demand damped enthusiasm for an otherwise strong quarter, as comparable-store sales, a key indicator of retail performance, beat analysts’ estimates with an increase of 9.3% for U.S. Walmart stores. Revenue of $137.7 billion in the quarter ended July 31 also topped expectations.

The shares pared earlier gains and fell about 1% as of 9:20 a.m. in premarket trading in New York. Walmart gained 14% this year through Monday.

The retailer’s U.S. e-commerce sales rose 97% in the quarter, compared with the average analyst estimate of nearly 60%. The coronavirus has catalyzed online purchases, and Walmart has been a primary beneficiary thanks to its revamped website and a new partnership with Shopify (NYSE:SHOP) Inc. to bring more merchants into its fold. The retailer also recently merged its two main shopping apps in order to generate more non-food sales online.

“We started where we left off last quarter — general merchandise continued to be really strong through the quarter,” Biggs said.

The world’s largest retailer is parlaying its low prices, ubiquitous store network and improved website to capture a big share of pandemic-fueled spending on food and other household essentials. It’s also looking to take a page from rival Amazon.com Inc (NASDAQ:AMZN).’s playbook by starting a subscription service later this year.

Walmart is planning to introduce the program, dubbed Walmart+, to help it hold onto the millions of new shoppers it has picked up during the pandemic. Chief Executive Officer Doug McMillon said on a conference call Tuesday that the company is nearing the launch and will share more information “when appropriate.”

Walmart said gross profit margins in the quarter widened by 63 basis points as it sold more non-food items that deliver better profits, with demand for those items fueled by government stimulus checks. But its operating expenses as a percentage of sales — a key metric watched by investors — increased in part due to $1.5 billion in Covid-related costs.

The results include a $380 million charge for business restructuring, including layoffs. Walmart has been reorganizing its roughly 4,750 U.S. stores by reducing its corporate and field staff and consolidating divisions, Bloomberg News reported in July.

The retailer, which withdrew guidance in May, didn’t offer a fresh outlook on Tuesday due to uncertainty about the virus and the timing and scale of additional government stimulus spending.

Republican and Democratic negotiators remain at an impasse over renewed coronavirus relief. Federal Reserve officials and private economists have both emphasized that a sharp drop-off in government spending would hurt any U.S. recovery.

President Donald Trump on Aug. 8 signed orders that extend supplementary unemployment insurance payments and offered employers a deferral on collection of payroll taxes. Still, estimates of their impact are just a fraction of the $1 trillion stimulus package proposed by Republicans, let alone the $3.4 trillion relief proposed by Democrats.