Home
Stocks
: Uber’s and Lyft’s alternatives if they shut down their ride-hailing businesses
Prev Article Next Article 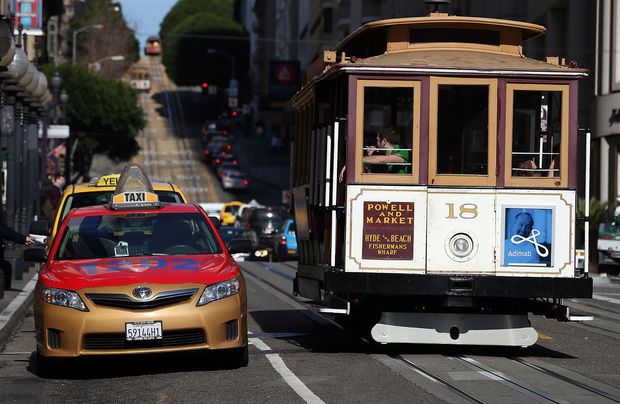 Taxis next to a cable car in San Francisco in 2014. If Uber and Lyft shut down in California this week, cabs are one on-demand alternative.

As Uber and Lyft prepare to shut down ride-hailing in California this week, alternate modes of on-demand transportation say they’re ready to pick up the slack — although at this point in the pandemic, demand for rides is down significantly in the state.

Still, people have been using the apps for rides to work, medical appointments, grocery shopping and other necessary activities as California remains under shelter-in-place orders.

So an Uber and Lyft shutdown “could be a big shot in the arm for taxis,” said Mark Gruberg, a taxi driver and a board member of the San Francisco Taxi Workers Alliance, in an interview.

Unless they win their appeals in state court, Uber Technologies Inc. UBER, +2.03% and Lyft Inc. LYFT, +2.83% must heed by Thursday a San Francisco Superior Court judge’s order to obey a California law and classify their drivers as employees instead of independent contractors. Both companies are fighting the law and say the transition would be time-consuming and cumbersome. They started warning California riders on the app Tuesday that they will likely suspend their ride-hailing service if forced to comply.

San Francisco cab company Flywheel uses the Flywheel app, which offers an experience similar to that of summoning an Uber or Lyft on a user’s mobile phone.

“Our drivers are lean, mean, hungry and waiting to pick up business,” said Hansu Kim, owner of the 300-vehicle cab company, in an interview. Kim added that “Flywheel will absolutely be prepared to embrace Uber and Lyft drivers to drive a taxi cab in a regulated and legal way.”

Gruberg, who said he has stopped driving because he doesn’t want to risk his health during the COVID-19 crisis, pointed out that drivers are faced with “very hard choices” right now. But if the demand for rides climbs, he thinks some cab drivers will come back.

In San Francisco, some riders say they may switch to taxis, but others haven’t forgotten their negative experiences with cab drivers who refused to go to certain neighborhoods.

“I’d imagine downtown is still pretty dead so maybe (cab drivers would) be more willing to hit the Sunset and Richmond these days,” said Kevin Murphy, who has been taking Lyft to and from work because city buses are running fewer routes. “Cab drivers generally hate driving out here because I guess it’s more difficult getting another fare. Most, but not all, were pretty aggressive and rude about it back before Lyft and Uber. Half the time they’d kick me out once I said where I was going.”

Public transportation is an option but isn’t as reliable or quick as it used to be because, for example, San Francisco’s Muni has fewer routes available due to a drop in demand. As of this week, demand for public transportation in the Bay Area was down 84% compared to last year, according to Transit, which bases its estimates on the number of times its app is opened in an area it serves.

Another alternative for those who don’t own a vehicle is car sharing, or on-demand car-rental services that offer more flexibility than traditional car rentals. The vehicles can be rented by the hour, by the day or longer, and usually don’t have to be returned to the same place they were picked up because the companies that own the cars have special arrangements with municipalities, which determine where the cars can be dropped off.

One such service is Gig Car, which is owned by AAA Northern California. It serves the Bay Area and Sacramento, and just launched in Seattle last month. It has more than 65,000 members, according to spokesman Sergio Avila. Like other modes of transportation, he said Gig Car has seen less demand for its vehicles (mostly Priuses) during shelter-in-place orders, but that the service is starting to see a rebound. A similar service, Zipcar Inc., a subsidiary of Avis Budget Group Inc. CAR, +2.56%, says it has nearly 1,000 vehicles up and down California.

See: Even if Uber rides come to a stop in California, Uber Eats still has a green light

One more alternative doesn’t involve cars — and comes from Lyft itself: A spokeswoman says a shutdown will not affect the company’s scooter and bike rentals.