Home
Stocks
CityWatch: Is it the last dance? The murky future of NYC’s nightlife business
Prev Article Next Article

Nearly four months after COVID-19 shut down House of Yes — a nightclub in Bushwick, Brooklyn, known for its psychedelic circus vibe and fabulous dance parties — the business got some of its groove back on July 2.

“Open for outdoor drinks and food in a seated, limited capacity, socially distanced environment,” the 10-year-old nightlife business noted early last month on its website. “You can also order to-go cocktails from the bar.”

While it’s a far cry from a freaky dance party, the pandemic pivot helps pay the rent. “It’s a Band-Aid,” said co-founder and creative director Kae Burke, who ballparked the monthly rent at around $15,000.

Like other New York City club operators, Burke is holding on for dear life. She is also thinking creatively about alternative uses for the space, and banking on her landlord — it’s a family-owned company, she said — being willing to negotiate.

“We could maybe last a year at this rate,” she said. “No, actually less than that — six months.”

Andrew Rigie, executive director of the NYC Hospitality Alliance, which serves establishments across the city, described the foreseeable future of nightlife as “very dim. Federal support is needed so these businesses can hang on, so when they’re able to reopen safely, they can do that. Without that support most won’t survive.”

Nightclub and live music venue Elsewhere in Williamsburg, Brooklyn, also is making use of outdoor dining.

“We need to figure out how to clear a path to survive beyond summer,” said owner and operator Dhruv Chopra. “I don’t see reopening until a vaccine is well in place. Will current players be in play in 12 or even six months? That depends on federal support. Also key is being able to work with landlords.”

Chopra is a member of the 5-month-old New York Independent Venue Association, a group seeking government support to preserve local venues. On average, the association noted earlier this month, a venue will need $300,000 to sustain itself if they must stay closed until 2021. The Association estimates that there are approximately 90 of these venues in New York.

The shutdown seems likely. “Socially-distanced nightlife is not a sustainable business model,” Rigie added. “Dancing 6 feet apart is not intriguing to most people.”

But dancing any closer than that is risky, especially without face coverings. The Centers for Disease Control and Prevention notes that one way the virus spreads is person-to-person; respiratory droplets produced when an infected person coughs, sneezes, or talks.

“Any situation where people are near each other and not wearing masks is a set-up for the transmission of the virus,” said Dr. Aaron Glatt, chair of the department of medicine and infectious diseases at Mount Sinai South Nassau on Long Island. In a nightclub, he added, “people are practically on top of each other talking and sipping drinks, so there’s clearly risk for exposure.”

“You can imagine a restaurant with partitions. Imagine that at a nightclub. But nightlife is more than nightclubs,” said David Rosen, who runs various nightlife establishments, including The Woods and The Breakers in Williamsburg, Brooklyn, and serves on the NYC Nightlife Advisory Board. He co-founded the industry trade group Brooklyn Allied Bars and Restaurants. “Bars are in the same boat as nightclubs.” 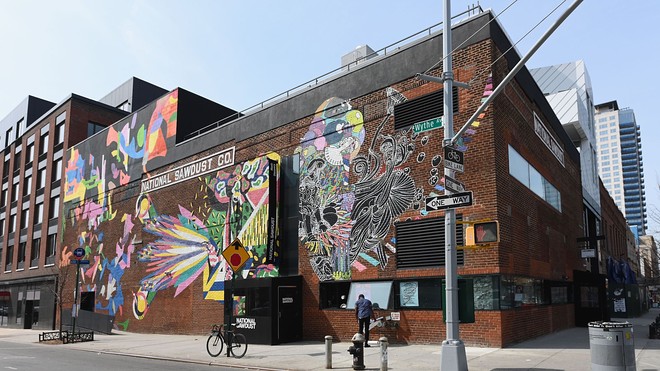 The size of some nightlife venues presents a steep financial challenge.

Thanks to capitalization, judicious spending of government aid and careful negotiations, Rosen anticipates weathering the COVID storm. He estimates that about 30% of nightlife businesses won’t make it. Crushed by the pandemic and financial burden, Kinfolk, a Brooklyn club, announced its permanent closure on July 16 in a letter to friends and family, noting: “We did not want this to be the way we said goodbye.”

Why would they? Nightlife pre-COVID was robust. According to a New York City Mayor’s Office of Media and Entertainment report, the bars subset alone of the nightlife aggregate, which includes restaurants and venues, accounts for 13,400 jobs, $492 million in employee compensation, and $2 billion in economic output.

“We’ve seen this show before,” said Ken Fishel, who believes the city has history on its side. “During the 1918 pandemic, the same things happened. Businesses, especially ones built around people congregating, such as sports and hospitality shut down. Within a few short years, the Jazz Age was on us. It all came roaring back. But the vaccine will be key.”

“People are tired of being stuck at home,” Bradley Fishel said. “They’re looking forward to resuming their lives. The demand for clubbing is there.”

Hospitality pro Ian Duke, the brains behind the Southampton Social Club on Long Island; the Baylander, a restaurant on a small aircraft carrier at the W. 125th St. Pier in Manhattan; and the currently shuttered Prohibition, a bar and music venue on the Upper West Side, knows how high the stakes and the hurdles are and remains optimistic. “There’s no upside to thinking negatively,” he said.

“If there’s any industry designed to handle adversity it’s hospitality,” he added. “There is adversity every day, there’s always something broken. And new regulations. This pandemic will break those with less experience and weak partnerships.”

The sheer size of some nightlife venues presents a steep financial challenge. That’s true for clubs as well as future enterprises that may take over the locations. Amid current economic and real estate uncertainty, Rigie asks, “Who is going to line up to take these spaces? And repurpose them with what? Vibrant nightlife is a major support to a neighborhood,” he said. “By repurposing the space, you’re devaluing that ecosystem.”

Burke concurs. “Beating this will take collaboration among the owner operators, landlords and mortgage holders. It’s an immense collaboration. There will be casualties.” She’s determined that the House of Yes won’t be among them.

“One alternative we have explored is using the space for education,” Burke said. “Schools don’t have enough room for social distancing and there are other organizations seeking space. We are exploring every option and that includes renting out and subleasing the space. We are committed to survival.”