Home
Stocks
The Tell: These market-beating stocks are still hedge-fund favorites — but performance is getting a little choppy
Prev Article Next Article

The stocks favored by big hedge funds continue to outpace gains by the broader market in 2020, but the ride is getting rougher thanks to rotation away from highflying growth stocks, says RBC Capital Markets.

The chart below tracks the basket of top hedge-fund holdings, which RBC dubs “Hedge Fund Hot Dogs” versus the S&P 500 SPX, +0.31%, which earlier this week moved back into record territory, erasing the pandemic inspired swoon that saw it drop 34% from its previous all-time high on Feb. 19 to its low on March 23. 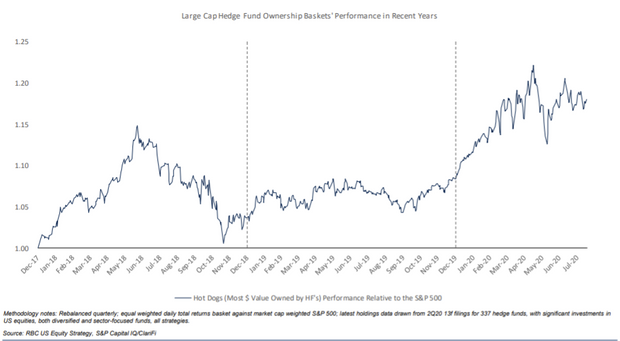 “Relative performance trends peaked in mid-May (as these names were victims of the broader rotation out of defensive secular growth that began at that time), bounced back in June and early July, and have been choppier again in recent weeks,” noted Lori Calvasina, head of U.S. equity strategy at RBC, in a Thursday note.

“These stocks have outperformed over time, but tend to suffer when the broader market sees a significant rotation out of growth and into value or when hedge funds de-risk and reduce equity exposure,” she said.

RBC’s basket is constructed based on quarterly 13-F filings that require large investors to disclose their long holdings within 45 days of the end of each quarter. The list of top holdings, unsurprisingly, is weighted toward the big high-growth names that have accounted for a large chunk of the overall market’s gains.

Calvasina said, “TIMT (Tech + Internet + Media + Telecom) accounted for 16 of the 20 Hot Dogs, up from 12 in 1Q20. Four of the five new additions to the list this quarter came from TIMT, and no TIMT names fell off the list.”

But some of the TIMT names near the top of the list, including Facebook and Alphabet, did see significant declines in ownership during the second quarter. And at the industry level, overweights in software and tech services returned to peak levels last quarter, while underweights in tech hardware and semiconductors fell to new lows.

“Hedge funds entered the second half of the year extended in their ‘growth’ exposure within tech and underexposed to the ‘value’ parts of tech,” she said.