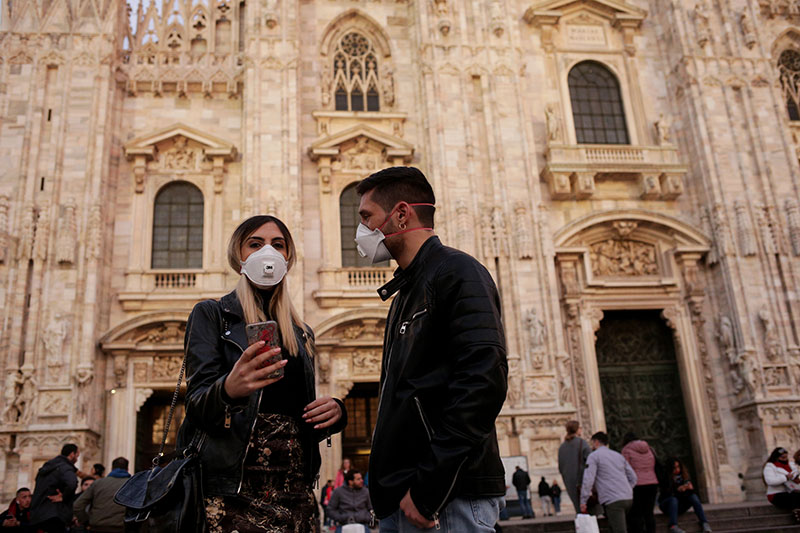 Economies were decimated by the crisis in the second quarter, and governments are desperate to foster a swift recovery. German Chancellor Angela Merkel on Thursday urged European leaders to work together to avoid reviving lockdowns, calling instead for unified action.

“Politically, we want to avoid closing borders again at any cost, but that assumes that we act in coordination,” Merkel said during a visit with Emmanuel Macron at the French president’s summer residence on the Mediterranean coast.

The uptick in cases in recent weeks has been blamed on social gatherings and travelers. Containment measures focus on targeted initiatives, such as clamping down on nightclubs, requiring masks in public areas and mandating people returning from hard-hit regions quarantine or prove they’re not carrying the disease. So far the measures have yet to show much of an effect.

German infections increased by more than 1,000 for a fourth straight day on Friday, rising by 1,586. While that’s still well below the peak of nearly 7,000 in the spring, Merkel this week ruled out any steps to ease restrictions until the outbreak is under control.

The government will need to impose fines on people flaunting hygiene and social-distancing rules, Merkel said.

Germany is requiring people returning from hard-hit areas to quarantine for two weeks or present a negative test to prevent the disease from spreading in schools and workplaces.

The country’s Robert Koch Institute, which has repeatedly called the recent trend “very concerning,” has declared a number of regions in Europe — including most of Spain — as risk areas. On Thursday, it added two coastal regions in Croatia and part of Romania to the list, while Luxembourg and three other Romanian regions were no longer seen as risky.

Germany started easing curbs on April 20, when shops were allowed to start resuming business. Students are returning to schools, but with distancing and hygiene measures in place.

France recorded 4,771 new cases on Thursday, a level not reached since mid-April. Masks must now be worn in busy outdoor areas of Paris and Marseilles. Nice has implemented general mask-wearing since Thursday morning, and Toulouse is to follow suit on Friday, the largest cities to do so.

Macron has ruled out another nationwide lockdown, saying the country’s response must be to “speed up vaccines, guarantee their access, and provide the best health response given what we know,” he told Paris Match magazine.

Testing, tracing, isolating the infected and broadening the wearing of masks when necessary are also key, while targeted local lockdowns could be implemented if need be, he said.

France started to gradually ease its lockdown from May 11, and re-opened tourist attractions — such as the Versailles palace and the Louvre Museum — over the summer under strict hygiene conditions.

Due to the resurgence of cases, some resorts have closed their beaches at night, with nightclubs still shut for the foreseeable future and a ban on gatherings of more than 5,000 people was extended until end October.

Italy has also seen a pickup in new cases, albeit more contained than elsewhere. On Thursday, the country reported 845 new infections, the biggest increase since May 16.

The government has closed nightclubs, banned dancing in public venues and made face masks compulsory from 6 p.m. to 6 a.m. in all places, including streets and squares, where crowds can gather.

Recent outbreaks have been traced back to parties in seaside resorts such as Porto Rotondo in Sardinia, as well as to people returning from vacations abroad. The government could move to isolate Sardinia, one of the country’s busiest summer vacation regions, Corriere della Sera reported Thursday, citing unnamed ministry officials.

After almost two months, Italy began emerging from lockdown on May 4, when about 4 million people went back to work.

Spain has re-emerged as the epicenter of the pandemic on the continent. The country reported 3,349 new infections on Thursday, compared with 3,715 a day earlier, which was the most since April 23.

The nation has appeared rudderless during the recent upsurge. Prime Minister Pedro Sanchez — whose handling of the pandemic has been widely panned — is on vacation with his family and hasn’t addressed the public even as bad news piles up.

Spain’s tourism industry is reeling, and the economy is on its knees. Some voters are on edge and any perceived political indifference could hurt the weak minority government that relies on separatists to stay in power.

Spain ended its state of emergency on June 21, entering a phase that the government has called a “new normal.” But one country after another has issued travel warnings, dealing a fresh blow to Spanish tourism.