Home
Stocks
Need to Know: Here’s why stock prices are unsustainable, according to this fund manager
Prev Article Next Article

In a week in which the S&P 500 set a record in the midst of a pandemic, it’s fair to at least consider the bottom 495 or so components.

Michael Batnick, the director of research at Ritholtz Wealth Management, points out 94% of the S&P 500 SPX, +0.31% components are trading below their 52-week highs, though the median gain is 63% from its 52-week low. This chart really demonstrates how tilted the recovery has been toward the bigger companies.

Pavese outlines all the uncertainties — including whether there will be a second, or third wave, of coronavirus, how many businesses will fold and whether record stimulus will create rampant inflation or whether the crisis will result in deflation. “What we do know is that we have never seen stock prices at such extremes coincide with this degree of uncertainty. We also know that living in an imaginary world of certainty can create big problems managing money in the real world,” he says in an investment letter.

Pavese says there are about to be the best opportunities in distressed investing in a decade, as he calls the current market unsustainable.

“If markets are trading at half of today’s levels in a year or two, it will seem obvious to everyone in hindsight, that today’s stock prices and extreme divergences were completely unsustainable,” he writes. “The consensus is eager to look past today’s earnings, through to next year’s V-shaped rebound in profits. But we are a long way from anything that resembles normal, as profit margins are likely to remain depressed by revenue shortfalls and incremental costs for years. As a result, today’s stock prices, still levitating near all-time highs, leaves little margin of safety and even less to get excited about.”

Former vice president Joe Biden officially accepted the Democratic presidential nomination, saying the U.S. will overcome what he called a “season of darkness” under his rival, President Donald Trump.

Pfizer PFE, +1.20% and BioNTech BNTX, +1.02% say their lead coronavirus vaccine candidate triggered a strong immune reaction and they could seek regulatory review as early as October. If approved, they currently plan to supply up to 100 million doses worldwide by the end of 2020, and approximately 1.3 billion doses by the end of 2021. Johnson & Johnson JNJ, +0.68% meanwhile, is preparing a 60,000-person late-stage trial of its COVID-19 vaccine.

Existing home sales data could show a jump in July, and flash U.S. manufacturing and services data are also due. The IHS Markit flash eurozone composite purchasing managers index slipped to a two-month low of 51.6 in August from 54.9 in July, as the U.K. said government debt topped £2 trillion for the first time. 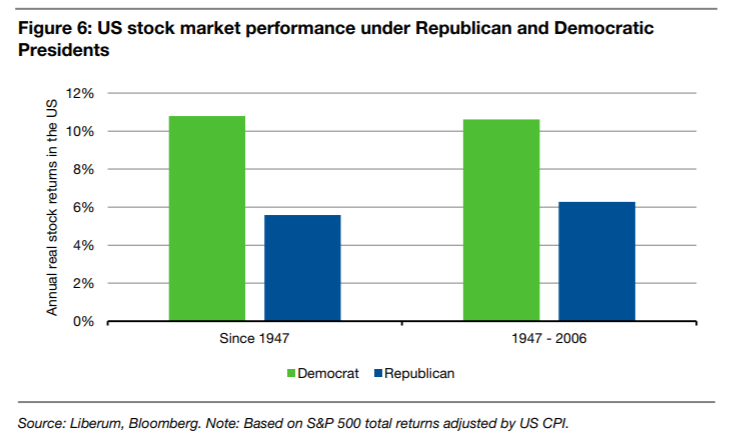 Liberum Capital Markets produced this chart showing stock-market returns in the U.S., adjusted for inflation, are better under Democratic presidents. The broker also screened for the best performing U.K. and European stocks under various administrations. Under Republicans, U.K. beneficiaries are pharmaceuticals — notably GlaxoSmithKline GSK, -0.36% — defense contractors, and food and tobacco, and European stocks that do well tend to be in health care and utilities. Under Democrats, media companies and real estate investment trusts in the U.K., and automotive and media stocks in Europe, are the beneficiaries.

What could be better than chocolate snow?

You may have heard of beer flights or whiskey flights. One restaurant is offering gravy flights.