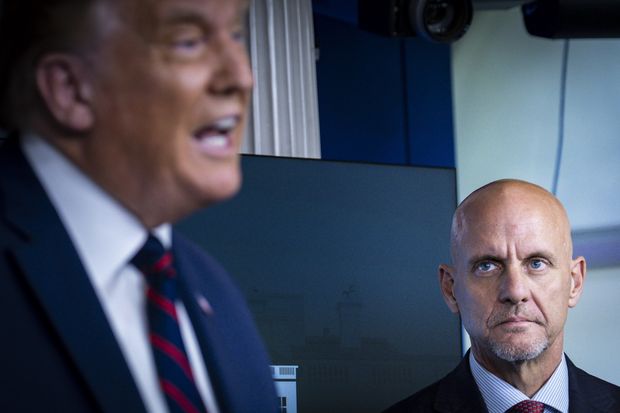 FDA Commissioner Stephen Hahn looks on as President Donald Trump announces that the Food and Drug Administration is issuing an emergency authorization for blood plasma as a coronavirus treatment during a press conference in James S. Brady Briefing Room at the White House on on August 23, 2020 in Washington, DC.

After Trump accused the Food and Drug Administration of trying to sabotage his re-election efforts, the FDA gave emergency approval for the use of blood plasma from recovered coronavirus patients, which hasn’t been proved by scientific trials. The Financial Times said Trump may order the FDA to grant approval to the University of Oxford vaccine to be distributed by AstraZeneca by the same manner.

While there’s no major economic report due for release on Monday, attention is building to the annual Jackson Hole conference, where Federal Reserve Chairman Jerome Powell is expected to outline the central bank’s new inflation strategy. Bank of England Gov. Andrew Bailey also will address that conference.

Shares of BT Group BT.A, +6.43% climbed 6% after Sky News reported the telecoms giant has asked Goldman Sachs to update its defense strategy from possible suitors. BT shares have been hurt after slashing its dividend. BT hasn’t yet received any takeover approaches, the report said.