Home
Stocks
In One Chart: Why you should stop saying ‘stocks are not the economy’
Prev Article Next Article

As the S&P 500 pushes further into record territory, more than erasing its pandemic-induced plunge despite a double-digit unemployment rate and uncertainty over the path of the COVID-19 pandemic, the reminder that “the stock market isn’t the economy” is in heavy rotation among investors and market pundits.

But one economist is tired of hearing it.

“While literally true, this platitude has long been used to imply the market is divorced from the fundamentals or ignoring the economy altogether. The reality, of course, is more nuanced,” wrote Neil Dutta, head of economics at Renaissance Macro Research, in a Monday note.

Opinion: These 2 charts explain why the stock market is so strong while the economy is still so weak

Market observers have regularly noted that the rally has been powered in large part by a narrow range of large-capitalization, tech-related winners—including behemoths Apple Inc. AAPL, +0.70% and Amazon.com Inc. AMZN, +0.07% —which have grown their businesses amid shutdowns and a shift to a work-from-home environment. Stocks more sensitive to the weakened economic cycle have seen periods of outperformance predicated on bouts of optimism over a vaccine or treatments, while suffering when pangs about the economic outlook are on the rise.

Dutta, in his note pointed to the chart below, which shows the market is rewarding companies doing well and punishing those doing poorly in the present economy. 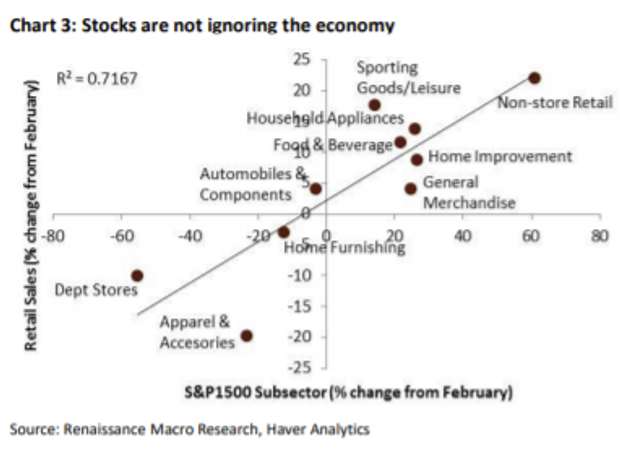 The chart plots the percent change since February of S&P 1500 subsectors against the comparable retail sales category. Those firms that have seen stronger sales have generally seen higher share prices, he said, which sends a clear message that “the market is not ignoring the economy.”

The S&P 500 SPX, +0.58% and the tech-heavy Nasdaq Composite Index COMP, +0.16% hit all-time highs on Monday. The S&P 500 reclaimed record territory last week, fully erasing the nearly 34% plunge that took it from its Feb. 19 finish to its March 23 low. The Nasdaq had long since returned to record territory and on Friday logged its 36th record close of 2020.

Dutta acknowledged that there is much economic activity that isn’t captured by the major stock indexes. While most listed companies are in the business of selling goods to other businesses and households, a trip to the barber or drycleaner doesn’t show up in the stock market although people-to-people services make up a big chunk of U.S. gross domestic product, he wrote.

But the stock market does serve as a “growth momentum barometer,” he said.

In other words, market participants care more about the rate of change in economic activity rather than the level of activity.