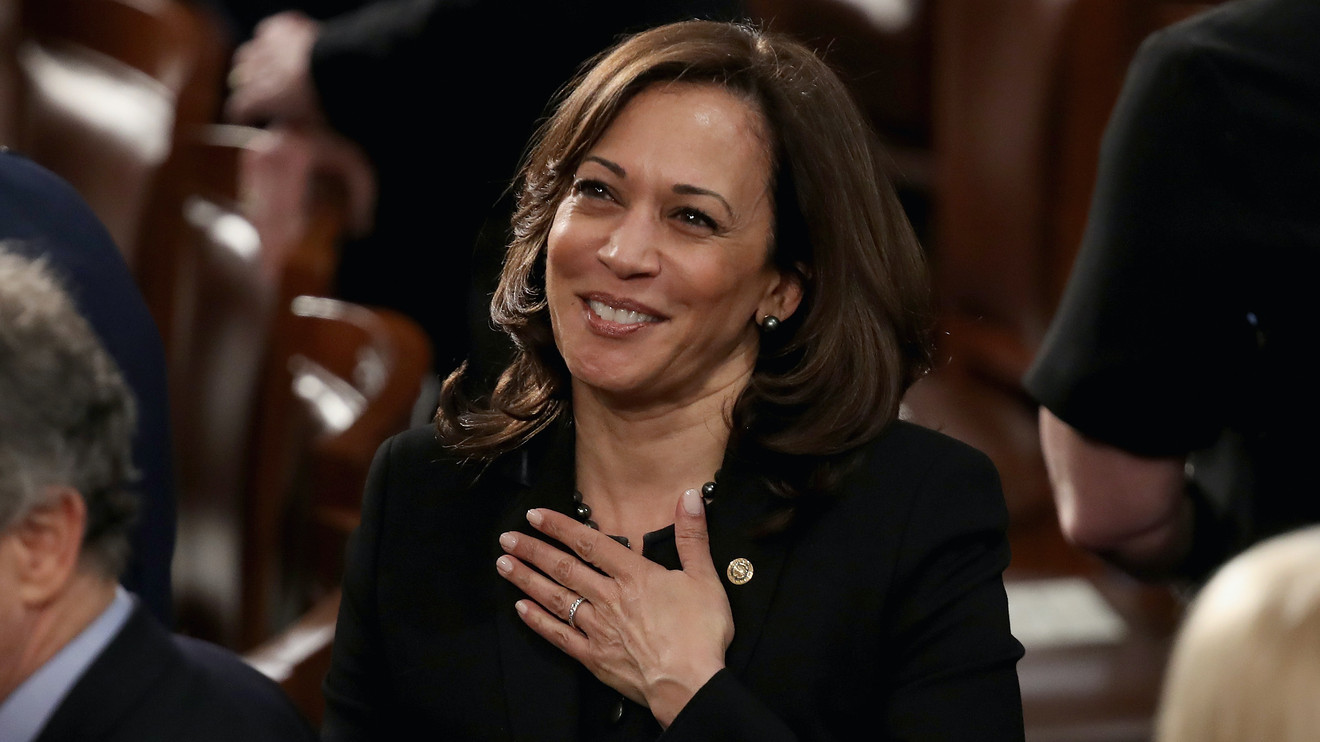 Until a few days ago, I would’ve said the answer was easy: boomer (along with President Donald Trump and Vice President Mike Pence; Democratic presidential candidate Joe Biden, 77, is in the Silent Generation). After all, Harris, who’s 55, was born Oct. 29, 1964 in Oakland, Calif. and demographers describe the 71 million members of the baby boom generation as those born between 1946 and 1964. A few others born in 1964: Michelle Obama, Boris Johnson, Jeff Bezos, Don Cheadle, Stephen Colbert, Courtney Cox and Sarah Palin.

But then I read Tim Dickinson’s new Rolling Stone article, “Kamala Harris, Gen X’s Moment, and the Fall of House Boomer,” which emphatically declared the California junior senator a Gen Xer by cultural standards. Generation X  — the 65 million American’s dubbed the nation’s “neglected middle child generation” — is the relatively small cohort that immediately followed the boomers, through 1979, preceding the millennials.

Dickinson wrote: “While many demographers mark 1965 as the beginning of Gen X, that’s culturally speaking, horse****.” He then grouped Harris with other celebrities born in late 1964, such as Eddie Vedder, Sandra Bullock, Lenny Kravitz, Eazy-E and Keanu Reeves, inferring that they’re more Gen X than boomer, so Harris is, too.

Read: The full text of Kamala Harris’s speech to the Democratic convention

After I, a boomer born in 1956, posted on Facebook FB, -0.74% the question about Harris’ generation, I received responses including this one: “The early 60s babies — tail end was not quite boomerish.” And this one from a researcher: “When we do cohort studies around popular culture and influences of events, etc., there is about a five year cluster 1962-1967 of late boomers/leading Xers who have many similarities – values, political influences, music, etc.” And one saying simply: “Gen X!”

Washingtonian.com writer Andrew Beaujon isn’t buying the Harris-is-a-Gen Xer-argument, though, based on her birth year. In his recent post, “Sorry, But Kamala Harris Is a Boomer,” Beaujon wrote: “Rules are rules, slackers.”

Or is she Generation Jones?

Others say Harris is really more of a Generation Joneser, as is Barack Obama (age 59, born August 4, 1961). To understand this line of reasoning, you need to meet Generation Jones.

Also see: Boomers are doing retirement their own way

Cultural commentator and sociologist John Pontell came up with the hybrid label in 1999 when he was looking for a name describing people like himself: a combination of the late or “trailing” boomers who were too young for Woodstock and the early Gen Xers who followed. Pontell says the birth years of Generation Jones go from 1954 to 1965.

Based on his research, Pontell, now 61, told Considerable.com, “over 80% of people in this age group, just overwhelmingly felt that they’d been mislabeled.” Pontell added that they say: “Oh wait, yeah, I never really did think I was a boomer. I didn’t think I was an Xer.”

Some late boomers, like New York Times journalist Richard Pérez-Peña, 57, defiantly prefer not to be called boomers because they think the word mostly fits early boomers who had, among other things, more sexual freedom than later ones. Pérez-Peña splits boomers into Boomer Classic and his cohort, Boomer Reboot.

Pontell says despite what people say about boomers and millennials, the “lost” generation known as Generation Jones is actually the biggest generation in all of U.S. history.

Be sure to read: Kamala Harris on student-loan forgiveness, Medicare, universal basic income, credit scores — and a tax on trading stocks

Pontell has said “the fact that the baby boom generation was pegged to the rise in birthrates was just a historical accident. It’s just a blatantly inaccurate way to determine who a generation is, to base it on something as random as a birthrate. Why not base it on how many rainy days there were in a year?”

The name Generation Jones comes partly from the anonymity that the name Jones conveys and also from the slang word “jones” or “jonesing,” which describes a yearning or craving. By that reasoning, members of Generation Jones, who began their adult lives during the rough economic times of the 1970s and had shared the idealism of children of the ’60s, “jonesed” for better breaks.

Transgender activist and Gen Joneser Jennifer Finney Boylan wrote in the New York Times that “if the zeitgeist of the boomers was optimism and revolution, the vibe of Gen Jones was cynicism and disappointment.” And, she added, “The fact that most people have never even heard of Generation Jones is the most Generation Jones thing about Generation Jones.”

As you can see, it’s possible to make a case that Kamala Harris could be described as either a boomer, a Gen Xer or a Generation Joneser. As millennial journalist Jill Filipovic writes in her new book, “OK Boomer, Let’s Talk: How My Generation Got Left Behind,” “the edges of all these cohorts are fuzzy.”

Hints from the Kamala Harris autobiography

Curious to see how Harris describes herself, generationally, I just read her autobiography, “The Truths We Hold: An American Journey.”

In it, she never calls herself a boomer. In fact, her only reference to boomers is this line: “As the baby boom generation continues to retire, we’re going to need more home health care aides — 1.2 million by 2026.”

But I found numerous references in “The Truths We Hold” suggesting to me that Harris is more boomer than Gen Xer, and probably not someone who’d call herself Generation Jones.

Related: There’s only one generation in U.S. history that’s considered to be more unlucky than the ‘Lost Generation’

On the boomer ledger: As a toddler, Harris went to civil rights marches with her Jamaican and Indian-born parents. At one of them when Harris was fussing, she writes, her mother asked, “What do you want?” trying to soothe her. “Fweedom!” Harris yelled back.

For example, as a child, she says she played with Barbies and sometimes started her day with Pop Tarts or Carnation Instant Breakfast. She and her sister Maya would “pretend that we were all going to marry the Jackson Five — Maya with Michael and me with Tito. (Love you, Tito!)” Their mom Shyamala drove a yellow Dodge Dart and the three of them watched CBS anchor Walter Cronkite together.

Fast forward to adulthood and the time Harris first met the children of her then-divorced boyfriend (now husband), Doug Emhoff. On that day, Harris writes, she wore Chuck Taylors, the black-and-white sneakers boomers wore as kids and then again, retro-style, as grown-ups.

That said, there are a few hints of Gen Xerdom in the book.

Harris talks about her parents divorcing when she was seven. Gen Xers were kids during a time of increasing divorce rates in America.

And Harris writes about rummaging through old boxes, including items her mom had saved. “I also found a couple of pot holders that Maya and I had woven on plastic looms,” she says. “Any reader who grew up in the 1970s probably knows just what I mean.”

But late boomers tend to be Republicans. And Harris’ notable career — from San Francisco District Attorney to California Attorney General to U.S. Senator — can hardly be described as one of a slacker or someone apathetic, words that have been used to malign Gen Xers.

And I didn’t find anything in Harris’ book or in her life suggesting a level of bitterness, pessimism, distrust of government or cynicism often used to denote members of Generation Jones.

So, while she may have some hints of Gen X and might technically belong to Generation Jones, I think Kamala Harris falls squarely in the boomer camp.

Richard Eisenberg is the Senior Web Editor of the Money & Security and Work & Purpose channels of Next Avenue and Managing Editor for the site. He is the author of “How to Avoid a Mid-Life Financial Crisis” and has been a personal finance editor at Money, Yahoo, Good Housekeeping, and CBS Moneywatch. Follow him on Twitter.

This article is reprinted by permission from NextAvenue.org, © 2020 Twin Cities Public Television, Inc. All rights reserved.