Think back to 2011, when you would see gold commercials on Fox News from Goldline, Lear Capital and Rosland Capital.

The sales pitch was the same: Protect your wealth. I bet you see a lot of pitches like that in your inbox.

Difference is, this time it’s real.

Paraphrasing analyst Luke Gromen, the Federal Reserve lends to the U.S. government at zero percent, and the U.S. government hands money to citizens. One of these days we are going to cut out the middleman. We haven’t crossed that Rubicon yet, but we might someday.

There are no brakes on this train. At the end of the track is pure Modern Monetary Theory (MMT).

The old-timers know — when this stuff happens, you have an honest-to-goodness inflation trade in the markets.

The inflation statistics are already beating expectations — in the middle of what should be a deflationary shock. The good news is that this is creating gigantic opportunities for investors.

My first car was a brown Pontiac 1000 that I inherited from my grandmother who passed away in 1989. It was essentially a Chevette. It probably cost around $5,000.

The fifth car was another black Highlander, 2017 this time, that I bought through a local dealership. It cost $40,000.

The average price of a new car in the United States is about $38,000. Only 10% of the population can afford that.

Now, cars are becoming more expensive for a bunch of reasons. First, the government has imposed more safety requirements over the years. Second, it has increased fuel-efficiency requirements.

This is an example of inflation by fiat — businesses pass along the cost of complying with laws and regulations to consumers.

Inflation is an inequality machine

If you want to look at something more immediate, food prices have skyrocketed in the past few months. Meat and poultry have jumped 11%, with beef and veal prices spiking 20%. Pork has jumped 8%. Egg prices, 11%. I’m sure nobody will freak out about this.

But there is also plain old monetary inflation. Inflation has been low the last 20 years, but it hasn’t been zero, either.

The problem is that incomes have barely gone up at all. And that is what we are going to see more of — wealthy people with the ability and means to protect themselves from inflation, and low-income people who are crushed by it.

Inflation is an inequality machine.

You might have seen the charts of plummeting real interest rates in recent weeks, which are now deeply negative. 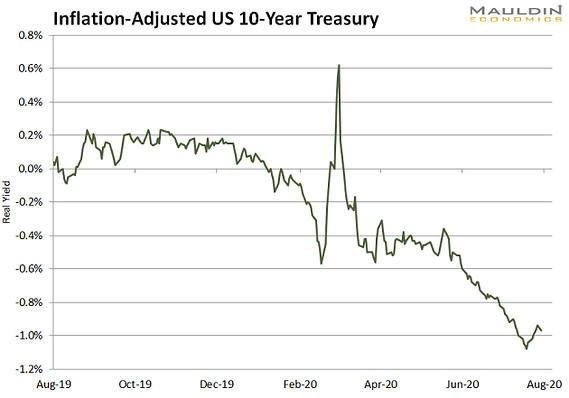 Negative real interest rates are the cause of everything that is wrong with the world.

When I first came into the business 21 years ago, the dollar was strong and interest rates were high. Financial conditions were tight. This meant that companies had to be very disciplined in order to sell goods overseas and meet debt service costs.

Now, financial conditions are very loose, and corporations are flabby.

I am starting to think that this is the rule, rather than the exception. Can you imagine a Treasury secretary today saying that he or she was pursuing a strong dollar policy? Can you imagine Fed Chairman Jerome Powell raising interest rates to 3%?

From a fiscal and monetary standpoint, the presidential election is more or less irrelevant. We’re on a path to financial destruction, and one outcome will get us there a little faster than the other.

If tech and financialization were the two big trends from the last 20 years, inflation will be the big trend of the next 20.

Jared Dillian is a contributor to MarketWatch and an investment strategist at Mauldin Economics. Follow him on Twitter @dailydirtnap.