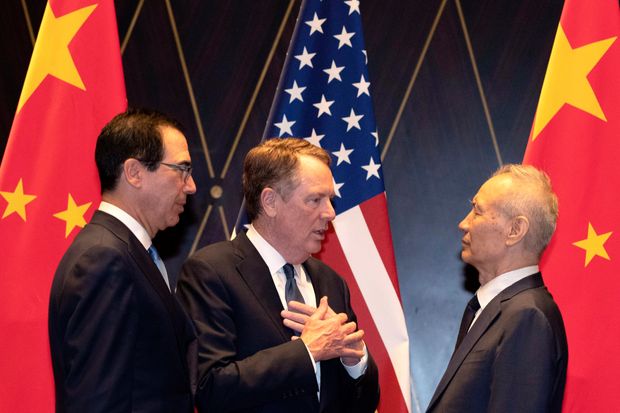 In this July 31, 2019, file photo U.S. Trade Representative Robert Lighthizer, center, gestures as he chats with Chinese Vice Premier Liu He, at right with Treasury Secretary Steven Mnuchin, left, looking on after posing for a family photo at the Xijiao Conference Center in Shanghai. U.S. and Chinese trade envoys discussed strengthening coordination of their government’s economic policies during a phone meeting Tuesday, Aug. 25, 2020, the Ministry of Commerce announced.

European stocks climbed Tuesday, getting a boost from the U.S. and China holding trade talks.

China reported that there was a “constructive” trade discussion that included Vice Premier Liu He, U.S. Trade Representative Robert Lighthizer and Treasury Secretary Steven Mnuchin. The U.S. said both sides “see progress and are committed to taking the steps necessary to ensure the success of the agreement.” Previously scheduled talks between the sides had been delayed.

That tone contrasts with the election campaigning of U.S. President Donald Trump, who said on Sunday in an interview he would be open to completely decoupling from China.

Of stocks in the spotlight, Aveva AVV, +1.59% rose 2% after it said it’s buying OSIsoft for $5 billion in a mostly cash deal to expand its position in industrial software.

Aveva is buying the company that’s 53% held by its founder and 45% held by SoftBank 9984, +2.44% and will fund the deal with a $3.5 billion sale of discounted shares, or rights issue. Aveva’s 60% shareholder Schneider Electric SU, +0.80% supports the deal and will fully take up its share of the rights issue.