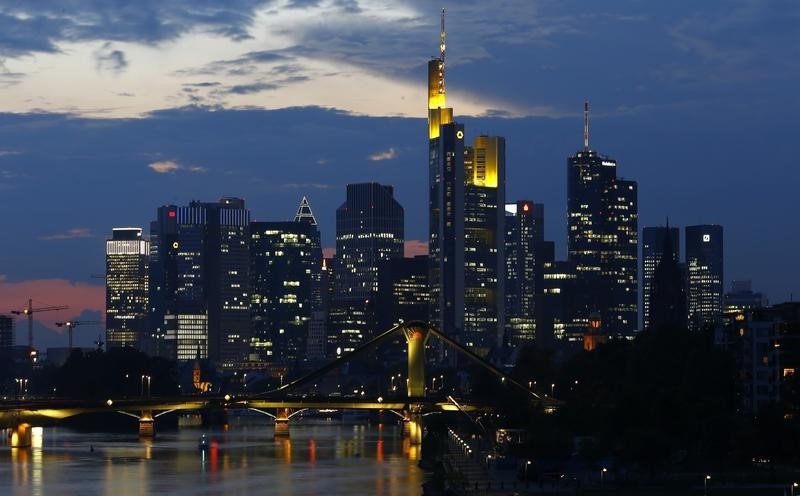 Investing.com – European stock markets pushed higher Tuesday, helped by German growth data not being as bad as feared as well as by positive comments after trade talks between the U.S. and China.

Germany’s economic output fell by a record 9.7% in the second quarter of 2020 at the height of the Covid-19 pandemic, the latest economic figures showed Tuesday, an improvement on the original release showing a drop of 10.1%.

“Details of the 2Q GDP report show the severity of the crisis in all its dimensions,” said analyst Cartsen Brzeski at ING, in a research note. “But the good thing is that now the worst is finally behind us.”

The more recent improvement should be reflected in the Ifo institute’s business climate index for August, due to be released at 4 AM ET (0800 GMT).

Also helping the tone were reports that top U.S. and Chinese officials had held constructive talks aimed at resolving concerns around the Phase 1 trade deal reached between the two countries in January.

China’s commerce ministry said in a statement there had been “constructive dialogue”, while the U.S. Treasury declared that “both sides see progress”. Hard data show that China has bought only a fraction of what it promised to buy from the U.S. in the deal it signed in January, largely because the pandemic crushed demand for imports such as oil and liquefied natural gas.

“This is consistent with market expectations of the Phase 1 deal staying healthy and likely to hold, even as U.S.-China tensions flare up along non-trade dimensions – technology, access to capital, geopolitics,” Reuters reported Citigroup (NYSE:C) analysts as saying in a research note.

In corporate news, Aveva (LON:AVV) stock rose 1.6% after the information technology company said it was buying OSIsoft for $5 billion in a mostly cash deal to expand its position in industrial software.

SAS (ST:SAS) soared 7.7% after the Stockholm-based airline said it signed a 3.3 billion Swedish kronor ($375.3 million) revolving credit facility after posting a net loss in the third quarter of fiscal 2020 due to the coronavirus pandemic.

Oil prices were mixed Tuesday, with disruptions to production operations in the Gulf of Mexico and at refineries on the coast still distorting price movements. Tropical Storm Marco was downgraded to a depression by the National Hurricane Center overnight, but Laura was upgraded to a hurricane, expected to make landfall on Thursday.

The American Petroleum Institute’s estimate of crude oil supplies last week are due later in the day.