Home
Stocks
In One Chart: Tesla may be ‘extremely frothy’ at these levels, but the stock’s ‘intraday crater’ has a silver lining, trader says
Prev Article Next Article

Tesla shareholders tangled with some serious volatility in Monday’s session, as the stock gapped up to record highs above $2,100 before reversing course by almost 10% just minutes later.

But there’s something rather bullish about that kind of whipsaw action in Tesla’s TSLA, -0.84% share price, according to Jani Ziedins of the Cracked Market blog.

“Rather than devolve into a truly dreadful bloodbath, dip buyers raced in and reclaimed a big portion of those losses,” he wrote in a post late Monday. “By the end of the day, the stock managed to close back above the psychologically significant $2k level.” 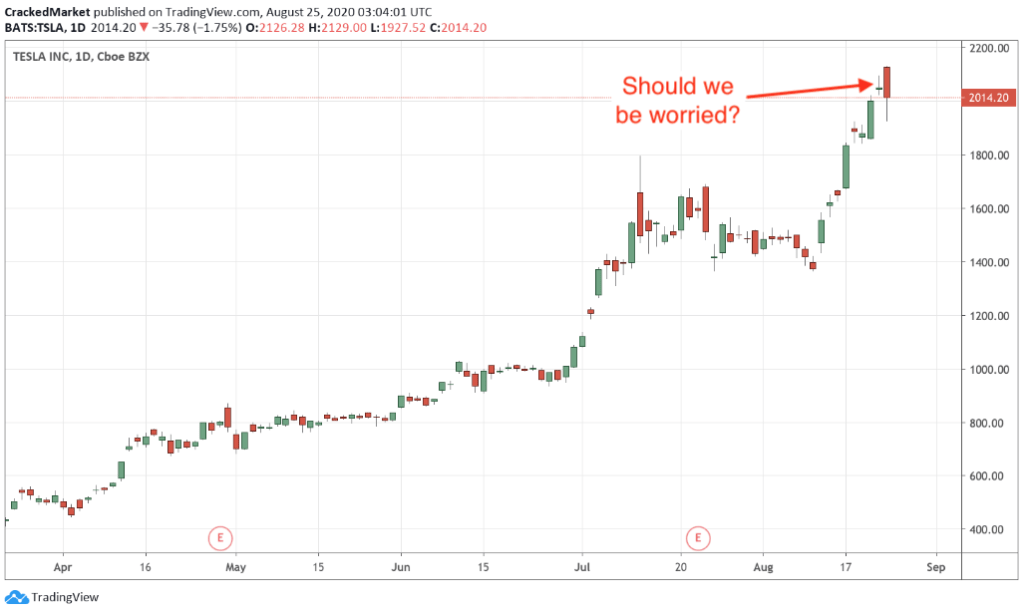 How significant is that $2,000 level? Ziedins says the stock is a buy above it, and a sell below it, with its “extremely frothy” levels vulnerable to catching downside momentum. Monday’s initial “$200 tumble could easily turn into $300 or $500 before we know what hit us,” he said.

He explained that too many Tesla faithful are committed to riding the stock all the way up, which ultimately means they’ll likely be holding it all the way down.

“Don’t be one of those people,” Ziedins wrote. “Have a plan to protect your profits, and then when everyone else is crying about the next TSLA tumble, you will be there with a pile of cash, ready to buy the next dip. But you have to get out first before you can do to do that.”

According to Ziedins’s figures, there was no need to unload Tesla as of Tuesday afternoon. But just barely. At last check, the stock was down but holding above $2,000, while both the S&P 500 SPX, +0.12% and the tech-heavy Nasdaq Composite COMP, +0.36% were moving higher. The Dow Jones Industrial Average DJIA, -0.41% was off triple digits.