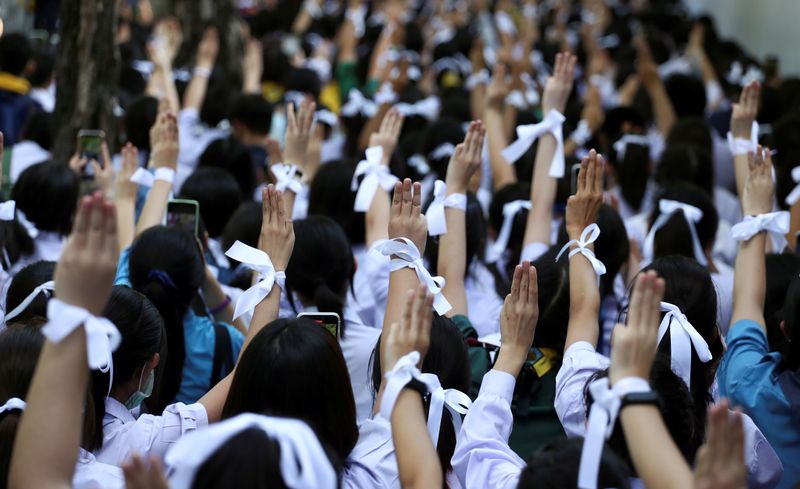 BANGKOK (Reuters) – The owner of Burger King’s franchise in Thailand became the latest company on Wednesday to bow to boycott calls by protesters who accused it of advertising on a television network they brand pro-government.

The protesters seek the departure of Prime Minister Prayuth Chan-ocha, a former junta leader, and new elections. Some have also called for reforms of the powerful monarchy of King Maha Vajiralongkorn, long a taboo subject.

Supporters of the student-led protests that have run for more than a month launched an online campaign to urge patrons to shun the franchise, Minor International Pcl, and other businesses that had advertised on Nation Multimedia Group.

A spokeswoman for Minor Food Group said it was pulling advertisements.

“The company accepts the views of its customers and will consider the use of appropriate media, with immediate effect,” the group said in a statement to Reuters.

Nation Multimedia Group’s chairman, Shine Bunnag, told Reuters the boycott was “social bullying from a group of keyboard thugs”, however.

It has highlighted the emerging political challenge for companies from a protest movement that has grown from Thai campuses with strong support on social media, particularly among young people.

In another sign of a company making clear it was not siding with the Thai government, Facebook (NASDAQ:FB) said on Wednesday it would launch a legal challenge to a demand that it block access to a group that often mocks the monarchy.

“The political division in society is permeating to businesses… putting companies in a very tight spot,” said Ben Kiatkwankul of Maverick Consulting Group, which advises companies on reputation and government affairs.

“It is almost impossible to please everyone,” he told Reuters.

There are parallels with Hong Kong, where businesses seen as antagonistic to the democracy movement were boycotted by its supporters in favour of ‘yellow’ companies that back the movement in contrast to ‘blue’ businesses deemed pro-government.

The biggest of dozens of street protests across Thailand to date drew more than 10,000 people in Bangkok on Aug. 16, but social media shows broader support, with some protest hashtags used or shared by millions of accounts.

The Thai-language hashtag #bannationsponsors began trending late last week after a reporter from Nation, widely seen as conservative, failed to identify herself when interviewing protesters at a rally.

Nation, which also runs an English-language website, said it had reprimanded the reporter, though Shine, its chairman, said she had been scared by “the mob”.

“We are not the government’s voice. We are media that stand with the people. Our principles here are clear: nation, religion, monarchy. Emphasize, monarchy,” he said by telephone.

Shine said Nation’s ratings rose as much as 20% during the incident over the reporter, with some companies having increased their advertisement buys, while the withdrawals had no impact.

“Social bullying is dirty and undemocratic,” he said. “We will not be scared”.

Student protestor Tanawat Wongchai said the boycott aimed to ensure Nation was neutral. One of his tweets with the boycott hashtag was retweeted more than 1,000 times.

“If we want the media to change and improve, we have to pressure those sponsors,” he told Reuters.

Besides running more than 100 Burger King outlets, Minor Food is the domestic franchise owner of Swensen’s and Coffee Club. It also has its own brand, the Pizza Company.

Its shares fell 0.45% on Wednesday, compared to a 0.44% rise in the benchmark index. Burger King’s global owner is Restaurant Brands International (NYSE:QSR) Inc..

Food delivery service Foodpanda, a unit of Delivery Hero SE, said after being targeted last week that it would stop advertising on Nation television and “improve marketing practices”.

Thailand’s Yanhee Vitamin Water also said it would stop ads on the outlet and valued its customers’ opinion.