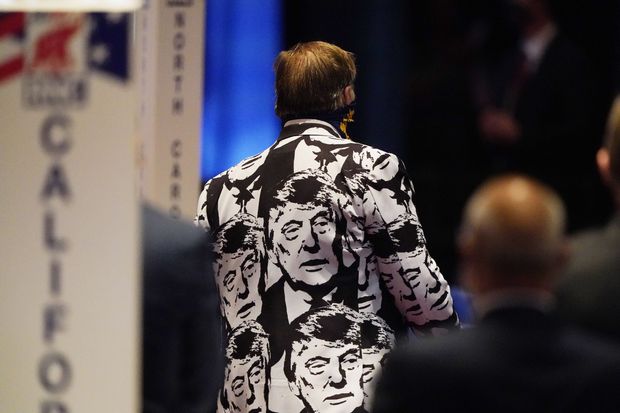 One delegate at the Republican National Convention boldly goes against the prevailing red, white and blue motif.

Want to drive a Trump supporter crazy? Tell them President Jimmy Carter created more jobs—far more in both absolute and relative terms—than President Donald Trump ever did. More on this later.

It was true even before the economy crashed at a 33% pace in the second quarter, and it’s even more true now. And that economic crash? It makes Herbert Hoover’s 1929 and George W. Bush’s 2008 look like dinky little potholes in the road.

Stuff like this isn’t believed by Trump, of course. Everything he finds disagreeable is by default “fake news,” and folks like me who challenge him, well, we’re enemies of the American people. Of course the true enemies are people like Trump himself—people in positions of power and authority who disrespect Americans by denying facts, avoiding truth, and lying day in and day out.

All of this has been on display during this week’s Republican convention, which has condensed Trump’s life and presidency into one long infomercial. It has reinforced everything his followers—generally white, generally male, generally older, generally rural, generally lesser-educated and generally left behind—have always been eager, desperately eager, to believe. Trump’s cheap, my-pillow-guy-like hucksterism has always worked for him in the past, he has always gotten away with it—why stop now?

It remains incredible that a man who has told more than 20,000 lies as president, and in fact has been a lie and a cheat his entire life (that’s not me talking, that’s Trump’s sister) is looked up to by his followers as the paragon of truth, the only one who can be believed.

It remains incredible that a guy who lives high atop Fifth Avenue and brags about being a billionaire, has convinced them that, yes, he’s just like them.

It remains incredible that a guy who doesn’t read—again, according to his sister and a parade of aides and advisers—has convinced them that he’s a “big brain” who knows more than the generals, more than the scientists, more than the doctors.

It remains incredible that a guy who dodged serving his country thanks to a phony note that a doctor wrote as a favor to Trump’s Dad, has convinced them that he’s a super patriot, while true war heroes such as decorated combat veterans Robert Mueller and Alexander Vindman are scum and traitors.

It remains incredible that a guy who goes to church twice a year (three if you count his recent tear-gassing of a priest so he could pose for a tawdry photo op) can’t name even one favorite saying from the Bible he held up for that photo—yet has convinced them that he’s a man of deep faith.

It may be too easy to dismiss the idea that Trump’s followers are low-information voters, rubes who don’t know any better. But I won’t, because five years after he glided down that escalator at Trump Tower and said he was running, it’s the closest description that fits.

I suppose the reasons are many: The decline of school subjects like history and civics, and the resulting rise of ignorance, may be one. The death of local newspapers, and with it, the creation of information vacuums that are easily filled by demagoguery and disinformation may be another. The rise of media tribalism—silo-like sources of information that allow citizens to congregate and communicate only with those who share like-minded beliefs—is also a factor.

It’s all one toxic stew that allows us to have not just different opinions, but far worse, different facts.

Back to Jimmy Carter and jobs—and one example of how so many of Trump’s supporters are out to lunch when it comes to the truth. Carter is not seen as much of a president: A 2017 CSPAN survey of historians ranked him only the 26th best.

Yet when it came to jobs, Carter’s 48-month presidency was great, adding an average 214,000 jobs to the economy each month. But even though the population today is about 45% bigger, an average of just 185,000 jobs were added during Trump’s first 37 months on the job—just before the pandemic crushed everything. It’s a fact: In both absolute and relative terms, Trump falls well short of Jimmy Carter.

Yet Trump claims—and his followers believe—that he has been a jobs machine, that we never had it so good.

This is just one example. Economic growth, the stock market, global respect for America, on and on and on: Nothing Trump says has been true. For some reason, it all reminds me of a classic line from “Seinfeld,” where George Costanza, a noted liar, tells Jerry: “Just remember: It’s not a lie if you believe it.”