Home
Stocks
Election: McConnell slams Democrats over treatment of middle America: ‘They prefer that all of us in flyover country keep quiet’
Prev Article Next Article 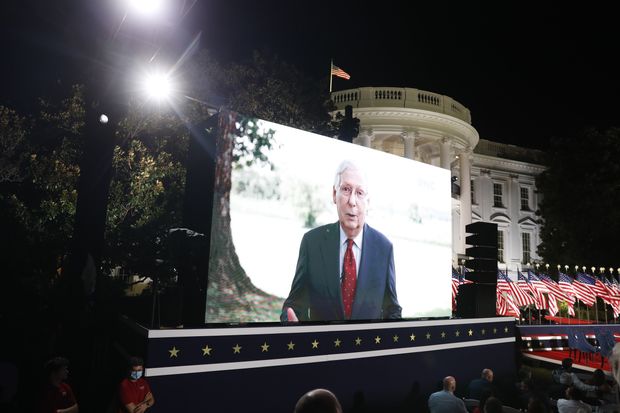 Senate Majority Leader Mitch McConnell is displayed on a screen while speaking virtually during the Republican National Convention on the South Lawn of the White House on Thursday.

Senate Majority Leader Mitch McConnell took a jab at the Democratic Party over their treatment of middle America in televised remarks at the Republican National Convention on Thursday night.

“Today’s Democratic Party doesn’t want to improve life for middle America,” he said. “They prefer that all of us in flyover country keep quiet, and let them decide how we should live our lives.”

He continued: “They want to tax your job out of existence and then send you a government check for unemployment. They want to tell you what kind of car you can drive, what sources of information are credible and even how many hamburgers you can eat.”

McConnell, a Republican senator from Kentucky, went on to voice his support for President Donald Trump who, he said, like himself will “stand our post on behalf of the millions of Americans whose stories aren’t told in today’s newspapers.”

When it comes to America’s middle class, both Trump and Democratic presidential nominee Joe Biden have sought to convince voters that they are the best choice to support.

To do so, Biden has proposed expanding Obamacare by offering a public-insurance option and increasing the federal minimum wage to $15 an hour.

Trump has taken a different approach and is advocating for an income-tax cut for middle-income families. He has also floated the idea of a capital gains tax cut.

Over the course of the pandemic, nearly 30 million Americans have lost their jobs, pushing the unemployment rate to above 10%.