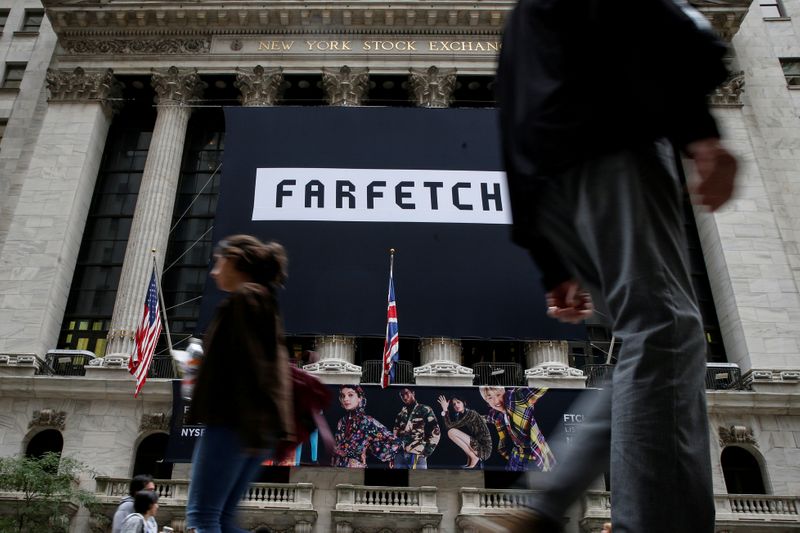 LISBON/NEW YORK (Reuters) – A day after the shooting of Jacob Blake in Kenosha, Wisconsin, searches for the term “Black-owned businesses” began to surge on Google (NASDAQ:GOOGL) Trends, as social media users called out for suggestions on where to spend their money in a way that supported the Black community.

Some retailers have responded to the trend. Companies from health and beauty outlet Boots to luxury goods website Farfetch (NYSE:FTCH) and independent business platform Etsy (NASDAQ:ETSY) have struck deals with Black-owned businesses.

Target (NYSE:TGT) in an Aug. 17 memo pledged to “source and design significantly more products from Black creators, designers, vendors, agencies, contractors, and suppliers.” Last month, Target made it easier for shoppers to identify which products on its web site are Black-owned or Black-founded with a badge.

“NO ONE WAS EXPECTING IT”

Around a month after Floyd’s death, campaigners in the U.S. and UK organized dedicated days encouraging consumers to spend at Black-owned businesses and share their purchases on social media.

Black Pound Day in the UK, now a recurring monthly event, generated over £80,000 ($100,000) in its first two iterations on June 27 and Aug. 1, according to receipts uploaded to the campaign’s website.

“No one was expecting it. Everyone was running out of stock,” said Khalia Ismain, owner of Jamii, an online marketplace that offers products from nearly 200 Black-owned businesses in the UK.

Businesses listed on Jamii saw record profits around Black Pound Day. An analysis by Jamii of 10 businesses that volunteered their data showed a 369% increase in revenue in June. Clickthrough rates and website hits remained above May levels into August, Ismain said.

Six other business owners in industries from fashion to food as well as heads of Black business directories representing over 2,000 Black-owned businesses in the UK told Reuters that sales multiplied two- to four-fold in June and have settled at a level higher than before the 2020 Black Lives Matter protests.

Many businesses report a continuous influx of offers from retailers to stock their brands and support young Black business founders and professionals.

Retailers from Boots to Farfetch and Etsy have struck deals with Black-owned businesses to stock or list their products.

A member of Amazon.com Inc (NASDAQ:AMZN)’s “Influencer Program,” which allows users to curate product recommendations for their followers, set up a page allowing shoppers to filter for products from Black-owned businesses. The listing includes scented candles, lipstick and leave-in hair conditioner.

Farfetch added a “Black designers” filter to its “Shop by” dropdown menu in early July, which is now outperforming other filters, a spokeswoman said.

Independent retailer platform Etsy said its “Black-owned shops” vertical set up in the wake of the protests was one of its top-performing pages in the most recent quarter ending June 30. Wolf & Badger, another marketplace for independent brands, is considering implementing a similar feature after receiving regular customer emails inquiring which businesses on its website were Black-owned.

Black-owned clothing line AAKS, which was listed by Elle, Refinery29 and others as a Black-owned business to support after Black Lives Matter, saw sales triple within a month. It has since been approached by six larger retailers across Europe, the UK and the U.S. keen to stock its products, founder Akosua Afriyie-Kumi said.

Part of the surge has come from Black consumers seeking to support their own community, but some also have seen interest from non-Black consumers for the first time.

“I had white women getting in touch with me saying they’d been following me for ages but just didn’t have the courage to buy my stuff,” said Nana Evans, the London-based owner of clothing line Love YaaYaa. “Now, they’re not just wearing it, they’re posting pictures of themselves in a headwrap on Instagram.”