Home
Stocks
The Conversation: Gun sales have skyrocketed since March — here are 3 reasons why
Prev Article Next Article 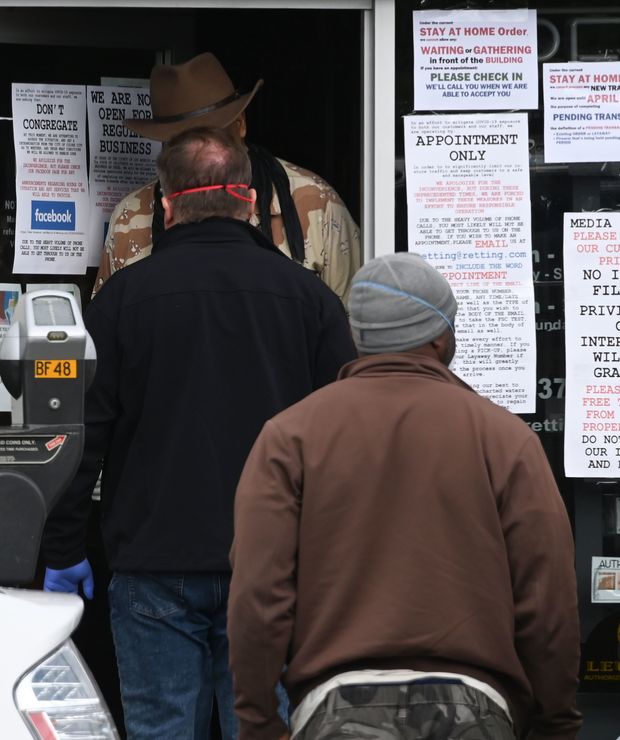 People wait outside the Martin B. Retting gun shop in Culver City, Calif., in March.

Americans have been on a record gun-buying spree in recent months.

Amid the COVID-19 pandemic and protests for racial justice, the gun industry’s trade association, the National Shooting Sports Foundation, estimates that gun sales from March through July were 8.5 million. This is 94% higher the same period in 2019.

These estimates are based on the number of background checks conducted by the National Instant Criminal Background Check System. The FBI reported that eight of the weeks in this period are in the top 10 highest weeks since the agency began collecting data in 1998.

Gun sales typically have seasonal cycles, with more guns being sold in winter months, and increase in presidential election years and after high-profile mass shootings. However, the 2020 pandemic spurred a record-setting surge in demand for firearms.

Gun sales first spiked in March, when lockdown orders began in the U.S. The figures jumped again in June following nationwide protests over the killing of George Floyd.

Our research examines American gun culture and offers insights into the complex relationship between Americans and guns. We believe there are three general reasons why people are purchasing firearms now.

A study we presented in 2019 shows that Americans feel buying a gun is a way of asserting and maintaining independence. Independence is threatened during the pandemic, when a concern for public health may curtail some individual freedoms, including the freedom to travel, operate some businesses, assemble in large groups or visit the elderly.

Gun ownership can be motivated by the belief that having guns helps to ensure freedom to do and live as one chooses, particularly for individuals concerned with protection and defense.

The National Shooting Sports Foundation estimates that 40% of recent gun buyers are doing so for the first time, partly driven by citizens’ perceived need to protect themselves in a period of uncertainty and civil unrest, as well as calls to defund the police.

Gun owners also find comfort and security in routines. This means existing gun owners may purchase additional guns in an effort to maintain a sense of normalcy.

Another reason relates to market conditions. Governors chose to include gun retailers as “essential businesses,” allowing them to remain open during many statewide closures in March and April.

This reinforced the legitimacy of guns and gun retailers in the U.S., by strengthening perceptions of gun purchases as appropriate and necessary.

Meanwhile, gun retailers have struggled to keep firearms, ammunition and accessories in stock. When consumers face scarcity, they may experience a sense of urgency to purchase, and they may be willing to travel further, pay more or purchase a different item than they had initially sought.

Finally, guns can provide a tangible basis for social connection. Social bonding through consumption is a well-established phenomenon in consumer research.

Retailers facilitate this by serving as a social hub and providing expertise on specific products. Visiting a firearms retailer and buying a gun can also enable consumers to feel socially connected to like-minded others.

According to our research, going to shooting ranges and hunting are lower-risk activities in terms of accidental shootings. We speculate that because these activities can be done outdoors, while wearing masks and with distance between people, they may also involve lower risk for COVID-19 transmission.

Americans who haven’t joined the buying frenzy may question the use of a gun against a virus or rioters in faraway cities. During a time of crisis, citizens want to feel connected, secure and independent. For some Americans, buying guns may help them do so.

Also read: Recent vigilantism highlights the complicated relationship between violence and justice at the core of American democracy