Home
Market
StockBeat: One Swiss Bank to Rule Them All?
Prev Article Next Article 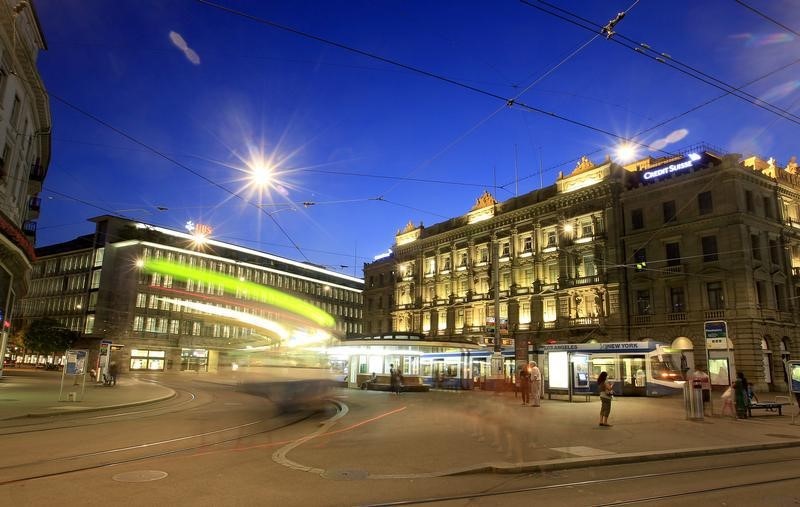 Investing.com — The heads of Switzerland’s biggest banks are reportedly planning to merge the two in a deal that would restore their global competitiveness and cement their dominance of the wealth management industry – if only they can set aside a rivalry that has spilled over into outright enmity in recent years.

According to InsideParadePlatz, an often scurrilous but usually well-sourced gossip site for Swiss bankers, the plan is being cooked up by the chairmen of UBS Group (SIX:UBSG) and Credit Suisse (SIX:CSGN), both of whom approve the deal in principle. Both stocks were outperformers among European banks on Monday, Credit Suisse stock rising 2.3% and UBS shares rising 1.1%.

Under the plan, the two would merge by the end of next year. Neither bank has confirmed the report.

Strategically, such a merger would have a lot going for it. Cost efficiencies would be sizeable – InsideParadePlatz reckons around 15,000 of their combined workforce of 120,000 would be at risk, of which “at least 5,000” would be in Switzerland. That’s important given that there is no end in sight to the squeeze on revenues from the banks’ core lending business due to sub-zero interest rates in Switzerland and elsewhere.

Additionally, CS’s wealth management business would further strengthen UBS’s leadership in managing the money of the world’s super-rich, whose portfolio ideas and activities are also a valuable source of business for the pair’s investment bankers.

A further consideration may be that a stronger combined balance sheet would allow the banks to reclaim lost market share in global securities markets. That would represent a clear shift in strategy, given that both have scaled back their activities there since 2008, but the results of the big Wall Street houses – and U.K.-based Barclays (LON:BARC) – so far this year have been a powerful argument for the ability of securities markets to generate revenue and profit precisely when traditional lending can’t.

But the deal also creates plenty of problems of its own. A combination would – to all practical purposes – be a takeover of Credit Suisse by UBS. Relations between the two houses have never been good, especially since the defection of CS wealth management boss Iqbal Khan to UBS, to which CS reacted with a legally-dubious surveillance campaign that cost former CEO Tidjane Thiam his job.

One can argue that Khan would be ideally placed to pick and choose those CS managers worthy of keeping their place in the combined team, but the process of managing such egos will be even trickier than usual.

InsideParadePlatz argued that CS’s current CEO Thomas Gottstein, a Swiss native, would be a shoo-in for the CEO spot – principally because UBS chairman Axel Weber would keep his position on the combined board and having foreigners in both top slots would be politically awkward.

That would mean no place for Ralph Hamers, the former head of ING who is set to succeed outgoing UBS CEO Sergio Ermotti in November.  Any faint echoes of Andrea Orcel’s abortive leap from UBS’s investment bank to Santander (MC:SAN) last year are, of course, entirely accidental, but none the less amusing.