Home
Stocks
The Tell: No longer seeing a recession, fund managers are beginning to shift into industrials and value stocks, Bank of America survey finds
Prev Article Next Article 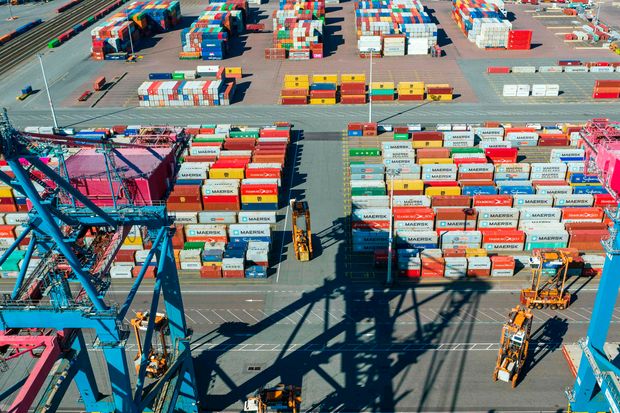 This file photo taken on August 24, 2020 shows an aerial view of cargo containers waiting to be loaded at terminals of the Port of Gothenburg, a busy shipping centre on Swedens west coast.

Fund managers are rotating but not chasing stocks after the massive rally from March lows, according to the latest reading of Bank of America’s popular fund manager survey.

The survey found that cash levels rose by fund managers, to 4.8% of their portfolios in September from 4.6% in August. At the same time, investors allocated more cash to industrials, small capitalization stocks and value at the expense of technology, healthcare and large caps. 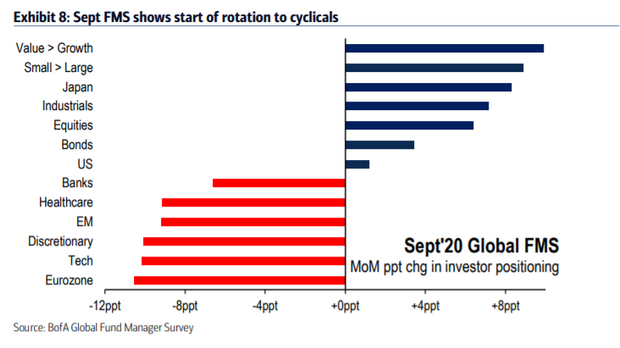 The fund managers did not rotate regions though, still preferring the U.S. over European, U.K. and emerging markets.

A net 18% are overweight equities which is not particularly high in the history of the survey.

The fund managers are particularly bearish about the U.K. UKX, +1.31%, where new concerns about Brexit are being raised. A net 35% are underweight U.K. equities, the worst showing since March 2018.

Strategists led by Michael Hartnett said positioning implies a range of the S&P 500 index SPX, +0.94% between 3,300 and 3,600, and that the cyclical rotation is still in its early phase. 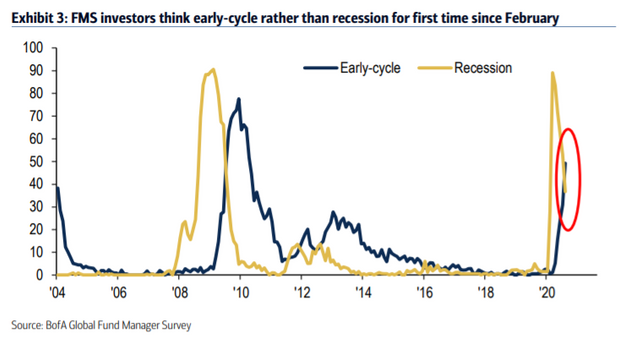 For the first time since February, more investors say the global economy is in an early cycle phase rather than recession.

The fund managers also were asked about the bond market, where yields TMUBMUSD10Y, 0.683% remain depressed. A credible vaccine is the most likely trigger for higher yields, according to 41% of the panelists.