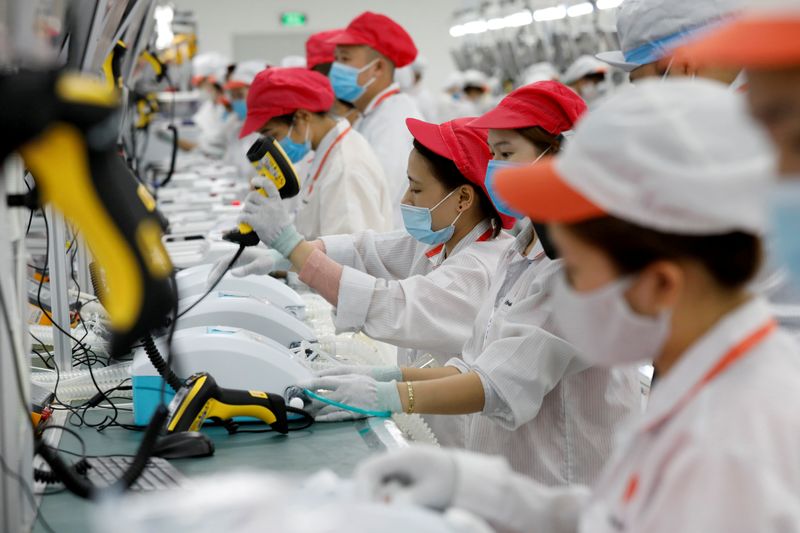 Asian firms’ outlook for the next six months tracked by the Thomson Reuters/INSEAD Asian Business Sentiment Index <.TRIABS> jumped to 53 in the third quarter from an 11-year low of 35 in the second, according to the survey of 103 companies across 11 Asia-Pacific countries.

It was also higher than the 50-point mark, which indicates a positive outlook.

The survey comes as the easing of coronavirus restrictions across Asia has reduced pressure on hard-hit economies, though the experience has varied across the region, with some still in recession and others, like China, seeing a steady recovery.

More than two-thirds of the companies polled said they saw the pandemic, or a fresh spike in COVID-19 cases, as a top risk. About 14% said a global recession was their biggest concern, while the rest flagged uncertainty over the upcoming U.S. election in November and other risks.

“If it was just because of Asia, I think the numbers would be more positive but the reality is the world is not just Asia,” he said, pointing to greater uncertainty in Europe and the United States.

The United States has reported the greatest number of COVID-19 fatalities, while rising numbers in Europe are now threatening to shut down parts of the continent again.

Some 28% of companies in the third quarter were positive about their outlook, the survey showed, up sharply from 7.6% in the second quarter. About 60% of the firms polled said they did not hire or lay off people this quarter, in contrast to the second quarter’s survey in which 63% said they had cut jobs.

The survey was conducted between Aug. 31 and Sept. 14.

While countries in Asia have had mixed success in containing the coronavirus and its fallout on their economies, the Asian Development Bank expects output in the region to shrink for the first time in nearly six decades this year.

China, where the coronavirus was first detected, has largely managed to contain its spread and South Korea and Japan have kept case numbers relatively low by global standards despite all three countries seeing a second wave of infections.

But elsewhere in the region the outbreak is worsening. India, for instance, has reported the second-highest number of cases globally.

Indeed, some investors are shunning Asia’s riskier, high-yielding markets, despite the ample liquidity pumped into the financial system by central banks globally this year.

Satish Shankar, the Asia-Pacific managing partner of business consultancy Bain & Company, said many companies in the region would “need to fundamentally transform their business models” to survive.

But he added that Asia’s economic rebound would be “strongly linked” to the recovery in the Chinese economy.

China expanded 3.2% in the second quarter, and looks set to grow this year.

Some China-based firms in the survey said the upcoming U.S. election was their primary worry alongside COVID-19.

The U.S. government is threatening to delist Chinese companies that do not meet U.S. accounting standards while Washington has cracked down on Chinese tech firms amid worsening relations between the world’s two largest economies.

Grant Pan, chief financial officer of Chinese wealth manager Noah Holdings (N:NOAH), which is listed in the United States, said the firm was looking at “possible alternatives as a safety net, including the Hong Kong and Chinese capital market”. Noah Holdings was among the companies surveyed.

Note: Companies surveyed can change from quarter to quarter.