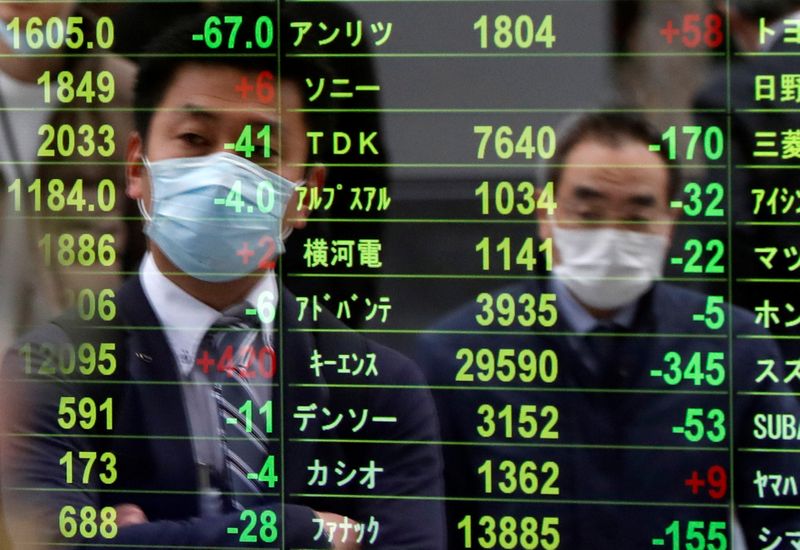 NEW YORK (Reuters) – Asian stocks were set to open higher on Wednesday after tech-fueled Wall Street gains although focus is shifting to renewed U.S.-Sino tensions, which could weigh on investor sentiment.

In currency markets, a rising greenback could hold back regional currencies like the Australian and New Zealand dollars during Asian hours.

The dollar index (=USD) rose 0.441%, with the euro (EUR=) down 0.01% to $1.1705 after Chicago Federal Reserve President on Tuesday mentioned the prospect of raising interest rates.

“The U.S. dollar move will probably be the dominant move for other currencies,” said Commonwealth Bank of Australia (OTC:CMWAY) currency analyst Kim Mundy.

Wall Street stocks rebounded on Tuesday, led by a 5.7% jump in Amazon.com Inc (O:AMZN) after Bernstein upgraded the stock to “outperform” on an expected boost from premium subscribers and third-party merchants even once the pandemic is contained.

U.S. stocks had tumbled this month as investors dumped heavyweight technology-related stocks following a stunning rally, which lifted the S&P 500 and the Nasdaq to new highs.

In Asia, Japan’s markets reopen on Wednesday after a two-day public holiday, which could trigger some volatility.

The Reserve Bank of New Zealand also announces its monetary policy decision, although analysts expect the official cash rate to remain unchanged at 0.25%.

Sterling last traded at $1.2734, up 0.02% on the day after British Prime Minister Boris Johnson told Britons to go back to working from home, along with new curbs on pubs, bars and restaurants that he said could be in place for as long as six months without some form of vaccine.

Investors will continue to keep a close eye on China tensions.

U.S. President Donald Trump told the United Nations General Assembly on Tuesday that China must be held accountable for having “unleashed” COVID-19 on the world, prompting Beijing to accuse him of “lies” and abusing the U.N. platform to provoke confrontation.

China’s President Xi Jinping struck a conciliatory tone in his pre-recorded virtual address to the General Assembly, calling for enhanced cooperation over the pandemic and stressing that China had no intention of fighting “either a Cold War or a hot war with any country.”

Xi also announced plans to boost his country’s Paris climate accord target on Tuesday and called for a green revolution, just minutes after Trump, who has pared hundreds of environmental regulations, blasted China for “rampant pollution.”