Would you be interested in an asset class that’s not bonds, but safer than stocks, and yields 4.7%?

Of course you would.

Strangely, though, this class gets very little attention from many retirement financial advisers, and few retirees even guess what it is when I describe it to them. I struggled defining a web search that came up with more than a handful of articles per year about this asset class.

I’m referring to preferred stocks, which lie between stocks and bonds on the risk spectrum. They are called “preferred” because, in a bankruptcy proceeding, they are senior to the issuing company’s common stock. Their claim on the issuer’s assets is junior to bondholders’, however.

Preferreds are hybrid securities, neither fish nor fowl. On the one hand, they are more like stocks than bonds in that the company is not legally obligated to pay its dividend. But, on the other hand, they are more like bonds than stocks in that their dividends are usually expressed as an interest rate rather than a set dollar amount. So, like bonds, preferreds typically trade inversely to interest rates—rising when rates fall, and vice versa.

To complicate things further, preferreds come in many different flavors:

• One variety is the “cumulative” preferred. In this event and the issuer is unable to pay a dividend, unpaid amounts accumulate and are owed to the shareholder before any dividends get paid to common shareholders. Other things being equal, a cumulative preferred is safer than a preferred without this feature.

• Some convertibles are “callable” by the issuing company at a preset price. It often does so when interest rates fall, since by doing so the firm can substitute a lower yielding preferred. Notice that this call feature eliminates much of the upside potential a preferred otherwise would enjoy.

Given these intricacies, you might wonder if preferreds even deserve to be called a single asset class. It’s a fair question, and one I won’t try to answer. But I will note that, within the “equities” and “fixed income” asset classes, there is just as much variation and complexity as there is within the preferred category (if not more).

Regardless, this discussion shows that the devil is in the details. If you’re interested, by all means do your homework.

But how have they performed?

The $64,000 question, of course, is how have preferreds actually performed. The accompanying chart answers this question with regard to the S&P U.S. Preferred Stock Index, which S&P Dow Jones Indices describes as “an investible benchmark representing the U.S. preferred stock market.” 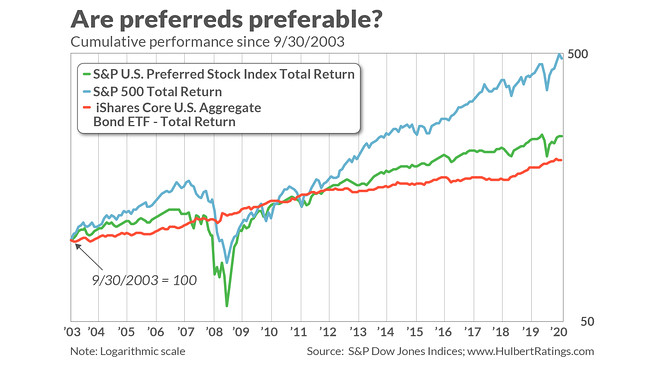 Upon digging deeper into the data, however, preferred stocks’ performance is less than it seems. For example, when judged by the volatility of returns, the S&P U.S. Preferred Stock Index has been riskier than the S&P 500—10% more, in fact. Since in theory preferred stocks are safer than stocks, it wasn’t supposed to turn out this way. It’s a losing combination to be riskier than the S&P 500 while also producing an inferior return.

Preferred stocks also failed to provide downside protection during the last two major stock market declines, as you can see in the following table.

If all you had to go on were these data, then no one would give preferreds a second thought. There are several reasons to nevertheless do so.

One is that there is the distinct possibility that the markets will behave in significantly different ways over the next several years. For one thing, interest rates are unlikely to decline as much as they did over the last couple of decades. On the contrary, the consensus bet is that rates will remain low for the foreseeable future.

It’s furthermore unlikely that the stock market will produce future returns anywhere as close to what they have over the last decade. Equity valuations are already in the overvaluation zone, and stocks won’t be able to count on lower interest rates to support their sky-high valuations.

In such a scenario, preferreds begin to look more attractive. The current yield of the S&P U.S. Preferred Stock index is 4.73%, for example. And, because interest rates are unlikely to decline very much from current levels, it’s unlikely that callable preferreds would be called away. Locking in a nearly-five-percent yield is not a bad prospect.

Exchange-traded funds are the preferred way of getting access to the preferred stock asset class, since they provide instant diversification. The list below shows the five preferred-stock ETFs with the most assets under management:

But, to repeat the caution from above, the devil is in the details. So by all means discuss the various possibilities with your financial adviser.

Mark Hulbert is a regular contributor to MarketWatch. His Hulbert Ratings tracks investment newsletters that pay a flat fee to be audited. He can be reached at mark@hulbertratings.com.