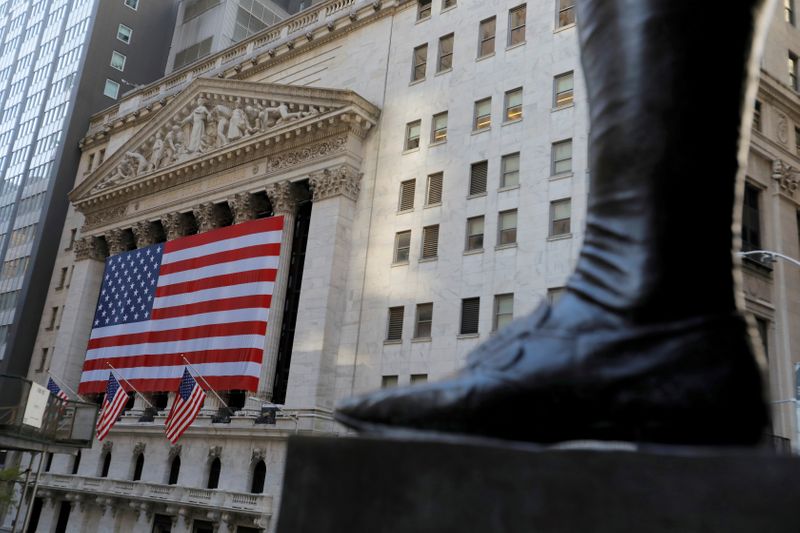 NEW YORK (Reuters) – As Democratic nominee Joe Biden edges closer to claiming the presidency, investors are focused on the still-undecided race for control of the Senate and the potential consequences for taxes, regulation and the outlook for more stimulus.

The benchmark S&P 500 has jumped nearly 4% since Election Day, driven in part by expectations that divided control over Congress will make it unlikely that a President Biden could pass his calls to increase corporate and capital gains tax rates.

The S&P 500 (SPX)dipped 0.2% in afternoon trading on Friday, while yields on benchmark 10-year Treasuries (US10YT=RR) rose to 0.82%, their highest levels since before the Nov. 3 election.

Biden took the lead over President Donald Trump in the battleground states of Pennsylvania and Georgia for the first time on Friday, putting him on the verge of winning the White House.

However, Georgia appears set for run-off races in January to determine its two Senate seats. Biden’s move ahead in Georgia focused some investor attention on chances that the Democrats could have more sway in the Senate. If they won those two run-offs it would give them a tie in the Senate and give Kamala Harris a deciding vote.

Two other Senate races remain undecided, though Republican Senators Thom Tillis of North Carolina and Dan Sullivan of Alaska are leading in those contests.

“There is some concern with regards to if Biden creeps ahead or wins Georgia, then there is chance that those seats will follow. That’s what people are reading into this. They’re saying, ‘OK, if there is this kind of momentum for Democrats, maybe the Senate (control) isn’t over yet.’ There’s a little bit of hesitation,” said Yousef Abbasi, global market strategist at StoneX Group Inc.

Justin Hoogendoorn, head Of Fixed Income Strategy at Piper Sandler (NYSE:PIPR) in Chicago, said “even if (Democrats) capture one Senate seat, it just becomes more plausible to push some legislation through. The closer they are to that, the more plausible.”

“If it’s contested, it adds a little bit of uncertainty” to markets after investors began pricing in a divided government, said Scott Brown, chief economist at Raymond James.

“I think the big risks to markets now is if this isn’t wrapped up swiftly – say by Monday- especially considering the level of traction a Biden presidency has gained over the course of the day,” he said. “Any lack of clarity over the result before Monday suggests markets will have to brace for a truly contested election with a series of court rulings.”

Still, despite the uncertainty, expectations for near-term market volatility have declined. The Cboe Volatility Index (VIX) has fallen more than 11 points since last Friday, on track for the largest weekly decline since early April. VIX futures have also dropped broadly.

Few investors are calling for a deep decline in stocks, buoyed in large part by unprecedented levels of financial support from the Federal Reserve. The central bank said Thursday that it will do whatever it can in the coming months to support the U.S. economy.

It created the fewest jobs in five months in October while the number of part-time workers increased, the clearest evidence yet that the recovery from the pandemic recession was slowing as new COVID-19 cases explode.

Some investors are starting to wade back into stocks that would benefit from a Democratic sweep of Washington. Clean energy exchange-traded funds jumped more than 1.1% in early trading Friday, while technology stocks – seen as more likely to face stricter regulations and more tax-motivated selling if the Senate flips to Democratic control – slipped 0.5%.

“Now the focus is shifting from the president to Georgia and the Senate because that is really going to define what happens next,” said Ken Polcari, managing partner at Kace Capital Advisors. “But if Biden gets in and the Senate flips, then we are back to the sweep.”