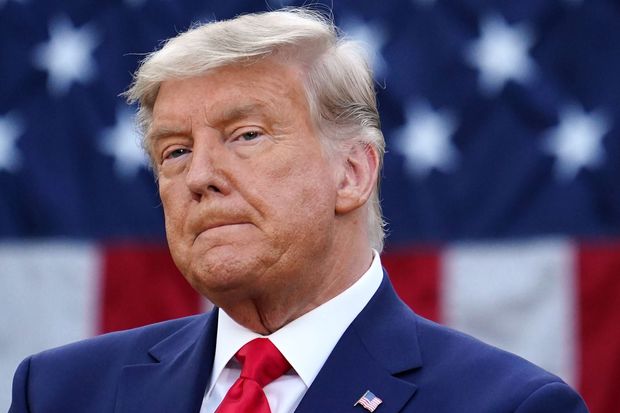 President Trump looks on after delivering an update on “Operation Warp Speed” for COVID-19 vaccine development at the White House on Friday. It was a rare public appearance for the president since the election, as his campaign team challenges the declared win for Joe Biden.

Three lawyers for President Donald Trump’s presidential campaign withdrew from a lawsuit the campaign had filed in Pennsylvania, one day before the case was to be heard by a federal judge, according to court filings.

The shake-up comes just days after the initial lawyers for the case from the Ohio-based firm Porter Wright Morris & Arthur  also dropped the case, amid public pressure and employee complaints that the firm was supporting a lawsuit that was baselessly undermining public faith in the electoral process.

“Our substitution of local counsel is consistent with routine managing of complex litigation,” Jenna Ellis, a campaign legal adviser, said in a statement Monday evening.

Following Scaringi’s appointment to the case, he requested that it be delayed so that he could prepare, despite the campaign telling the court that he “is aware of the schedule set by the Court in this matter and will be prepared to proceed according to that schedule.” Judge Matthew Brann quickly denied the request.

The hearing, set to begin at 1:30 p.m. Eastern Time, addresses Trump campaign concerns that some Pennsylvania counties, but not others, allowed political parties to contact voters to alert them that their ballots were at risk of being disqualified.

Though it’s unlikely that the case could lead to the Trump campaign overcoming president-elect Biden’s roughly 72,300 vote lead in the state, it’s difficult to see how the president could ultimately win reelection without reversing the outcome of the Pennsylvania election. Even without the Keystone State’s 20 electoral votes, Biden would sill have the necessary 270 to win the presidency, according to the Associated Press.

The AP has yet to call Georgia, though Biden’s more than 14,000 vote lead in that state is unlikely to be overcome in the ongoing recount process there, meaning that Biden is on track to win the state’s 16 electoral votes as well.