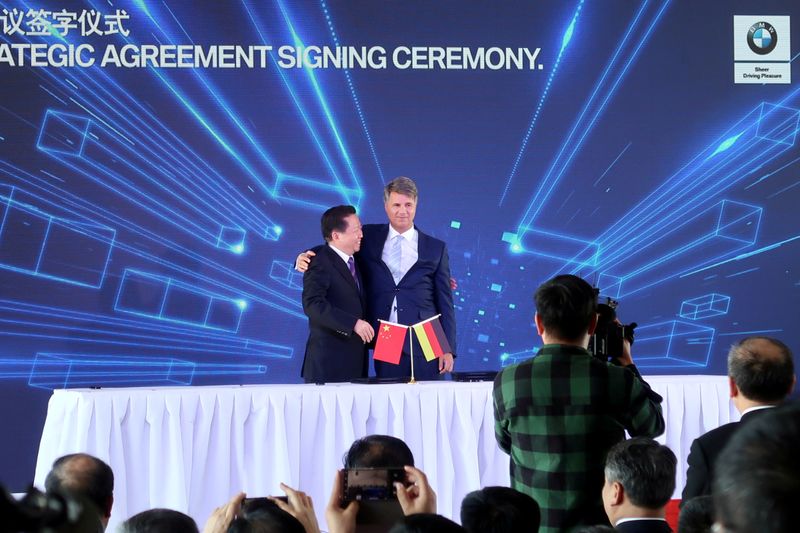 BEIJING (Reuters) – In October 2003, the first China-made BMW 325i sedan rolled off a new production line owned by the German luxury brand and its joint venture partner, Brilliance, a subsidiary of provincially owned automaker Huachen Group.

It was a milestone for the iconic Bavarian marque, whose cars proved massively popular in what became the world’s largest market. Over the next nearly two decades, the joint venture was a cash cow for both BMW and Huachen, which is run by the government of the northeastern rust-belt province of Liaoning.

But this month, Huachen stands on the brink of bankruptcy, defaulting on 6.5 billion yuan ($987.48 million) in debt obligations. Chinese regulators have launched an investigation into possible violations of disclosure laws by the company.

The defaults by Huachen and two other Chinese state-owned companies have angered investors, who say their faith in the firms’ top-notch ratings, seemingly sound finances and implicit state backing has been violated.

An examination of dozens of bond filings as well as interviews with former Huachen employees and experts shows how the carmaker squandered its advantage of having a gold-plated partner and was unable to leverage its know-how to develop competitive cars of its own. Some strategic missteps on the choice of models hurt it badly and an expansion into electric vehicles, funded by debt, came too late.

“Management’s key selling point to BMW to win the partnership was simple: as a smaller and weaker Chinese company, Brilliance will follow what BMW says without making trouble,” said a person close to Brilliance’s top management at the time, declining to be named given the sensitivity of the matter.

Bigger state carmakers like SAIC Motor and Guangzhou Automobile Group were actively involved in their joint ventures and used the expertise of foreign partners to build stronger domestic brands.

Huachen and its Hong Kong-listed Brilliance unit, which also has a joint venture with Renault SA (OTC:RNLSY), did not respond to requests for comment. BMW declined to comment for this story.

BMW told Reuters last week that the JV’s operations “are not directly affected by the payment difficulties” of the Huachen group. The German company has agreed to pay 3.6 billion euros ($4.2 billion) in 2022 for a further 25% stake in the venture with Brilliance, a deal brokered in 2018 by China’s Premier Li Keqiang and German Chancellor Angela Merkel.

A court has accepted a restructuring application by creditors of Huachen, which employs over 40,000 people and has assets worth 190 billion yuan, including the BMW Brilliance tie-up. Huachen said in a filing that if it is not able to restructure, it will declare bankruptcy.

Lou Weiliang, a Shanghai-based lawyer at Fangda Partners, said it was possible that all or part of Huachen’s stake in China Brilliance could be sold to a third-party under a restructuring, with proceeds used to repay creditors. But nothing will be clear until a restructuring plan is announced, he said.

As recently as May 13, in a call with nearly 90 investors, Huachen executives told creditors that money to repay debt due in the second half of the year had been “adequately arranged.”

But at the end of September, one month before its bond delinquency, Huachen transferred its prize 30% stake in Brilliance to a subsidiary, making it harder for bondholders to access those assets.

“After all, Huachen is a big state-owned company in Liaoning province, and we thought they had core assets including an attractive stake in the BMW joint venture,” said Shanghai-based hedge fund manager Vincent Jin.

In the early days of China’s automotive boom, Huachen was a competitive player in its own right, selling more than 200,000 vehicles in 2013 under its Zhonghua, or “China” brand.

“We thought we would be the first domestic carmaker to sell premium cars well in China,” said a former Huachen executive who now works for another Chinese carmaker.

But its competitors sped ahead while Zhonghua’s domestic sales slumped to just 25,270 cars last year and only 5,312 in the first three quarters of 2020, according to consultancy LMC.

Chinese rivals such as Geely and Great Wall developed stronger products and technology, while state-backed SAIC Motor and Guangzhou Automobile grew with the know-how of joint venture partners.

Huachen, by comparison, used a scattershot approach to planning, with vehicles such as a mid-size sedan and compact SUV that were not complementary, said Yale Zhang, head of consultancy AutoForesight.

“Zhonghua did not plan its products systematically,” he said. “That made their products fail to meet the fast-changing market demand in China.”

About a decade ago, consultants hired by Huachen warned it against plans to develop a premium MPV (multi-purpose vehicle), citing competition, an unclear outlook for the segment and Huachen’s technology disadvantage compared with the popular Buick GL8 made by General Motors Co (NYSE:GM).

“Qi was too confident about his plans. Unlike officials with deep experience in the auto industry who tend to seek opinions from different departments, Qi made decisions on his own,” one person familiar with Qi and Huachen management said.

Qi, who retired last year, could not be reached for comment.

Efforts to freshen Huachen’s portfolio helped lead to its current predicament. Fourteen bonds that Huachen has said it is unable to repay were issued between 2017 to 2020 to roll over debt, for working capital and to fund product upgrades and two plant projects.

In one 7.5 billion yuan project, Huachen planned a revamp of a factory to be completed this year to create capacity for 100,000 vehicles, including 30,000 electric ones, based on a new car platform.

The investment came way too late, as China’s saturated electric vehicle market underwent a painful consolidation after Beijing cut generous purchase subsidies. By then, rivals like Geely and BYD had rolled out more sophisticated EV strategies.

“Huachen missed the golden time when Chinese brands rose and all of a sudden it fell behind smaller rivals,” the former Huachen executive said.

As recently as August, Huachen Vice President Qi Kai, who is not related to Qi Yumin, told an industry conference that the group planned to sell around 1.95 million vehicles annually by the end of 2025, including 1 million from the BMW Brilliance JV.