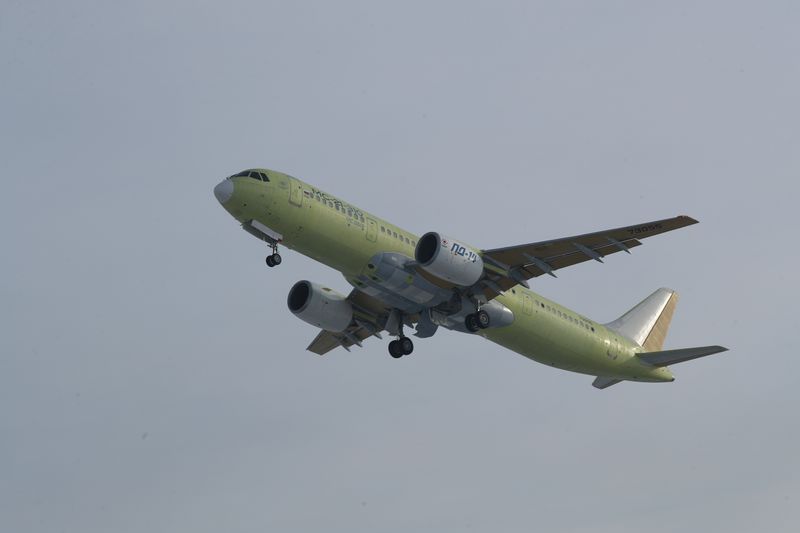 MOSCOW (Reuters) – Russia flew a new passenger airliner with domestically-built engines for the first time since the Soviet era on Tuesday, the start of what it hopes will be a revival of a civil aviation industry to challenge Boeing (NYSE:BA) and Airbus.

The medium-range MC-21 plane took off from a Siberian airfield powered by Russian-built PD-14 turbo-fan engines. The plane first flew in May, 2017, but with U.S.-made engines.

The MC-21 is built by Irkut Corporation, part of United Aircraft Corporation (UAC), and the engines are built by United Engine Corporation, all of which are majority owned by Rostec, Russia’s state aerospace and defence conglomerate.

UAC said the plane carried out a range of flight tests in a maiden voyage that lasted one hour and 25 minutes.

The Soviet Union was a major builder of passenger airliners used widely at home and in allied countries. But after the fall of communism, airlines largely retired their fleets of Tupolevs and Ilyushins for Boeings and Airbuses.

The Kremlin has been pushing to make Russia less reliant on Western imports, particularly since 2014, when the United States and EU imposed some financial sanctions in response to Russian military intervention in Ukraine.

Moscow had planned to begin delivering the MC-21 to buyers in 2019, but that date was pushed back, with Rostec saying U.S. sanctions had forced manufacturers to replace composite materials in the wings with Russian-made equivalents. The first deliveries are now expected at the end of next year.

Two modifications of the plane, which can seat 130 to 211 passengers, will be made available for order – one with U.S. Pratt & Whitney PW1400G-JM engines and the other with the PD-14 engines, UAC said.

Orders have been placed for 175 of the aircraft, with state carrier Aeroflot accounting for 50, UAC said. It did not say how many would include the Russian-built engines.