Home
Stocks
MemeMoney: The Trump SPAC might have just given Gensler and Warren an accidental invitation to start probing it
Prev Article Next Article 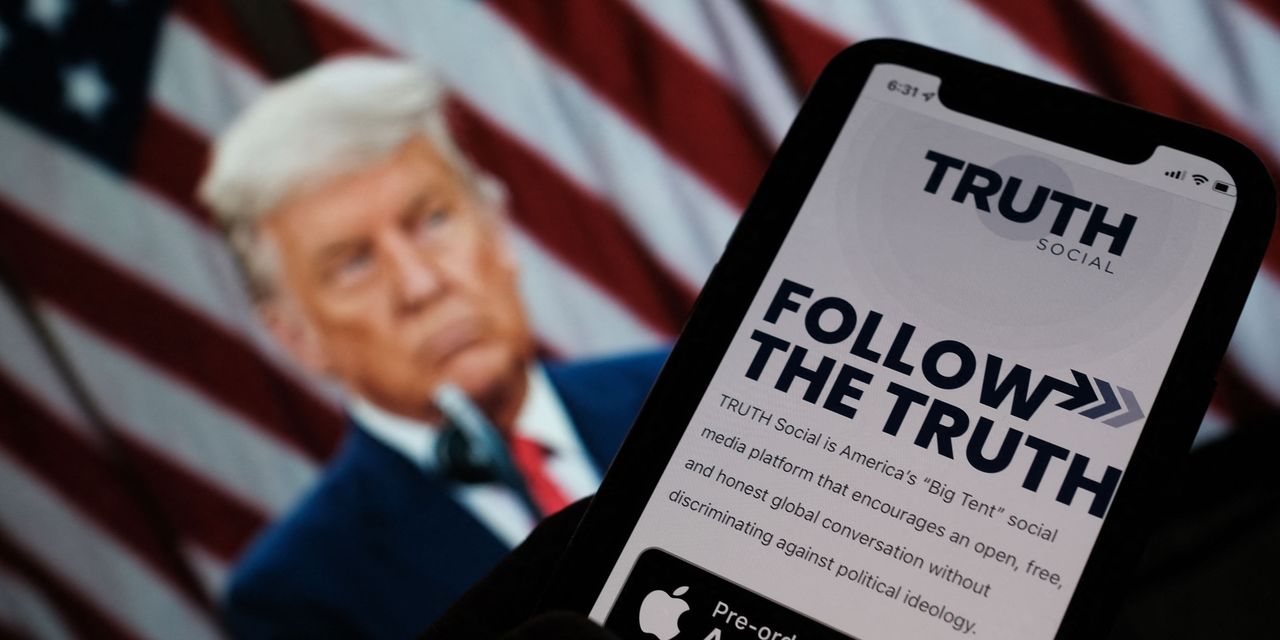 When you’re the hottest SPAC on the market, thanks to a not-yet-finalized merger with a not-yet real company selling a very real political product, you might be wise to recognize the regulatory target on your back and act accordingly.

Or you can do what Digital World Acquisition Corp.
DWAC,

Since its IPO on Sep 3, DWAC stock has rocketed as high as 1,650% thanks in large part to the Oct 21 announcement that it plans to merge with Donald Trump’s nascent Trump Media & Technology Group, an operation that has released literature planning multimedia market domination but is so far only still on the cusp of launching a social media app called TRUTH.

The only financial metric that DWAC can actually sell to investors in regards to TMTG at the moment is the 76 million votes that Trump got in the 2020 election, hoping that translates into 76 million customers for what they say will be a flotilla of new media products.

Nonetheless, DWAC’s current market capitalization of almost $2 billion, and its affiliation with the Trump brand, put the SPAC in the headlines and pushed its stock price as high as $175 a share as retail investors piled in before falling back by more than 60% after many of the SPAC’s hedge fund sponsors sold their shares at huge profits.

That kind of action, combined with the tertiary presence of Trump himself, has prompted some widespread speculation that SEC Chairman Gary Gensler, a Democratic appointee who has been openly critical of SPACs, is readying a regulatory colonoscopy for DWAC.

That talk has only intensified with reports circling that the SPAC’s founder and CEO, Patrick Orlando, was discussing deals with Trump and his associates as far back as March 2021, well before DWAC’s creation and a potential violation of the very thin rulebook that governs SPACs.

So it raised a few eyebrows in regulatory circles this week when DWAC filed a 12b-25 form with the SEC, often referred to in securities law circles as a “Form NT” or “Not Timely,” meaning paperwork that is essentially a publicly listed company telling Gensler that it needs an extension on its quarterly reporting homework.

If Gensler is planning a probe into DWAC’s financial backdoor, Tuesday’s filing was seen as an invitation to not go gently.

And it has perhaps already prompted a response.

On Thursday morning, Senator Elizabeth Warren released a strongly-worded open letter to Gensler encouraging him to dig into DWAC, citing the reports that question the timeline of Orlando and Trump’s plans for TMTG and directly accusing the SPAC of playing fast and loose with their SEC filings.

“Press reports and the corporation’s own SEC filings appear to indicate that the actions taken by DWAC and Trump Media and Technology Group violated the Securities Act of 1933,” Warren, who is also a former Harvard Law School professor, writes. “SPACs are required to disclose any direct or indirect conversations with potential target companies, protecting both the early investors and retail investors joining at the initial public offering.”

So, broadly speaking, it does not appear to be a great time for DWAC to tell the SEC that it is not ready to produce its first quarterly earnings report, a concern that should be compounded by the fact that Gensler has already cracked down on Form NTs, fining 8 companies in April for failing to file them properly.

To be clear, Form NTs are not uncommon and are used by many companies to ensure that they aren’t rushing to get something out and making errors that could result in much worse treatment from the SEC than simply being tardy to the reporting party.

According to Spencer Feldman, a securities lawyer and Partner at Olshan Frome Wolosky LLP, the only real issue with Form NTs is not missing the new deadline.

“You should only file a 12b-25 if you have some degree of confidence that you’re going to file your 10-Q in 5 days,” Feldman said of DWAC.

And Form NTs for SPACs appear to be on the rise, thanks to another Gensler warning shot that requires the blank-check companies to report their redeemable shares as temporary equity as opposed to permanent equity, a move that would change how many SPACs are listed on the NASDAQ.

Chamath Palihapitiya’s sixth SPAC, Social Capital Hedosophia VI, for example filed its own Form NT on Tuesday directly citing the rule change as a justification for why it needs more time to file its quarterly report.

According to DWAC’s filing, the company “has been incurring monthly operating expenses of approximately $15,000 per month and expenses in connection with its search for targets for its initial business combination,” but since DWAC announced its merger target less than two months after its IPO, the expenses may be less than $30,000.

DWAC also justifies its extension by claiming that it “will not generate any operating revenues until after completion of its initial business combination,” but that’s literally the description of how a SPAC works.

For those reasons, DWAC contends in the filing, it “cannot at this time estimate what significant changes will be reflected in its results of operations for the quarterly period ended September 30, 2021.”

Orlando did not respond to a request for comment, but the language in the filing, which is strikingly different from that filed by Social Capital and other Form NTs filed in recent weeks, may attract Gensler’s interest.

Add in a couple more facts. The SPAC is listed with the SEC as headquartered in an office owned by shared workspace company WeWork in Miami, and its CFO, Luiz Philippe of Orléans-Braganza,  is a Brazilian businessman and politician currently serving in that nation’s government, who, as a descendant of the early 19th century Brazilian monarch has proposed a new constitution for the South American country. So it might not be surprising if even more questions might be asked about what DWAC is up to, who is in charge, and why it is having trouble filing a routine quarterly report.

And that’s also where TMTG plays into the narrative.

Most SPACs merge with an existing company that can provide things like revenue figures and forward projections. So far, TMTG remains a promise of a “non-woke” media operation, an idea that obviously appeals to many consumers but is not an actual company with an actual product yet.

And the thing about SEC filings is that they often require actual information from actual companies to make actual sense to people investing their actual money.