Home
Stocks
: Kroger employees are surrounded by food at work — but many struggle to afford food and rent, says a survey of 10,200 workers
Prev Article Next Article 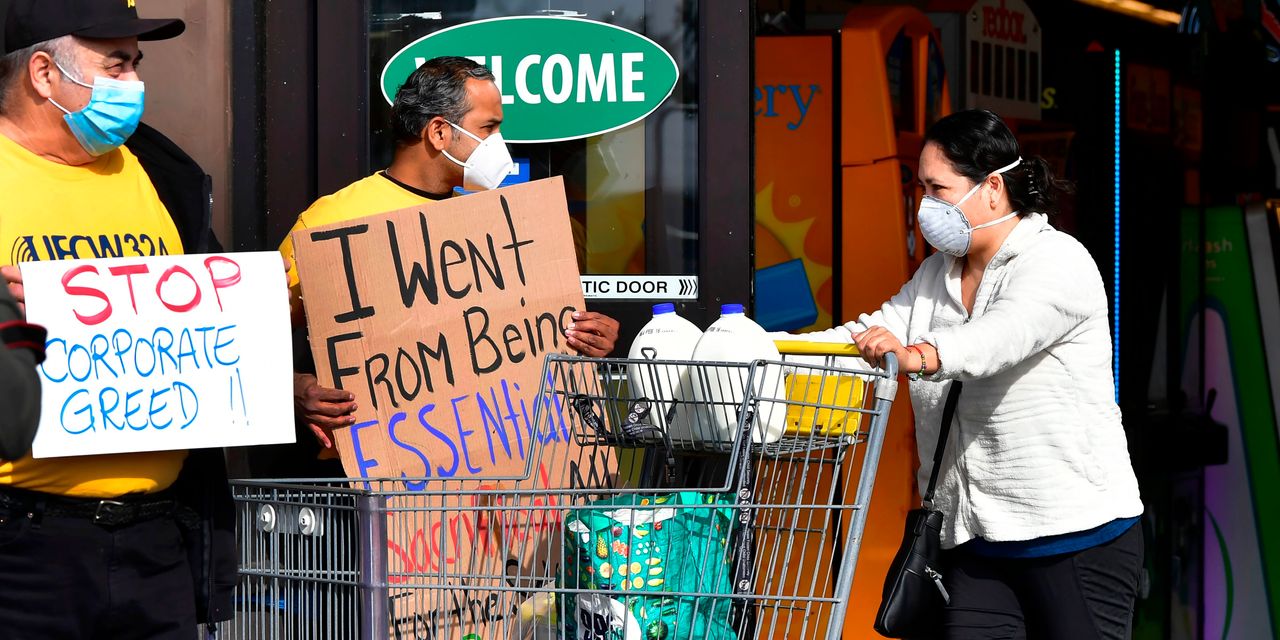 Many supermarket workers struggle to put food on the table even as they help feed their communities, according to new research on Kroger
KR,

employees released as the pandemic continues to expose and exacerbate essential workers’ financial and health challenges.

Some 78% of workers at eight Kroger-owned grocery chains — including King Soopers, Ralphs, Food 4 Less and City Market — say they have “low” or “very low” food security, said the report from the Economic Roundtable, a Los Angeles-based nonprofit research group, and Occidental College.

While “food surrounds Kroger grocery workers every hour on their job,” the report said, “these workers cannot afford balanced and healthy food.”

“They run out of food before the end of the month, skip meals, and are hungry sometimes,” the researchers wrote. “Those with children report they go hungry to provide food and other essentials for their children.”

“‘They run out of food before the end of the month, skip meals, and are hungry sometimes. Those with children report they go hungry to provide food and other essentials for their children.’”

The researchers received complete responses from more than 10,200 Kroger workers in Washington’s Puget Sound region, Colorado and Southern California, who were surveyed at the request of the local United Food and Commercial Workers unions.

Forty-four percent of respondents said they’re unable to pay their rent, 36% worry about eviction, and 14% are experiencing homelessness or have experienced it in the past year. Nine in 10 workers said increases in food and rent costs had surpassed pay increases, and 67% said they didn’t make enough money to afford basic monthly expenses.

On the job, two-thirds of respondents said they were dealing with pandemic-related customer issues — a quarter dealt with customers threatening violence — while nearly six in 10 reported having work schedules that change at least weekly, which took a toll on some workers with young kids.

The report came as 8,400 unionized workers at Kroger’s King Soopers stores went on strike in Denver this week, having called for a new contract ensuring better compensation and a safer workplace. Kroger, for its part, called the strike “reckless and self-serving.”

“‘The implication by the Economic Roundtable that The Kroger Family of Companies does not care about the wellbeing of our associates and their families is patently untrue.’”

Kroger didn’t respond to MarketWatch’s request for comment on the Economic Roundtable analysis or strike, but the company called the report’s findings “misleading” Wednesday as it released an analysis of its own, looking at how its nearly 85,000 hourly workers in California, Colorado, Oregon and Washington are compensated.

The Kroger-commissioned report found that these hourly workers received higher wages and benefits (an average of $18.27 an hour plus $5.61 an hour in healthcare and retirement benefits) than their retail-industry peers overall; that the company provided both monetary and non-monetary help to workers and their families; and that it had invested money and enacted policy changes to ensure worker safety during the pandemic, among other points.

“The implication by the Economic Roundtable that The Kroger Family of Companies does not care about the wellbeing of our associates and their families is patently untrue,” Tim Massa, Kroger’s senior vice president and chief people officer, said in a statement. “I am disappointed the UFCW has chosen to pull together such a misleading and untrue report — which leads me to believe they no longer have our associates’ best interests at heart.

The UFCW report made several recommendations to boost worker wellbeing, including raising minimum pay to $45,760 a year, providing housing assistance and childcare subsidies, and discounting groceries by 50% for employees.

A report last May noted Kroger’s CEO received $22 million in compensation in 2020 even as it phased out hazard pay for its workers in the pandemic’s early months. A spokesperson at the time told Bloomberg that “Kroger continues to reward and recognize our associates for their incredible work during this historic time,” and noted the company was offering $100 to workers who got vaccinated against COVID-19.

While Kroger, like many large companies, has increased wages during the pandemic, a Brookings Institution analysis published in December contended that surging inflation had erased at least some of those gains for workers. The researchers analyzed hourly workers’ wages at 13 large American companies and confirmed data directly with the companies.

Kroger, for example, increased its average hourly wage from $15 in January 2020 to $16.25 in October 2021 — a nominal increase of 8% that translated to a 1% hike after adjusting for inflation, according to the Brookings report.